When we lost my very first dog, Shelby, to cancer, I frantically searched for signs that she was still with us in spirit. I was looking for something tangible….seeing her ghost running across the field, feeling her brush against me, or something along those lines. It never happened.

Later that same year my mother died. That was when I saw my first sign, not of Shelby, but what I believe was from my mother. A stray cat wandered into our lives, and taking him in gave me a much-needed focus and purpose. My mother had shared her love of cats with her children. I think that opened up my mind and heart to signs that would come later.

It was five years later when our Lab mix Maggie was hit and killed by a car. Not long after her death, we headed to our camp as was our habit on weekends. Camp became a painful place for me, because that was a place that Maggie loved and our time there was wrapped around playing and hiking with her and her brother Kobi. One morning when sleeping in with Kobi, Maggie came to me in a dream. In that dream I was able to hold her and kiss her and say the goodbye I never got to in real life. I will never forget how real that dream was, and how much I needed it.

My father also came to me in a dream when he died years later. At the time I had the dream I didn’t know he had passed, and it wasn’t until days later that I remembered the dream and knew it had come at the exact time. My father and I were somewhat estranged, and in my dream he told me that he understood why I had felt and acted the way I did. No matter our differences, we always loved each other.

Signs came from our other dogs after they passed as well. Moses also guided a stray into our yard shortly after he passed on, and reuniting that dog with its family was a welcome distraction. Moses also gave us the sign that he and his siblings were still with us all these years later when we moved to our new home. You can read about that in my post “A Sign From Above“.

Kobi’s signs are less specific but come every time Luke does something exactly like Kobi used to. His signs are intertwined with Maggie’s, since the two of them were best friends in life, and we always felt that Maggie was the one who sent Luke to us, to help us through Kobi’s loss just a few months later.

It can’t be surprising that Sheba is giving us her own signs as well. We helped Sheba to the Rainbow Bridge on a Wednesday evening. That Friday was the presidential inauguration. I had already been drafting my tribute post to Sheba in my head, and was thinking I would tie in the song “You are My Sunshine.” I hadn’t planned on tuning in to watch the inaugural parade, but when I turned on our local news that’s what was on anyway, so I left it. It wasn’t long before I heard one of the marching bands playing that exact song.

My post title was settled. The next day I almost wondered if I’d imagined that, and I even did a google search to confirm that I didn’t. Then I sat down to write that post. As I got ready to write the words “we haven’t seen the sunshine since Sheba passed”, which we truly hadn’t, the sun broke through the clouds and shone down on where I was sitting. It was only out for a very few minutes and we didn’t see it again for days.

I am still feeling and seeing Sheba with me.  Last week, when I logged onto Facebook, the above photo popped up as one of my memories. And just this past weekend when shopping with a friend, I saw a literal sign: 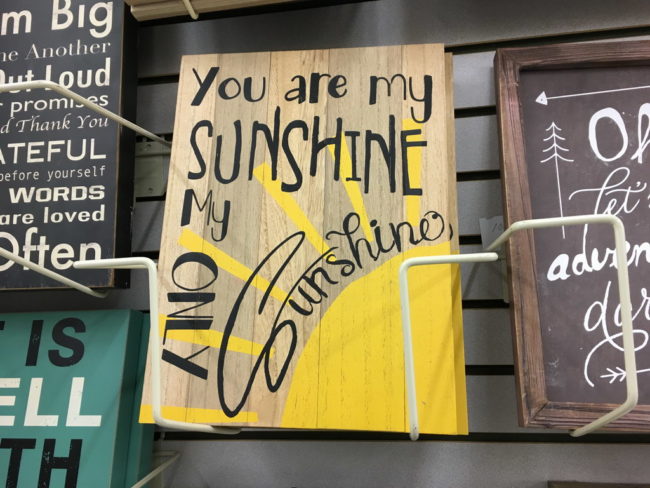 Are you open to, and do you believe in signs from above? Every one of the circumstances I described can have a logical, earth-bound, explanation. Maybe it’s just me interpreting them in a spiritual way. Most of all, does it matter, if it gives me comfort in feeling that my loved ones are still with me? It doesn’t matter if skeptics think those of us who believe are crazy. What matters is that we believe, and that opening our minds and hearts to these signs gives us the comfort we need in grieving our losses.