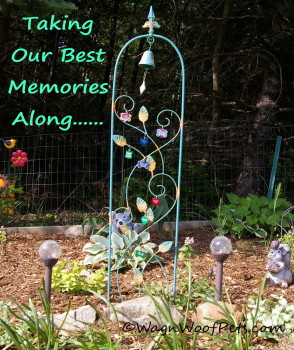 With the sale of our house and move to our new home now complete, the subject had come up of the bittersweetness of leaving behind a home where we have so many happy memories with so many pets. In the summer of 2014 I completed a project at our previous home that was very close to my heart – a memorial garden for all of those pets. I am sad to leave that behind, but I will be taking many parts of it with us, and creating a new garden at our new home.

This trellis holds a tag for each pet that lived with us at our previous home but have since passed on. In this series I am sharing about each of those pets and how their memories tied in with our home. 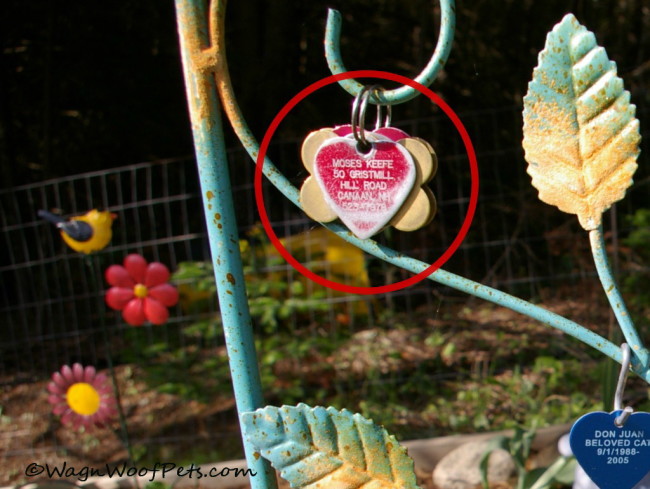 Things couldn’t have worked out better for our final post in this series. The final pet that joined our household at our previous home, and is no longer with us, was our golden retriever Moses. Moses was Sheba’s littermate, and joined our home at Christmastime in 2004.

There were occasional issues with Moses and the other dogs, but mostly he was just a big goofy love. Moses loved to play ball with his sisters, though he wasn’t the most energetic of the group. He mostly liked to lie down and wait for the ball to come to him. Strangely, Luke has his same style, even though we sadly lost Moses to cancer the summer before Luke joined us.

There was one special thing that Moses did that I had never seen Luke do though. As long time readers know, Moses was part of the original Wag ‘n Woof Pets Crew, and I first wrote about this in my post “The Rules of the Game“. I want you to know that I’m not making today’s story up, and in the second paragraph of that post I tell how Moses used to pass the ball to Cricket after he caught it. Their passes were flawless….he dropped it from his mouth and she would catch it before it even hit the ground. It was only him that did it, Sheba has never done it….she just drops it on the ground for Cricket.

A couple of days after we moved into the new house last week, I was out in the yard playing with the dogs, when I saw Luke pass the ball to Cricket in the exact same way Moses used to! It brought tears to my eyes….because I needed to know that what I wrote through all these posts was true, saying that our past pets that were left behind in that memorial garden were coming with us to our new home. Not just by their memories, but I wanted to know their spirits were here with us as well. That pass from Cricket to Luke was my sign, and my heart warmed knowing that they all truly have come with us.

I took some video of the pass. It wasn’t just a fluke, they have continued to do it! You have to watch closely, as they move pretty fast when passing it off!

You can read more about Moses in my post “Puppy Dog Tales – Moses, Moses“, and you can also read my previous posts in this series by clicking the links below: