For the first time since it’s inception, Barking Dog Organic Farm is without a barking dog. We lost our precious Luke this week, after a short illness. He was just 8 years old.

Luke took his job as Chief Barking Dog quite seriously, but he took his job of loving us even more seriously. He had his quirks, fears and phobias, but he was the most loving dog with us ever. Sometimes he liked to be off on his own, but mostly he wanted to be next to us. He loved to give and receive kisses.

Luke enjoyed chipmunk hunting and watching TV (and barking at any animals – or people acting weirdly – on the TV). He loved food and was an unrepentant counter surfer. He loved stuffed toys that he could destroy, and his favorite treat toy was his West Paw Quizl. We filled that with peanut butter and treats whenever he had to be left home alone. Thankfully, that wasn’t very much lately since his Dad retired, and I know he was happy to have Dad home with him more.

He took lots of walks in our woods with both me and his Dad, and he loved sniffing for wildlife that had passed through. He left his own marks to let them know those were his woods!

Luke had a lot of fears and one was of strangers. The one person he bonded with other than us was my sister, Lynn, but other than her his world was small. We did our best to make that small world as happy as possible for him, and I think he was content to be a homebody just like his Mom and Dad.

We are devastated and heartbroken and the house is too empty and quiet without him. He left his farm birds behind to make a racket outside and ease up some of that quiet. He wasn’t allowed to play with his birds since he got too rough, but he used to love to run along his fence with the guinea fowl!

He joins his sisters Cricket, Sheba, and feline Samantha at the Rainbow Bridge, and his brother Kobi who taught him everything he could in the few months they had together before Kobi passed. He’s also meeting other canine siblings Moses, Maggie, and Shelby and too many cats to name that came before him. He had quite the welcoming committee and we know he’s in good paws. 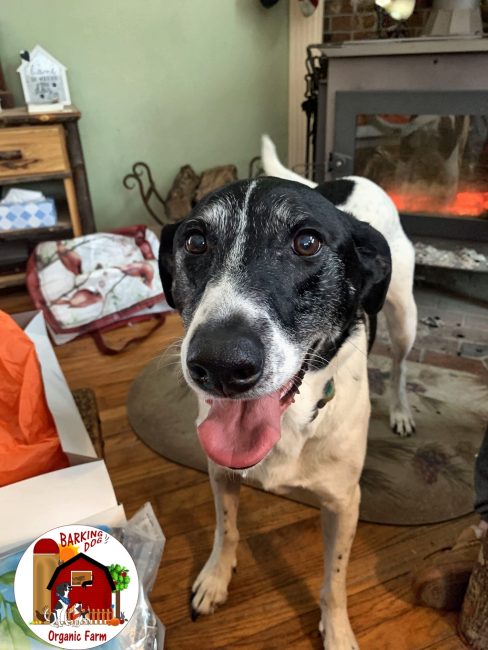 This loss has hit Luke’s Dad and me hard. Being an only dog, Luke got all our love and affection, and I think having no other furry companions to console us now is making it tougher. We felt Luke wanted to be an only dog. Even though that might not have been our first choice, we wanted nothing more than to make him as happy as possible.

I cannot express enough what a loving dog he was with us. The love and companionship he gave us far outweighed any of the difficulties we had because of his fears.

The neighbors, UPS truck, and FedEx truck now drive by with no one to let us know. Thank goodness for the crazy guinea hens who are at least making noise outside. The house is too quiet and empty. There is no one to lick the plates or get the last bite of whatever we eat. Our coming and going from the house is without fanfare. When the time is right, we will rectify that, as we know Luke and his angel siblings would want that for us.

I will continue to blog about the farm, I’m overdue for an update on the latest newbie chickens, but they are doing well! Luke enjoyed watching them grow up while they were still in the house. ♥