Nothing makes me happier than being outdoors. I crave it when I am stuck inside for any length of time. I love the fresh air and the beauty of nature more than I can adequately express. I love the changing of the seasons and the unique artistry of each one. It’s something I’m thankful for every morning I wake up. I love the sunshine, the rain, and even the beauty of snow (though winter is my least favorite season!).

I try to do everything I can to respect nature – we garden and raise our birds organically. We plant flowers that attract pollinators, and we use as many natural products as possible, and that’s mostly what I sell at my shop. We try to reduce waste by using less plastic (isn’t that challenging in this day and age!) and recycling. I have t-shirts that read “Love Your Mother Earth”,  “Proud to be a Tree Hugger”, and more. 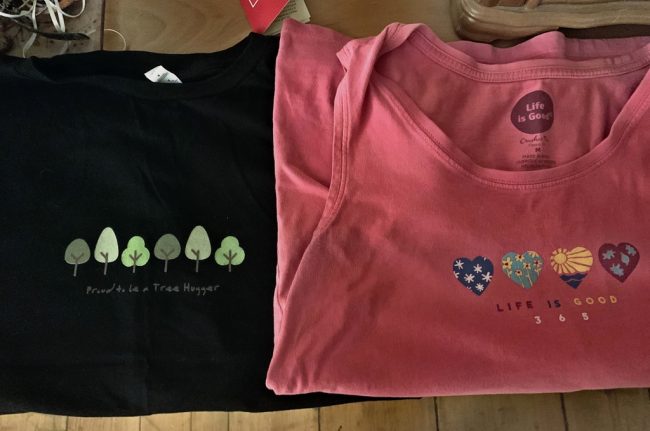 However, if you watch nature/wildlife shows or are a farmer yourself, you probably know and see that Mother Nature isn’t all sunshine and rainbows. Her reality is sometimes harsh. As a farmer, we see it only too often, between losing members of our flocks to predators, or fighting to get a garden to grow, which is challenging between the weather and the insect pests and various diseases that plants can contract. Even those pretty little songbirds can wipe out your berry bushes if you don’t find ways to protect them!

We had just come back from a nice walk with both dogs. Well, maybe I should say “energetic” walk – these two are going to need some work to get them to walk nicely – they are both pullers and strong! But that’s a subject for another post!

Copper Sue had gone outside, and we were down the other end of the house for a minute when we heard her whining at the door. We assumed she had just realized she was the only one outdoors while the rest of us were inside, so we let her in and didn’t think too much about it. I went back to do something else when my husband called me and said he thought she might have something stuck in her mouth. She was pawing at the side of it so I looked around in her mouth but couldn’t find anything. I noticed she was drooling too which seemed odd.

But she seemed to stop the pawing and even took an ice cube and then laid down to snooze; the drooling also seemed to lessen. I started baking and after adding some coconut oil to the dog cookie ingredients, I offered Max the spoon to lick since he was at my side “assisting”. Copper Sue jumped up from her snooze and wanted a lick too – except she could not lick the spoon. I promptly hauled her mouth open again to look and saw that her tongue was extremely swollen!

While trying not to panic I told my hubby we needed to get her right to the vet, and I picked up the phone to let them know we were coming. I was grateful that this happened during regular office hours so they could get her right in. I was also grateful that our vet is only a 7-minute drive away! We realized she must have been stung by a bee, even though I never saw anything like that around her mouth. She also acted fine so that reassured me, though of course, did not stop me from worrying from the time hubby got her into the car, and then called me from the vet’s office (probably only 15 minutes or so later).

She had indeed been stung by a bee – on her tongue! They immediately gave her a Benadryl shot and then decided to keep her for observation for a while. As it turned out, they had to give her additional shots of a steroid to finally get the swelling to come down.

The vet said that it was not an allergic reaction – just a reaction to the sting itself and she was able to come home once the swelling went down more (she had been stung one other time, on her belly, and never had any adverse effects that time). She came home and was able to eat her early supper not too long afterward. The vet’s office mentioned that maybe she had found a bee’s nest, so I went to investigate the yard and sure enough found a ground nest right in my herb garden.

We had found a similar one in another area of the yard a week or two before that, in a place the dogs don’t get free access to, so it was not quite as worrisome.

But what to do about a bees’ nest in your dogs’ yard, when everything your nature-loving self reads says how important pollinators are to our eco-system? Do you kill them? These were most likely yellow jackets so aggressive bees and not your everyday beneficial honeybees or other species that only sting when threatened.

We are trying to get rid of the bees, though it has not been easy. If you are a tree-hugger, nature-loving freak like me, is that what you would do? In the end, our dogs are the most important thing to us, and we’re going to do whatever we need to protect them, even if we’re not 100% comfortable with it (and don’t worry, my hubby had no qualms about doing away with them!).

Also, THOSE bees are almost gone, but we know we have no shortage of pollinators around here – the bumblebees and butterflies have been prolific this year – we have many flowers to attract them.

That is something I’ve learned from farming too – sometimes you must do things you don’t like to protect your family and flocks. I think that Mother Nature, with her mood swings and mixed messages, ought to understand that too.

I’ll have a farm update soon – lots has been going on! I’m hoping I finally have my mojo back!