This will be my last post in the My Life of Pets series.  It lasted much longer than I thought it would!  It has been fun for me reminiscing and sharing all my past pets.  I hope you have also enjoyed the photos and reading about them. 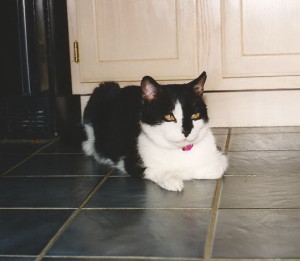 1999 was a rough year for my husband and me.  In early Spring, my Dad had to have major surgery.  It all went fine, but it was a stressful time for my Mom and all of us kids needed to help her through it.  Right after that, our dog Shelby was diagnosed with cancer. While in the middle of her treatment, in late Spring, our cat Bones was killed by the neighbor’s dog. Then in late October my mother died suddenly. 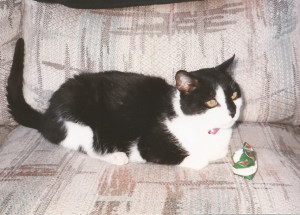 So when a stray cat showed up at the store I work at, I couldn’t help but believe that my Mom had sent him to me to give me a distraction while dealing with my grief.  I believe that caring for others can help us take the focus off of our own pain somewhat.  This cat who was hanging around at our store for several days was a chubby fellow; in fact I at first thought he was a pregnant female!  You’d think someone with as many cats as I’d had would have known better.  However, that was probably the thing that motivated me to want to bring him home.  When we figured out he was actually a male, that is when he became our Franklin.  We checked around but never could find where his home had been. 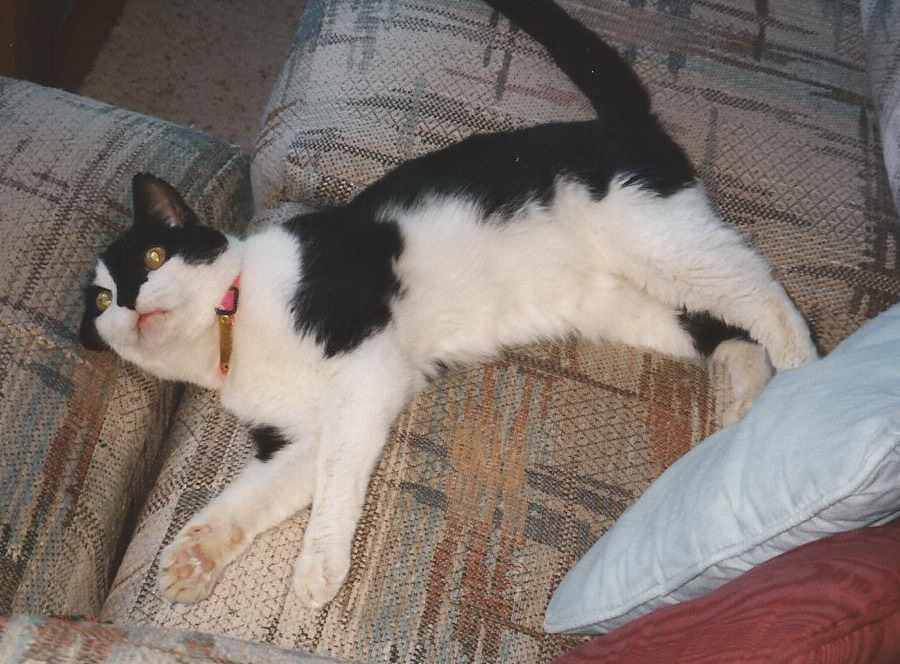 Franklin was a sweet boy.  I seem to remember that he didn’t get along so great with the other cats, he was a loner, but they all tolerated each other fine.  He was a very affectionate and loving boy with us though. 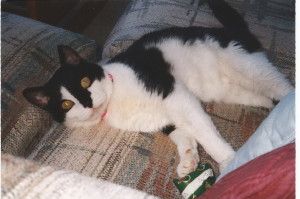 Franklin was not very healthy, however.  We spent a lot of time with him at the vet and a lot of money!  He had various illnesses including hyperthyroidism.  He never liked taking his pills for that!  Ultimately he was diagnosed with mouth cancer, which there was really nothing to be done for, so we had to have him put to sleep.  We had only had him for about a year.  Sometimes we wondered if we had made the right decision in taking him in.  But we had enjoyed our time with each other, and we were happy that we had given him a warm safe home to live out his last year in. 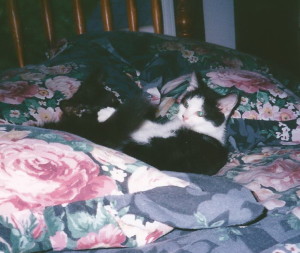 In 2002 we were down to two cats, and Don Juan was getting on in years.  We didn’t want Conrad to end up being alone.  My brother’s cat had kittens, so we decided to take two of them home, a black and white one who we named Katie, and our fluffy black girl, Samantha (who is still with us).  I think the original plan was only one cat….but you know how that goes. 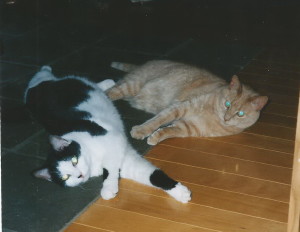 This turned out to be a wise decision, because Katie and Conrad became fast friends. 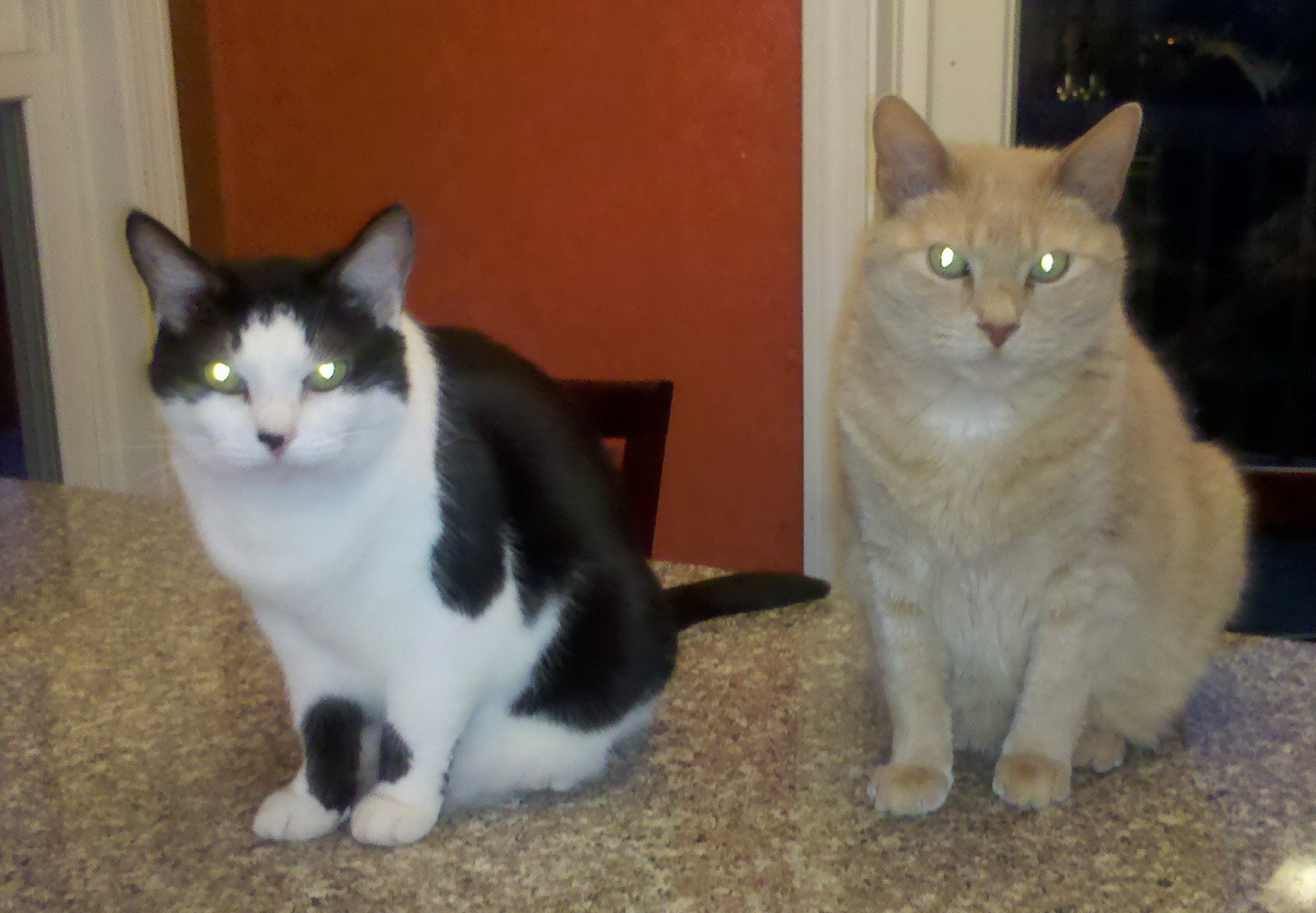 Katie didn’t like to be picked up or  held, but she was sweet and affectionate nonetheless.  She got along well with everyone, including the dogs. 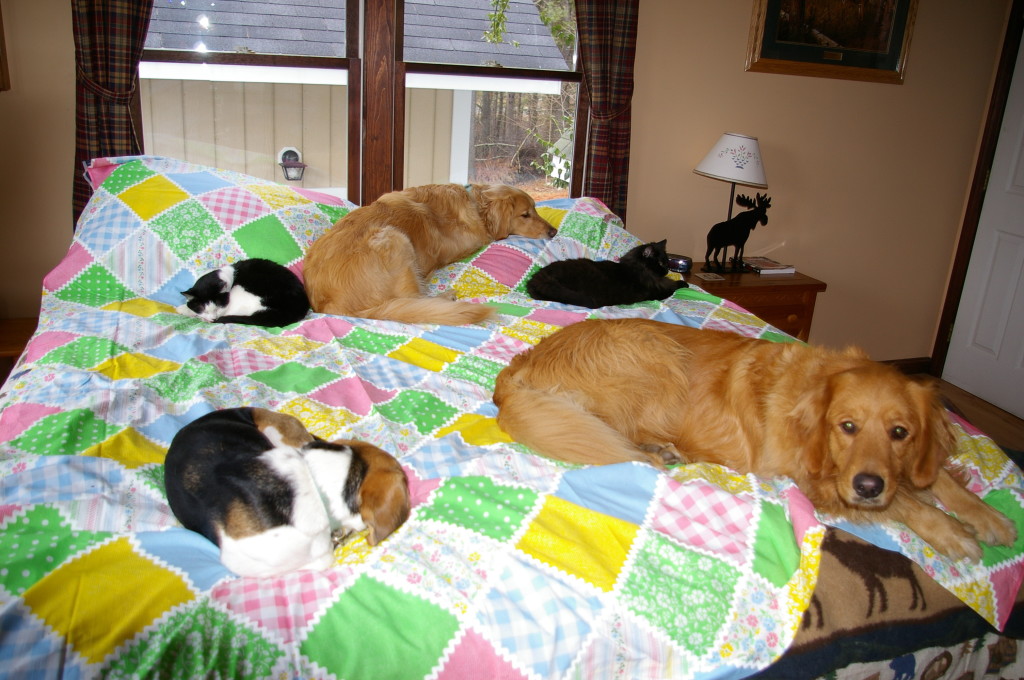 One of her favorite things to do was eat!  She was known for even stealing the dogs’ treats if we left them out on the counter.  She would even chew her way through plastic bags to get to something. 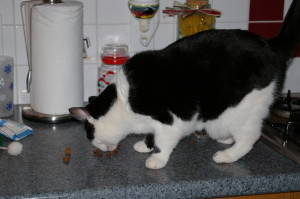 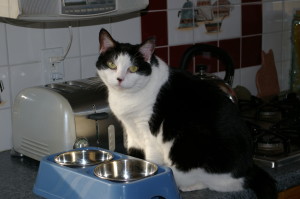 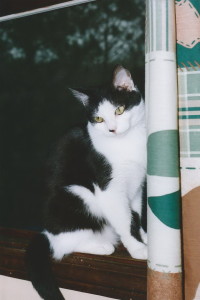 Because of her great appetite, when she started losing weight and not eating as much, we knew something was very wrong.  She had a tumor near her intestines.  Our vet performed surgery in the hopes of removing it, but when he got in there he found cancer everywhere.  She would have had no quality of life if we had tried to save her, so we had to let her go.  We miss her very much, though I think her brother Conrad misses her the most. 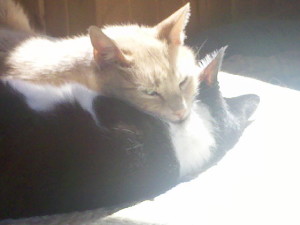 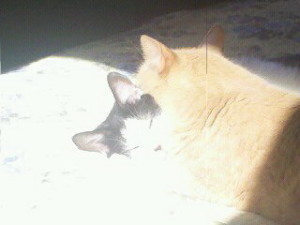