I asked our cat, Conrad, if he would like to tell his story like his sister Samantha did.  He was not interested.  Conrad is very lazy.  Perhaps he will have some comments later, if he ever climbs off the satellite TV box in our bedroom.  That is his favorite spot, and if he is not there, he is probably up on the kitchen counter looking to be fed.  That is his second favorite spot….or maybe it’s vice versa.   It is difficult to be sure which thing is more important to him.

We adopted Conrad from our local humane society in 1999.  At that time, he was probably around a year old, so we guess him to be about 14 years old now.  That is 72

in human years.  I still remember well the day we went to the shelter.  After filling out all the paperwork and being approved, we went to visit all the cats they had.  There were probably 15-20 cats there at the time, and we held just about every one of them!  They were all sweet, but none had really struck us as “the one”.   There was still one buff/orange colored cat staying in the back of a cage.  I tend to go for the underdog (cat)….and I insisted we needed to see him also.  I had a buff colored cat named Taffy when I was a teenager, and this cat looked a lot like him.  They took him out of the cage and handed him to my husband, and he immediately snuggled into Tom’s arms.  That was it; we knew he was the one!  When we went to transfer him into a carrier….he got away….ran off and tried to hide from us!  Perhaps I should have seen this as a sign of how life was going to be with Conrad.  We were not deterred, and he was recovered, and made it home with us.

He spent the first couple of weeks with us in his own private room.  At the time we had one other cat and our dog Shelby.  Even though we gave him all the privacy he needed, he still wouldn’t come out from under the bed for the first week.  Eventually we won him over and he joined the household.  He was fine with our other cat, but always leery of Shelby.  To this day he is skeptical of our two large golden retrievers, but tolerates the beagles a little better (just a size thing I believe).  He doesn’t seem to learn that if he doesn’t run, they won’t chase him.  His original personality of being skittish has never really changed.  Many people have come to our house and never laid eyes on Conrad.  Or if they are lucky enough to see him, they cannot approach without scaring him away.  But he loves us, he still snuggles in when we pick him up, as long as he is in the mood (it is best to avoid him when he’s not in the mood!).  He does get used to people that are around enough, such as our pet sitters.  I don’t know what happened to him in his life before he came to the shelter (he was brought in as a stray), but it obviously left some scars on his soul. 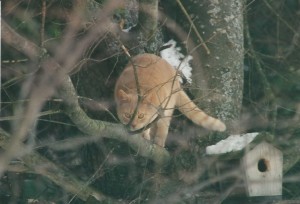 He was originally an outdoors cat….our cat Don Juan would not be kept indoors so we had a cat door at the time.  Once Don Juan passed on, and we had added our two girls, Katie and Samantha, they all became indoors cats.  Conrad adjusted well to that.  Occasionally he would escape but he hasn’t done that for quite some time now.  I think he feels safer indoors anyway.

Katie and Conrad were best friends.  They were often cuddled up on the bed together.  When Katie died last year, Conrad lost his sweetie.  He and Samantha don’t have the same bond that he had with Katie.  I think it was then that he started often mewling loudly early in the morning (he is the dog’s alarm clock).  I think he still misses her.  A few months ago, not long after Katie was gone, he stopped grooming himself very well 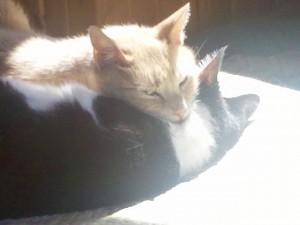 (Katie was often seen giving him a bath).  He doesn’t always use the litter box.  He lost some weight.  We took him to the vet, where they did numerous tests, but he was given a clean bill of health.  We are left to believe that it is just old age making him lazy.  But I wonder if grief over losing his Katie isn’t also a part of it.  But heck, maybe a lot of it is just old age.  I’m not even close to 72, and there are certainly days where I’d like to just lay around in a warm place, hiding away from the world, and only get up to eat! 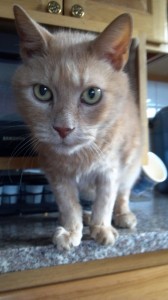 I always call Conrad my “golden boy with the golden eyes”.  He is a beautiful cat, and very photogenic!  Even now, when he is pretty scruffy looking, he still looks good in photos!  We try to brush and comb him, and I even try to wipe him down with a wet washcloth.  Unfortunately, he’s caught on to that, and doesn’t want anything to do with it.  He used to sleep on the bed at least some of the time, but now he is always on the satellite box where I can’t get to him so easily!  Smart old man.  But when he wants to eat, he will put up with more, so when he shows up to be fed, I’ll often make him let me comb him for a bit before I feed him.  He’ll put up with it then. 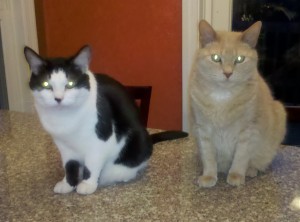