My dogs love to play fetch with the ball.  Three out of four of them anyway….our oldest beagle, Kobi, is not interested….he is strictly a couch potato now (though he loves his walks).  Strangely enough, the little beagle, Cricket, loves fetch as much as the golden retrievers.  In fact, she is much better at it than they are.  She knows what RETRIEVE means better than they do.  Their version of the game is more like “keep away”, and if Cricket is not in the mood to play, the game goes pretty slow.  Once in a while they will bring the ball back and leave it, but for the most part they want you to just try and get it from them.

Cricket gets far more exercise than they do when they play.  She does all the fetching.  They like to chase and catch the ball, but they let her do the running.  We have a fairly high deck, and we throw from there, and she will bring it back up all those stairs every time.  While she is doing that, Moses is usually finding a spot in the shade to lie down 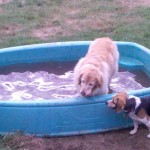 and wait.  If Sheba has caught the ball, she will run as far as the bottom of the stairs….chew the ball several times (I’ve never counted if there is a set amount!), and then drop it for Cricket to bring up onto the deck.  If Moses catches the ball, he almost immediately passes it off to Cricket…the ball never even hits the ground; it goes right from his mouth to hers!

Of course, our role in the game is to be the pitchers.  I have a “chuck-it” since my arm is not that good, plus I have to bend down less, and don’t have to touch that slimy, dirty ball.  My husband will sit out on the deck in the nice weather, and Cricket will come and deposit the ball right in his lap.  I don’t care for that routine….again; I don’t need that slimy, dirty ball in my lap!

In the summer, we have a kiddie pool for them to cool off in.  Even Cricket loves it….she will bring the ball in there with her, and keep it close while she stretches herself out in the water.  Surprisingly, Sheba and Moses will not do anything other than stand in the pool.  Yes, the dogs who have the webbed paws for swimming, won’t do any more 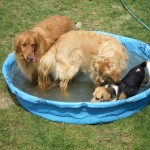 than get their feet wet!  (Sheba does love to swim in the lake though, but Moses won’t go in any further than when he can still feel ground under his feet.)

In the winter, the most fun is when there is a lot of snow on the ground.  Then we can throw the ball into the deep snow and watch them all push their noses, or whole heads, into the snow, searching for the ball.  They always find it!  We actually can’t play much if there is not snow on the ground.  The hard, frozen ground is not gentle on their landing in a jump, and they have hurt themselves in the past.  So now we only play if there is snow in the winter.  The only problem is if we get a fresh snow and it gets a little warmer out….then they all get covered with little snowballs, or sometimes big snowballs, and we have to bring them in the house and thaw them out every so often!

Occasionally we accidentally throw the ball out of the fenced in area (it bounces out).  This is call for great alarm on the dogs’ part.  They run up and down the fence in a panic.  Oh no, we cannot just grab another ball to play with (even though they have many), they have to have THAT ball.  So we go to the gate and open it, and Cricket goes running out along the fence and gets the ball.  Snarling and growling, trying to bark with a ball in her mouth, she runs back in through the gate, proudly showing off the ball that she recovered.  Now the game can resume!

I think they try to mess with each other’s minds sometimes.  Once in a while, Sheba will stubbornly hold on to the ball, and not pass it off.  Or she’ll stay up on the deck and try to take the ball whenever Cricket brings it up and drops it.  At times, Cricket will just cruise the yard or the deck, nose to the ground, with the ball in her mouth.  It is like she is tracking where the ball has been.  The others have to wait impatiently for the game to resume.  Often, my husband and I comment that we are not exactly sure what the rules of the game are.  I think they change them, or make them up as we go along (kind of like my family does when we play games at get-togethers!).  Another funny little quirk they have:  sometimes if Cricket catches the ball, she has to lord it over the other two by snarling and shaking her head at them, again, trying to bark a little with the ball in her mouth; she will do that to Sheba, and then Sheba will turn around and run at and bark at Moses!  It seems to be kind of a “pass it on” aspect to the game!

This is far more entertaining to us than watching sports on TV.  The only problem is that we usually get worn out much sooner than they do!  On the weekends, Cricket sometimes wants to start first thing in the morning.  We keep the balls up next to the TV in the kitchen, out of reach, and she will sit there staring up at the balls, whining…… she is obsessed and will not let up……”please, can we let the games begin?”