Our Golden Retriever Moses was born on October 25, 2004 in the same litter as our Sheba. The litter of 11 belonged to friends of ours, and before they were born, we had claimed the largest female, Sheba,  in the litter.  At this time we had our beagle Kobi at home, and our other beagle Cricket had come home with us two days after the Goldens were born.  We only wanted one more dog.  We visited the litter often, and on one visit when they were a few weeks old, one of the male puppies started following my husband around.  Our friend Kim insisted that this was a sign that he wanted to go home with us also.  They offered us a two-for-one deal, and the promise that two puppies wouldn’t be that much more work than one (not counting Cricket who was only two months older than them).  We of course got sucked in; it took us one evening to discuss it and make the decision to take the male also.  I wanted to name him Moses after the first dog I had fallen in love with, and that just made it seem completely right. 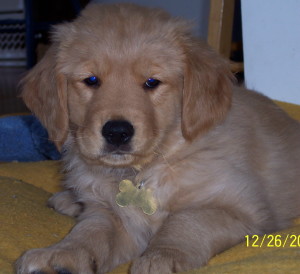 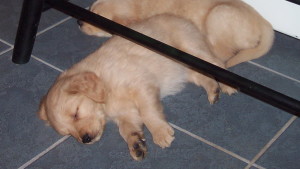 For the most part it was true that two wasn’t really much more work than one.  We were able to keep Sheba and Moses together in our large mud room when we were at work, so they had each other for company.  By the time they had come to their new home at Christmas, Cricket already had run of the house, and it was her job to keep Kobi company.  We also set it up so she could get into the mud room to play with the other two.  Other than the times when we were chasing around 3 out of control puppies, it was not bad.  I do remember, however, that there were times when I could get two of them to listen and be under control, but there was always one of the three that didn’t cooperate!  We survived the puppy days though, and as adult dogs, it really is not that much more work. 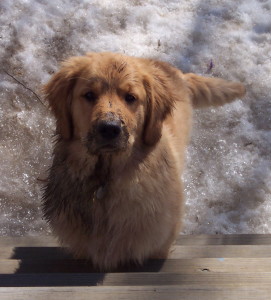 Moses is a big love.  He often forgets that he is not still that little puppy, and he will climb up on the couch or the bed and throw himself on top of one of us for attention.  When he decides he wants attention, he really demands it!  He expects constant petting….if you stop he gives you a (mostly) gentle swat to remind you to continue.  If you think he’s fallen asleep, and take a break, his eyes pop open and the paw comes out! 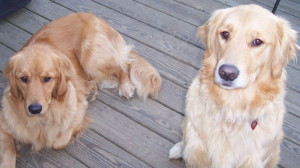 We have a set of four steps going up to our high bed, and every time he wants to get up there, he makes a project out of it.  It’s like every time he uses those stairs is the first time, and we have to coax and encourage him. That might lead you to believe he’s not all that smart….but on hot Summer days when the three dogs are out playing ball, he wisely waits for the throw in the shade under the trees somewhere, unless he is in the kiddie pool cooling off.  Moses loves to play ball, even if he lets his sisters do more of the work.  If he is lucky enough to actually catch the ball, then he always passes it off to one of the girls.  It’s cute to watch, they have a very good routine of passing it….the ball almost never hits the ground…it just goes from his mouth to theirs. 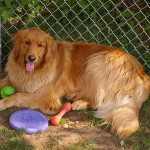 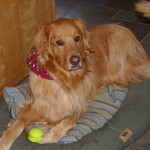 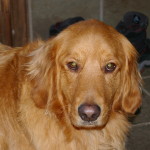 What is my favorite personality quirk of Moses’?  He will only drink fresh water.  I mean fresh, as in, he has to see you fill the bowl in the sink!  The bowls sit right outside the bathroom door, and he knows they get filled from the bathroom sink.  He is like Goldilocks….he will actually smell the water in the bowls (there are three), and if none of it is fresh enough for him, he will pace back and forth in and out of the bathroom until he gets a fresh bowl!  It has to be just right.  He knows how to get it, so again, he’s pretty smart.  I think he just likes to play the part of the big goofball!

His other quirk is that he is somewhat of a kleptomaniac.  He will steal hand towels off the towel rack, socks out of the laundry basket, and the roll of toilet paper off the holder.  We have to close our bathroom doors when we leave the house!  He has been known to steal the roll of toilet paper and leave no remnants of it behind.  Yep, cardboard and all eaten and completely gone!  Luckily he’s always seemed to digest it all fine, but we do our best to keep him away from these things, just in case.

We have been lucky so far that Moses has been mostly healthy.  He does suffer from seizures, but thankfully they are few and far between.  He might have one every few months or so.  They are scary when they happen, but thankfully so far he does not have any long lasting effects from them.  We just hold him close through them, and once he gets through it he is usually back to normal not long afterwards.  The first time he had one he had been outside playing ball.  He came up on the deck shaking, and then all of his muscles stiffened up.  We got him through it, and before long he was back to wanting to play ball again!  We hope it will always be this way for him, and that they won’t get worse.

Moses loves to play ball and he loves his stuffed toys, or the old hand towels we give him.  After supper he will run to get two or three toys and prance through the house with them, showing them off.  He loves to go in his kiddie pool in the Summer, and then go roll in the grass and dirt after getting out.  We take him to the lake sometimes, but he will not swim like his sister Sheba.  She will swim out to get the ball, but he will not go out over his head.  You can actually see him feeling his way through the water, and if he feels the lake bottom not there anymore, he turns around! 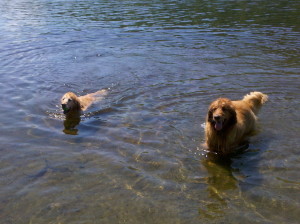 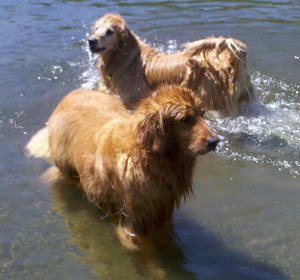 Most of the time we affectionately call him Mo, Mosies, Mr. Mo, or sometimes Mosie-Mo.  He’s a good boy and we love him so much, personality quirks and all!  As in my title, I also like to say “Moses, Moses….” to him when he is acting silly.  Does anyone know what movie that comes from?  It is one of my favorite old movies, and please let me know in the comments if you are familiar with it.  I will give out some hints if I have to.  Moses would like to give you one of his big slobbery kisses if you can guess! 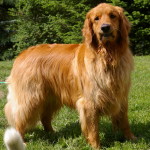 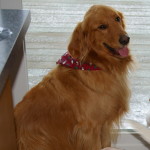 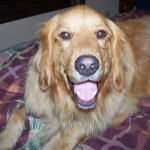