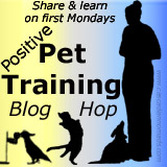 We’re excited to be joining the Positive Pet Training Blog Hop for the first time.  This hop is held the first Monday of every month, and is hosted by Cascadian Nomads, Tenacious Little Terrier, and Rubicon Days.  We hope to be joining in more from now on!

This month’s theme is “goals”.  Since we got a little waylaid in our training by Luke’s luxating patella and the holidays, I thought this would be a great time to sit down and think about where we’re at and where we want to go in the coming year.

Through the last couple of weeks of the holidays, we didn’t do any formal training.  I thought it was OK to take a break for a bit, but of course we still worked on basics in our everyday lives.  Since we had people over to the house at times, we got chances to work with Luke on not reacting to people.  It went good and bad, but overall I think he did as well as expected.

That is something we will definitely be working more on in the coming year.  We took a step back from our not so good first attempt (which you can read about in Part 4), went back to the beginning and mostly worked on trying to keep him calm when cars pull in the driveway.  Some times went better than others.  Once people are in the house, we have him go to his bed and stay there and he does very well with that (as long as the people don’t move around too much!).  I also plan to implement the “Nothing in Life is Free” concept with him to see if that helps.  It was suggested to us by a friend in the comments in Part 4 and I think it might work well with Luke (more on that in a future post).

Just this morning I decided to give Luke another try with the nose work, and having a session of just running him through the basics.  I have to say I was really excited about how well it went.  First of all, Luke was outside and I went downstairs and set up the boxes.  When I let him in the house, he went running downstairs, like he knew we were going to do something fun and he was so excited about it!

We moved on in the nose work to closing the boxes (first one flap, then two, then all of them).  He pretty well aced it.  This is something I definitely plan to continue with him.  When spring/summer comes and traveling is easier, I might even decide to take a formal class with him.  Either way, it is something we will continue to do for fun, because he obviously loves it and seems to be a natural so far. 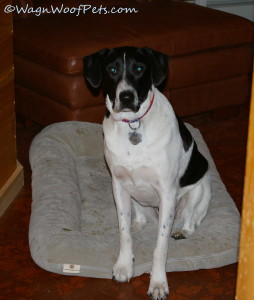 In between setting up the boxes I had him going to his bed and staying.  We ran through his basic “sit”, “lie down”, “stay” (and “release”), and “leave it” and he did wonderful with all of them.  It’s like we never took a break.  I plan to just continue with working on the basics daily in every day life, because he is still young and still needs work there.  I plan to just do a formal session of that occasionally to reinforce it.  We no longer use the clicker when doing these things either.  It was a tool to get him to learn things, and that tool worked very well for him.

One other thing I’d like to do is teach him some kind of trick just for fun.  I just don’t know what that trick will be yet.  I’ve wanted to have him “give paw” or “shake” but he doesn’t really like having his paws handled so I’m not sure if that one will work for him.  If you have any suggestions, please leave it in the comments.  There may be something I just haven’t thought of yet that would be fun for us.

We also continue to work on loose leash walking and he’s doing well with that.  The weather has made it difficult to get outside as much as we’d like but we’ll just get out when we can.

Throughout all my work with Luke, I haven’t forgotten about the girls!  Neither of them have responded as well to the clicker training.  Cricket just stands there and wiggles, wondering why she just doesn’t get treats just for being cute.  Sheba does OK, but she’s much slower than Luke….she wants to please but she’s just not quite as smart as Luke (I don’t intend to be mean saying that….we love our golden girl, we’re just realistic about her blondeness).  So I slacked off with them, but I plan to go back to the beginning and try one more time with them, and then I want to try the nose work with them as well.  Cricket may be a matter of just using treats without the clicker and luring her to do what I want.  She learned the stairs up to the couch very quickly that way.  With Sheba, I probably just need to be more patient, and maybe keep sessions just a bit shorter.

I’m excited about working on these things in the year to come, and I’ll get back on track writing this series as well.  Luke is the first dog we’ve done any formal training with, and I can see how much it has increased our bond with him.  Having a well behaved and obedient dog is not the only benefit to training!