Our current crew consists of four dogs and two cats.  Not so long ago it was four and four.  It was never our intention to have that many pets at one time.  Somehow whenever we went to get one dog or one cat we ended up getting two. 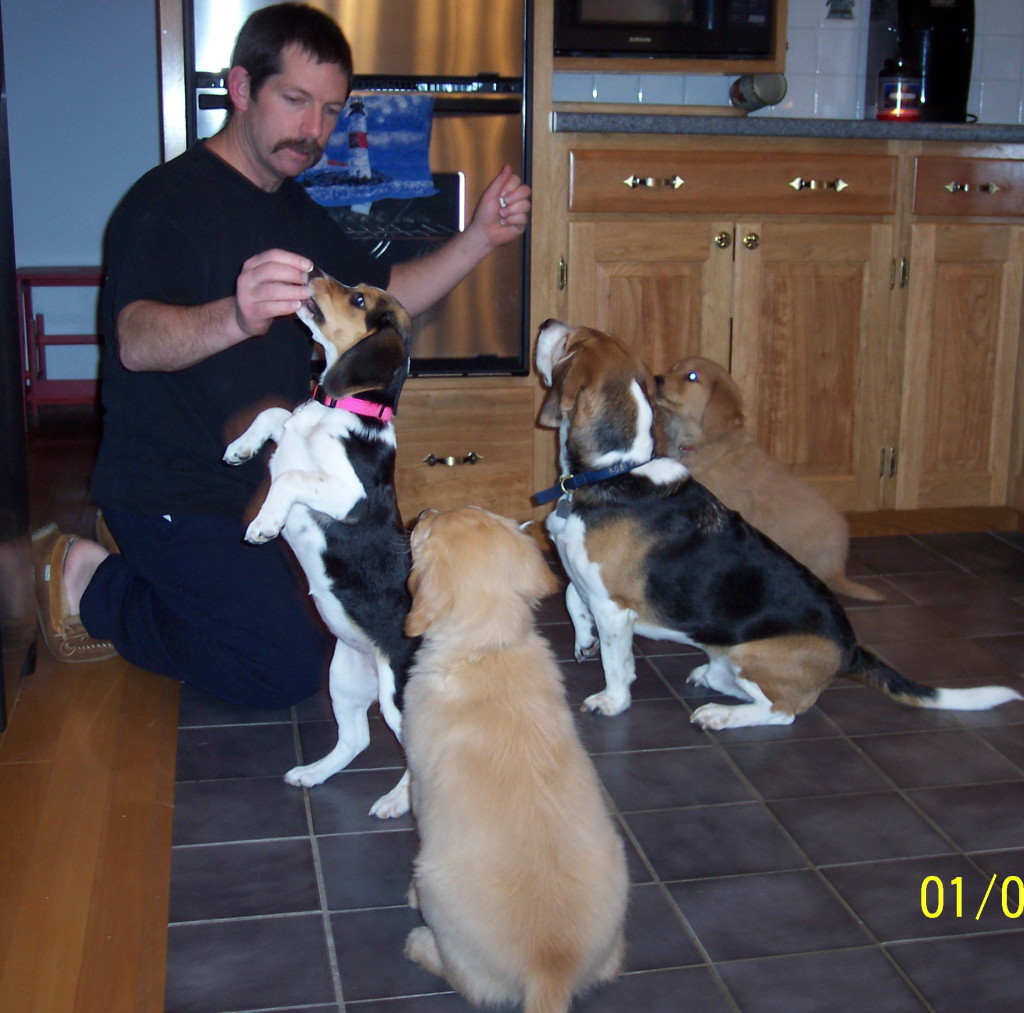 Let’s start with the obvious challenge of having six pets:  the expense.  That’s a lot of dog and cat food, even though we buy in bulk, of course.  We average one 35 pound bag of dog food every 3 weeks or so, and a 16 pound bag of cat food every 6 weeks or so.  We buy our food from our vet’s office, it’s probably average to a bit higher in price, but I would never buy supermarket or big box store cheap food.  We live in a rural area, and our vet’s office is actually the most convenient and closest to us.  Then of course there are treats for the dogs, and canned food for the cats (Samantha gets a pill every other day that gets added to ½ can of food).  Not to mention toys, dog and cat beds, and medical as well as grooming supplies. 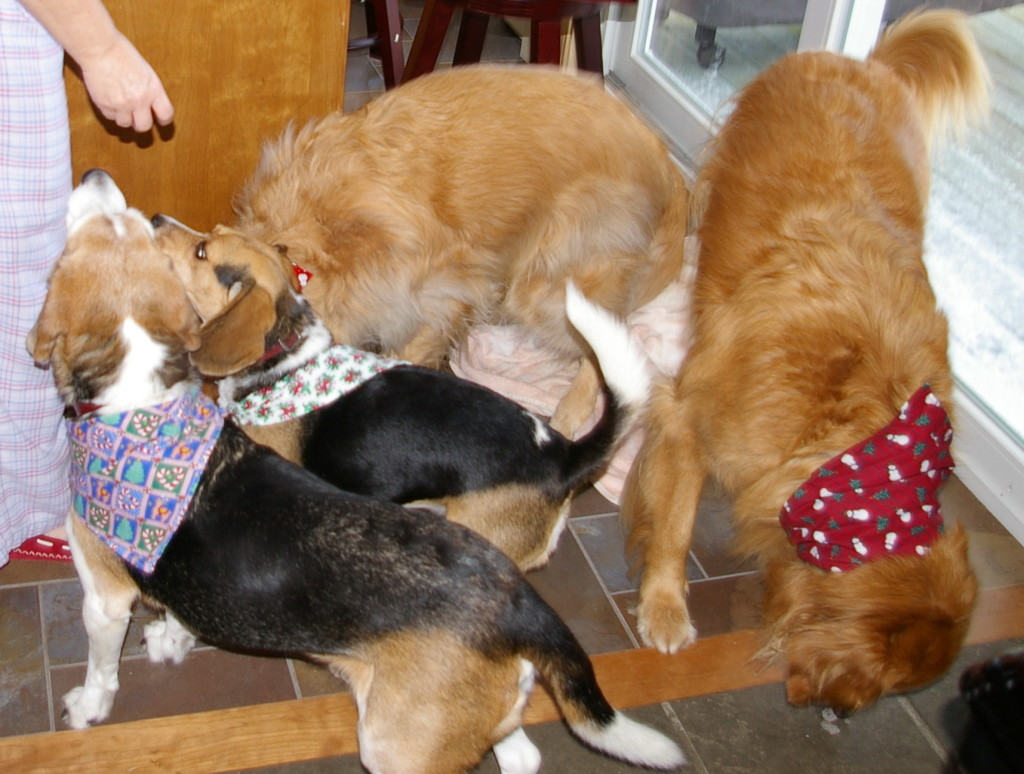 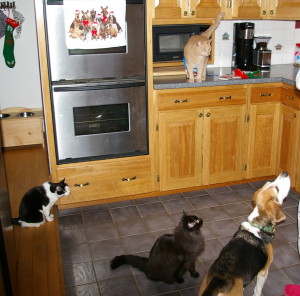 The biggest expense is the veterinary bills.  Our cats are indoor cats so we save on vaccinations there, since indoor cats don’t need to get all the ones that outdoor cats do.  When they were younger we only took them for a checkup very 3 years when they needed shots.  Now that they are older (10 and 14) we will take them annually for their check-ups.  Luckily for us (knock wood) our pets have been mostly healthy.  There have been some issues where we had to pay for a lot of tests, but in the end nothing serious was found wrong.  One of my sisters often asks me how we do it, paying for all the vet bills.  My answer was simply the truth:  we don’t think about it, we just pay it.  If we couldn’t afford to have and care for 6 pets, then we shouldn’t have 6 pets.  So we just do what needs to be done and try not to worry about it.  We are by no means rich, but we are comfortable enough, and I don’t even have to work full time.

When the dogs were puppies, and 3 of them were puppies at the same time, it was more difficult to handle them.  But now that they are older, it really is not that much more work.  Sure, some days they wear us out going in and out of the house.  Sometimes we lose track of who is in and who is out!  Our large fenced in yard makes that easier too though….we don’t have to walk them to “do their business”.  Some day we may put in a dog door, when the day comes that maybe we no longer have indoor cats that we would have to worry about escaping. 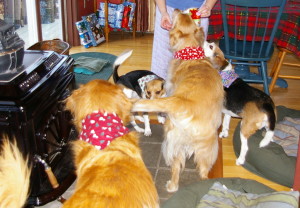 I’d say the biggest difficulty with multiple dogs is training.  It’s hard to find the time to train that many dogs, when for the most part any serious training has to be done individually.  It’s really the time factor.  So our dogs are not the most well behaved or well trained dogs, they don’t do a lot of tricks, but overall I think they behave pretty well.  Sheba has learned not to jump on company, which had been one of our biggest challenges.  They know “stay” and “come” and for the most part they all listen very well.

There have also been issues with fighting.  When we had only two dogs, one male and one female, that was never an issue for us.  But four dogs have had their problems.  They don’t always accept one dog as the “alpha dog”, even though you can see a little bit of a chain of command going on at times.  I wrote more about the fight issues in my post “Sibling Rivalry – or Something Else?”.  I think the dogs are mellowing out a bit as they get older, and we have learned better how to deal with, and prevent, fights from breaking out now.  We have mostly identified and eliminated the situations that cause problems. 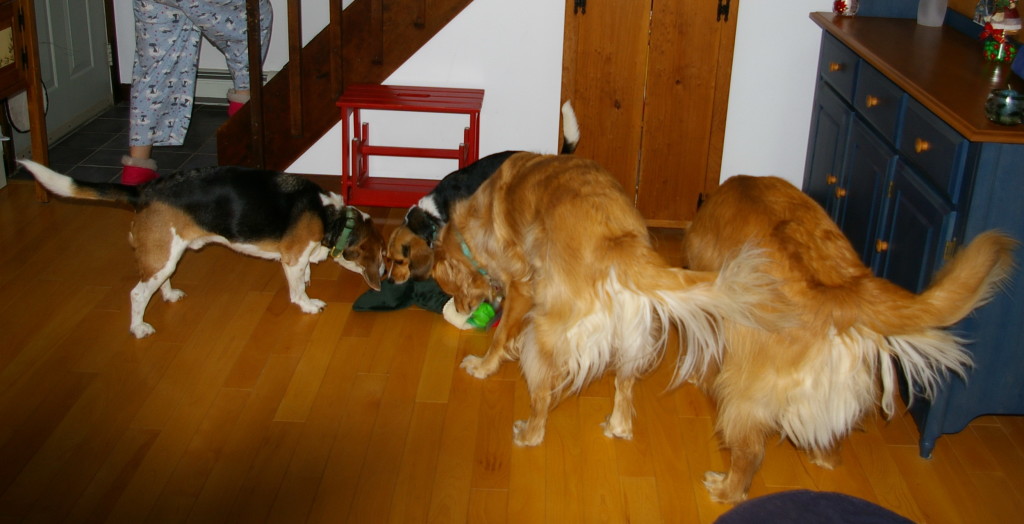 Another big challenge is grooming, with the time factor again being an issue.  There are four sets of nails to clip, four sets of ears to clean, and two Golden Retrievers who should be brushed way more often than they are (they say daily….I wish).  Not to mention one long haired cat to brush, and one old, lazy cat who no longer wants to groom himself, so also needs brushing.  I would also love to keep the Goldens better trimmed.  Both Sheba and Moses are rather high strung, nervous dogs, and I wish now that I had taken them to a groomer when they were younger so they had learned to be comfortable at one.  Silly me thought I could do it all myself, but I don’t; but I also don’t want to put them through the stress of visiting a groomer now at their age.  So they are not the most beautiful Goldens out there, and sometimes they have uneven coats where I’ve had to cut out mats….but since we are mostly homebodies anyway, they don’t get seen that much!

I’m going to be honest here:  not that I want to think about it too much, but in the future we won’t have four dogs again.  We haven’t really decided what the right number would be, but probably two.  We had decided on three after losing our dog Maggie.  Kobi was devastated when we lost her, and we could not leave him home alone.  We found solutions and worked through that until Cricket came along, but we really felt that if we had three dogs, and lost one, that at least there would still be companionship for the ones left behind.  However, I kind of miss the days of having only two dogs, when I could comfortably take them all with me, for drives or walks, camping and hiking.  Now it’s difficult to pick and choose who to take, and who gets left behind.  I have even taken two dogs off to walk with my sister, and left two at home with the hubby; only to come home and find out that Moses was upset and wouldn’t settle down the whole time I was gone.

I would even consider going back to just one dog if hubby or I were retired and the sole dog didn’t ever have to be left home alone.  When we had just Shelby and then just Maggie for a while (and cats), they were fine home alone, but I still feel better (uh, less guilty) knowing they have some company if we need to go places without them.

Oh, and two things we won’t even bother to talk about?  The fur factor, and the dirt factor.  I’ll leave that to your imagination!  I’ll just say this:  from someone who used to be an obsessive compulsive housekeeper, you’d be surprised what you can learn to live with! 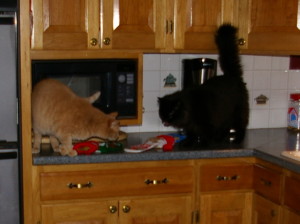 Cats are a bit different than dogs, and other than the expense, I would say one or four, what difference does it make?  My hubby might disagree, however, since he’s the one that takes care of the litter boxes.  If you have two cats, you need three boxes, or so they say.   We have three and Conrad still chooses not to use them all the time.  Also, we have weight issues from time to time.  It’s hard to be sure that your indoor kitty gets exercise, especially when you also have dogs that would cheerfully eat any little cat toys left lying around.  So I take that back.  Now I have been trying to add cat play time to my days also, and I’m not doing very well at it.

The bottom line here is this:  we wouldn’t have it any other way, because we love all of our pets immensely.  We don’t want to think too much about the day when we’ll have less because we don’t want to lose any one of them.  We know that day will be here, hopefully in the very far future; but sometimes we still think about what we will do when the time does come.  This works for us now, because this is the situation we ended up in and we make it work.  There are days when it’s overwhelming trying to keep up with it all.  We take the bad with the good, because there is far more good.  All the dogs have different personalities and entertain us in their own ways.  Some are more affectionate than others, and some spend time lying at my feet when the others would rather be outdoors.  One cat loves to be held and cuddled, the other doesn’t want to be picked up, but likes to just lie next to you and get petted endlessly. 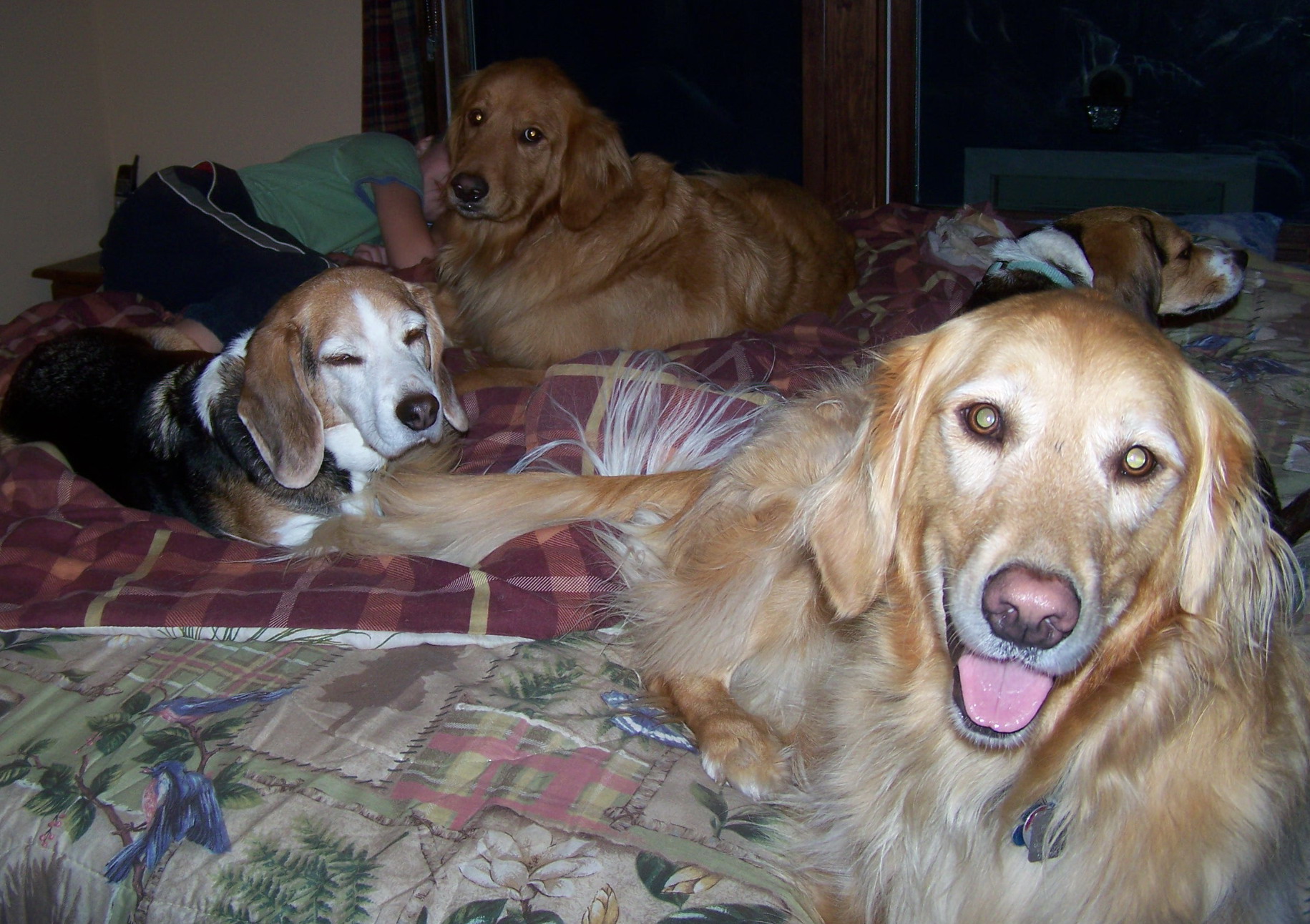 Mostly, there is nothing like the love of a pet and the more you have the more love you get!  All that love more than makes up for the other minor inconveniences, and I think that holds true no matter how many pets you have.

How many pets do you have, and how does it work for you?  Do you wish you had more or less, or do you just go with the flow like we do?