Do you have a picky cat? Is that politically correct – or should it be “finicky”? What if you’re a pet blogger who wants to include some cat treat and food reviews on your mostly dog blog, so your cat doesn’t feel left out? We were recently faced with this dilemma and wanted to share the solution we came up with. Our cat Samantha doesn’t get as much blog time around here, so we try to give her some chances to do reviews; but our picky girl doesn’t make it easy.

Cricket would like to tell the story of our recent attempt to do a cat food review for Chewy.com. 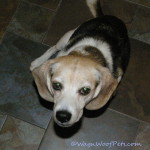 Cricket: First of all, we don’t know why the Momz didn’t just get some yummy dog treats from Chewy for us dogs to try! We’ve never given a bad review, because we pretty much like everything!

(Interjection by The Momz: That’s not exactly a glowing reference for the food and treats you have reviewed, you know! I guess that’s why I select what we try or don’t try, because I can at least report on the quality as well as the fact that you guys liked something.) 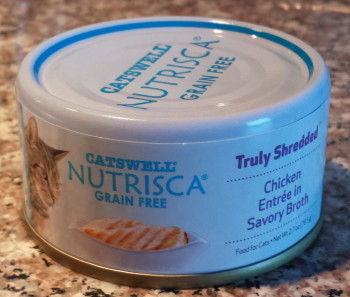 Cricket: Well, yes, and I suppose that’s part of the reason you wanted Samantha to try this new cat food, Nutrisca; it sounds very healthy and high quality. The Momz is not very happy that Sam’s favorite food is from a brand she doesn’t exactly love. So she keeps trying to get Sam to try other foods, but Sam doesn’t make it easy.

So when we got this Nutrisca food to try, the Momz was not pleased when all Sam would do is lick the gravy out of it, and didn’t eat much of it. I mean, look at this food! Real shredded chicken in a savory broth!

Nutrisca cat food is made by Catswell. It is grain free with added vitamins, minerals and taurine. There is no corn, wheat, or soy, and no artificial colors, flavors or preservatives. All that is apparently not good enough for our Samantha, however! 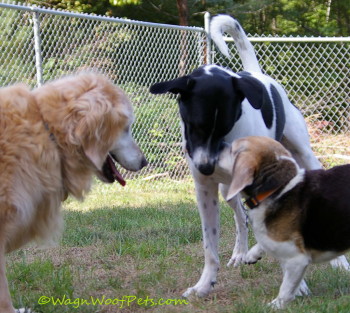 Therefore, the Wag ‘n Woof crew had to decide what we were going to do about this. We couldn’t put out a bad review, when we know that Sam is just ridiculously picky (er – finicky)!

Sheba, Luke and I put our heads together and came up with a solution:

The Momz vetoed the idea of the K-9 crew doing the review (though we’re happy to…we love cat food), but we came up with another idea. We decided to outsource the job to our cousin Nina. Nina belongs to our aunt and pet sitter Auntie Lynn. She first made an appearance on the blog for International Box Day so we knew she was up for the job – no further interview required. She even got some toys from the BlogPaws swag bag because Momz knew Sam wouldn’t play with them.

Nina was glad to accept this job, and her Mom was happy to have Nina finally contributing something to the household! Miss Nina put together some photos for us, and she gave the Nutrisca food all paws up! She even knew how to display the food alongside her for the photos (well, her Mom might have helped her with that).

Nina says you should go ahead and visit Chewy.com and get some Nutrisca food for your cat. Chewy has super speedy shipping, reasonable prices, and exceptional customer service! Now is a great time to buy because Nutrisca is on sale for over $9.00 off per case!

We still had one more thing to settle though: Momz said that we could not completely fire Sam off the crew. She has done some successful toy reviews (even though she loses interest in her toys quickly, she likes them at first and poses for the photos with them, and Momz showed us this evidence of that: “Life with Multiple Pets”, where Sam played with some K9Bytes toys, and “The Short and Long Life of Toys“, where she plays with her West Paw caterpillar.).

Fine, we’ll keep her on staff for some toy reviews, and maybe some other stuff. But I have to tell you, Sam wasn’t too broken up about her firing. When we went to tell her, this is what we saw.

Even we had to admit that there is one thing she’s an expert at: relaxing (more like she’s lazy!!). Here she’s seen on a new bed that the Momz bought her, and she’s actually been using for several weeks now! Finally, Momz spent some money on her and it was appreciated! Even though we’re not sure she deserves it, Sam has been promoted to “Chief Cat Bed Reviewer”. Humph, it’s not exactly a democracy around here.

We’ll probably keep trying new foods with Sam, because the Momz doesn’t give up. But we’re sure glad we have Nina on staff now, because we pretty much know how any future attempts are going to go. The Momz might as well accept the fact that Sam just wants to eat what she wants to eat, and of course she is willing to put her principals aside to keep Sam happy and healthy! 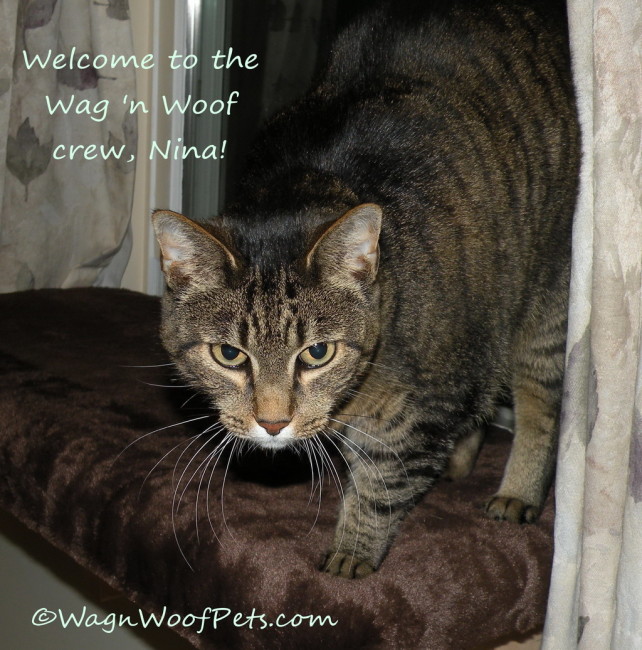 *Disclaimer: We received a free case of Nutrisca cat food to review from chewy.com, but were in no other way compensated for this post. All opinions are our own.

One more thing! We are excited to be co-hosting Walk Your Dog Week this year with our friends from Cascadian Nomads and Dolly the Doxie.
Stay tuned for details coming this weekend and get ready to start walking! 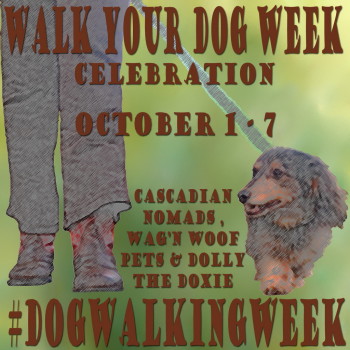