After several days of double digit below zero wind chills and another big snow/ice storm (not as big as they originally predicted but big enough), it was not just the chickens and guinea hens who were relieved to finally get out of their confines!

Although we try to get out as much as possible in the winter, we do have our limits of what kind of weather we’ll go out in. We had to break out all the indoor games for Luke, but it’s just not the same as getting out in that fresh air.  It was a huge relief when on Wednesday the temperatures finally got back into the tolerable zone. They’re now actually going further in the other direction than they need to…but we’ve learned that Mother Nature is all about extremes, that’s for sure.

As soon as the thermometer hit 20 degrees, Luke and I headed out for our walk. The birds were let out of the coop by then, but not completely out yet. As you can see in the below photo, they weren’t too interested in walking in the snow that had piled up in their run, so later I would let them out of the run too. (I have tendonitis in my dominant shoulder and shoveling aggravates it, otherwise I would have shoveled them more space).

The Dadz had put some straw down outside for them the day before, and that’s where they all wanted to stand! They had gotten out the previous day, even though it was still only about 15 degrees and windy. The guineas ventured up high into the sunshine at first, but mostly everyone stayed in the garage and barn. It was still so cold I was only willing to take pictures of them from through the window!

The next day they could venture further once I could keep an eye on them. Luke and I had planned a nice, long walk, but the snow was DEEP out there, and even with my snowshoes on it was hard going for me. Luke did something he rarely does too, he dropped back behind me to follow in my tracks (we lost all  our old tracks and trails due to the additional snow)! Then at one point he just stopped and wouldn’t go any further. We turned around and followed our previous trail and he was happy with that. 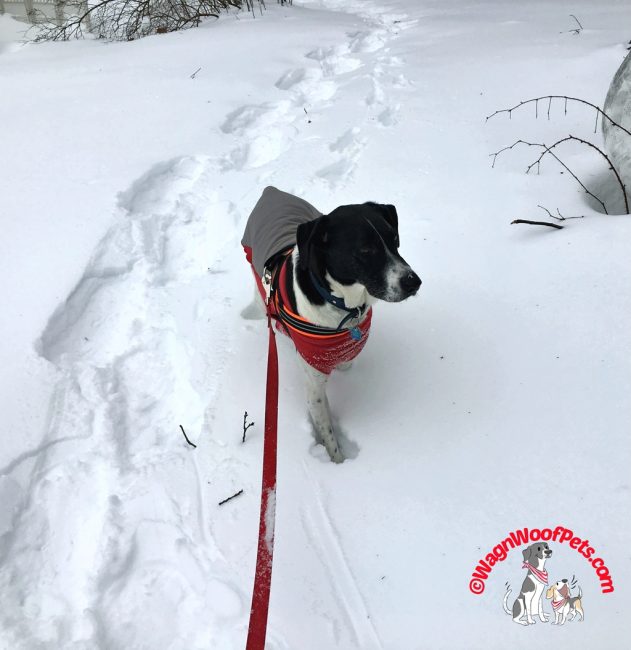 In previous winters, I’d always gone out ahead and blazed snowshoe trails for the dogs. Our little beagle Cricket had arthritis, so I had to make it easier for her. I thought Luke could handle some trail blazing with me, but I think he got tired, and his paws and legs probably still got cold as well. With two days of rain coming up (crazy, right??), I’m going to hold off making new trails until we see how things settle. It may be easier after the rain. Either way, Luke and I still got a good walk in – I was tired afterwards anyway! I brought him back to the house and was going to make some more trails, but I just didn’t have the energy (darn that I’m not as young as I used to be).

Hopefully the upcoming rain doesn’t land us back inside again. Now that we have farm birds, we seem to understand the origins of the expression of being “cooped up” just a bit more. While it’s better for the birds to have a smaller space so they stay warmer in the winter, I imagine it feels really small when they’re stuck in there all day for several days in a row. We all are learning to appreciate our freedom lately!

50% off your first delivery through our affiliate link!

Thank you to our friends at Brian’s Home for hosting the Thankful Thursday blog hop. Please visit other blogs through the links below.