It never occurred to me, before we ended up with four dogs in our household, that fighting could be a problem.  Our first dog was an “only dog” and the next one was also, until we added a second dog, which hadn’t been in the plans.  But we never had problems with Kobi, our beagle, and Maggie, a retriever mix, other than the first night Kobi joined us, and Maggie realized he wasn’t leaving.  She was a little jealous that night, gave Kobi a snarl, but never again after that.  They were best buddies.

It was never our intention to have four dogs.  When we lost Maggie, Kobi was devastated, so we got another beagle ASAP for him.  But I wanted another big dog also, and friends of ours were going to be having golden retriever puppies.  So we signed up to get ONE of them.  Cricket, the beagle, came home about the time the golden retriever puppies were born.  When we went to pick out a female golden, one of the male puppi 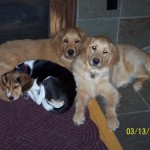 es insisted on following my husband around.  Yes, we got suckered into taking that one also.  How could four dogs be that much more difficult than three?  Actually, it did make the breaking in period easier.  We could leave the two golden puppies in a small room and they had each other for company while they were being housebroken.  The beagles kept each other company in the rest of the house (Cricket could join the goldens by climbing the gate when she got bigger).

All was peaceful until a few years in when the two males, beagle and golden, got into a fight over a peanut butter stuffed kong.  We would always give them each a kong when we left for work.  That day, before I could get out the door, Moses decided he wanted Kobi’s kong also, and a fight ensued.  I was able to break it up, and no blood was shed, thank goodness.  So no more kongs.  The next fight, some time later, was again between the two boys…we don’t know what happened as they were outside at the time, but we suspect it was over a treat that got taken out there.  My husband was able to break them up, but this time Kobi had to take a trip to the vet….nothing serious, but a bleeding ear, and puncture wound in his neck.  He recovered quickly.  So, now, no more treats get taken outside….when they get a treat, they eat them in the house in their separate spaces.

The two girls have always been jealous of each other, and snarly from time to time.  A couple of times I have had to pull Cricket off of Sheba…..Cricket tries to make up for her size with a big attitude.  They mostly fight over balls brought into the house.  OK, no more balls in the house.  When they come in, they get put up.  They used to play with a bone shaped toy outside also….until they fought over it one day to the point where Sheba had one end, Cricket had the other, and Sheba was whipping Cricket around, with neither one letting go!  Beagles can be quite stubborn and persistent!

The last fight was again over a toy, in the house, but this time it was between Cricket and Moses.  But I got the worse end of this one.  I reached in to take the toy, thinking I was getting it in time to stop a fight from happening; but I was too late.  My wrist ended 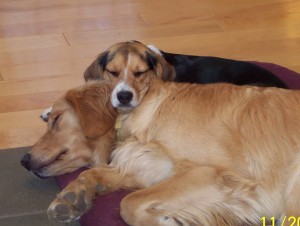 up in Cricket’s mouth.  She didn’t intend to bite me, she was after Moses.  I’m guessing that my yell is what broke that one up.  Luckily for me, Cricket’s teeth are kind of worn down from chewing on toys, so she barely broke the skin.  But the bruising was extensive, wow, that little dog has some strong jaws.  I had bumpy hematomas under my skin, and this was very sore and took a while to heal completely.  This one led me to the Internet for help.  This needed to stop.  The solution I came up with was banging two cookie sheets together.  If they even start to get snarly with each other, those pans come out.  They don’t like the noise, and immediately cower down and go to their corners. 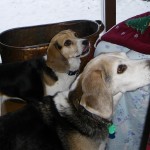 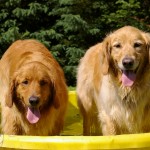 Of course, I don’t really believe this!  I think it is more because the beagles bonded before the goldens joined the family, and of course the goldens are bonded because they are siblings.  But it was funny to consider.  And don’t get me wrong; these fights are few and far between and for the most part these dogs are snuggled up sleeping with each other, or out playing a game of ball together.  They truly love each other…..they are just like human siblings and they have their moments. As parents of “furry kids”, we have had to live and learn; changing the rules and regulations as we go along, to try to keep a peaceful, happy household.  Hopefully we’ve finally got it all figured out!  So far, so good. 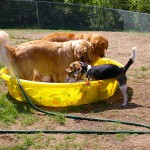 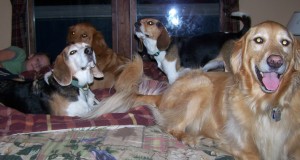