Those dog boots I wrote about last month, in our post “High-Steppin’ Beagle“, were made for walking….but for running in the snow, not so much.

I got the Ultra Paws dog boots for Cricket because she needs help with traction due to her arthritic bad knees. I was happy with them at the time, but I wanted to give you an update, since they didn’t turn out to be all I had hoped and needed for her.

I wasn’t compensated for sharing about them, but I still want to be clear that I believe these are still a good quality product. They just didn’t work out for Cricket running in the ice and snow; they started to shred. When I first wrote about them we hadn’t tried them in those conditions; and I still believe they’ll be good in other seasons.

I also believe they can be great for walking dogs in all weather. The features I loved still hold true; they are easy to put on and take off, they stay on, and they help with traction. They kept her paws dry; only the outer material ripped, the inner stayed intact. One thing you must understand, if you haven’t heard me say it before, is that when Cricket plays, she plays HARD.

With the throw rugs we’ve put around the house, Cricket has been getting around pretty well indoors so we haven’t kept boots on her inside recently. Initially she did keep them on, but once they started getting covered in snow and wet, I took them off when we came indoors. She seemed to be doing well without them, so I decided to pass on the drama of putting on a dry pair. Once she has the boots on, she’s fine – but the process of putting them on, and even taking them off, is what she has an issue with. 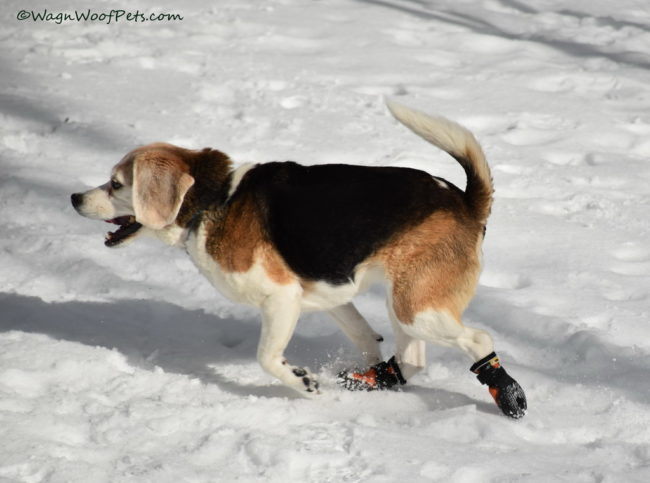 Not only does Cricket go full speed, non-stop, when she’s playing ball (and trust me, it’s a sight to see – an arthritic old dog playing ball with all she’s got!), but when she is doing that her back paws turn over (which you can see in both above photos). That is what the Ultra Paws couldn’t handle – the constant scraping of the toes. They just weren’t made for that kind of abuse.

I also want to give full credit to the company we purchased them from through amazon, MMP Living. They said they were good for all weather, and I wrote the company to tell them what happened. They immediately replaced the boots; no more questions asked. I used the new ones for as long as they would last, but saved one pair for use in the spring. But now I needed something that would work for her in the winter. The research began again. 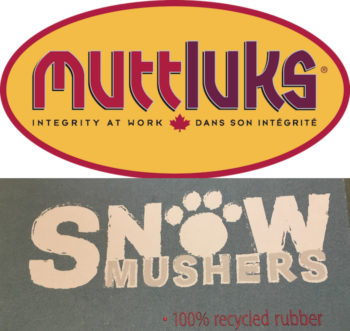 I settled on MuttLuks, a brand I had heard of before. I first read about them in the book “Following Atticus”.  Atticus was a hiking dog, and he is even wearing those boots on the cover of the book. They have a variety of boots to choose from, I’m not sure which Atticus wore, but I decided that their Snow Mushers would probably be the best fit for Cricket.

Again, they had the features I needed: easy to put on (even easier than the Ultra Paws as it turns out) with rugged rubber soles that go up over the front to hopefully hold up to the abuse Cricket would put them through. I followed their instructions for sizing and these boots fit perfectly; and they stay on.

They went through a trial run this weekend and so far, so good. Now, I can’t lie: these boots are not inexpensive. However, I did some shopping around and found a pair on a website called Baxter Boo at a clearance price that was almost half of the suggested retail on the company’s website. (I could not find a good deal on amazon.) If these do not hold up in the long run, I will let you know; but I think and hope they will.

Perhaps it’s not the best thing in the world to let Cricket run around outside in the snow, considering her arthritic knees. Please understand that she will often stop when she is tired (something she never did when she was younger); and that we do limit her time playing. Most importantly, Cricket lives (not just loves, but lives) to play ball; that is what makes her happiest, so we want to do everything we can to keep her playing for as long as possible. A few months ago, we thought her ball playing days were over, and that made us so sad. But we still left it completely up to her if she wanted to start playing again. All we do is provide her with the tools she needs to live the life she wants.