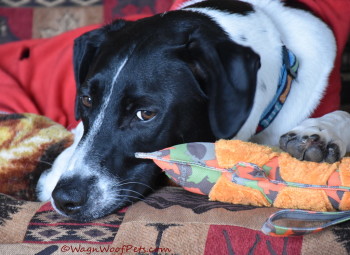 I shared this photo of Luke on Monday, showing him with his new “friend” who is the Tiger toy from Major Dog.  In the past, we’ve done most of our training with clickers and food treats (and always praise), but food is not the only reward that works, even with Luke who is very food motivated.

In fact, food wasn’t helping so much when it came to trying to train him to use his crate again. The clicker and food got him started with getting closer to the crate, but we just weren’t making much progress with getting him inside.

I had gotten in the habit of putting toys in there with the hopes that he’d go in after them, but the only time he did was when Sheba went to try and get a toy; and he went right in alongside her! I came to realize that since his reluctance is motivated by fear, he really was better about going in the crate when he wasn’t really thinking about it too much.

So when we got this new Major Dog Tiger toy to review, I decided that might be a good way to help him. He was quite excited about this new toy, and as I put it in the crate, he would reach in to take it, and then his reward would be a little bit of play with it. Then I would take it back and put it just a little further back each time, until we got it all the way in the back as seen below. We do this most evenings, just as part of his play time, or at other times when he wants to play with toys. 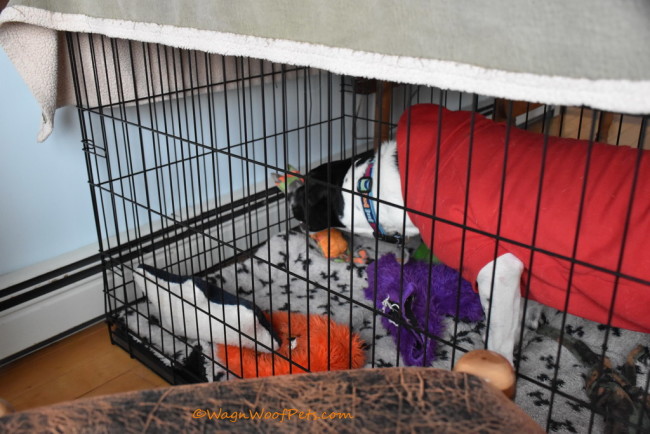 Helping Luke with his training isn’t the only thing I love about this toy. Not only is it tough, and will hopefully hold up better to our destructive chewers Luke and Sheba, but it does not have any squeakers in it. I had been on the hunt for a squeaker-less stuffed toy for what seemed like forever. Since both dogs are so destructive, and tend to eat things they shouldn’t, I always had the worry that one of them would consume a squeaker. That has led to emergency surgery for some dogs since a squeaker can lodge in and block their intestines.

Not only those things, but Major Dog’s toys are made in Sonneberg, Germany, the toy capital of Europe. All of their dog toys are developed through efforts of dog trainers and owners. They are tested and TÜV certified for safety. That means they go through the same contaminant testing as child toys. They do not contain cadmium, phthalates, PAH, tinorganic compounds, or azocolorants. I don’t know what all those things are, but they sure don’t sound good!

We don’t leave our destructo-dogs alone with new toys, but it’s good to know that if they did ingest a small portion of something I can feel safe that it’s not toxic. So far Tiger is holding up to them, even Sheba who seeks out the first vulnerability she can find in a toy, which in Tiger’s case would be his ears and tail! We’ll keep you posted on how Tiger holds up in the long run.

Because our yard has turned into an icy mess, we haven’t been able to take Tiger outside yet. He has that fun tail for playing tug and for easy throwing. I hope that once we can get him outside, he can help with training Luke to retrieve as well! Luke loves to chase things, but he doesn’t always want to bring them back, so that is something we are always working on as well.

Now, I have to be totally honest and say that we use other toys when training for the crate too. I find that mixing up and rotating toys is just as important as mixing up treats when it comes to training, in order to keep Luke’s interest. But so far I’ve only found 2 or 3 others besides the Tiger that Luke is willing to go all the way to the back of the crate for!

Luke and I are also still working on a couple of fun tricks that I hope to be able to share with you for next month’s hop. I will also hope to share that he has gotten all the way in his crate (so far only the front 2 paws have made it – he is very good at stretching), and if that happens we will have to give his new friend just a little bit of the credit for at least helping us along the way!

Disclaimer: We received a Major Dog Tiger toy at no cost in exchange for our fair and honest review, but were in no other way compensated. Wag ‘n Woof Pets only shares products we feel will be of interest to our readers, and all opinions are our own.