I was not looking forward to our first snow this year. Not because I don’t like snow; I hate driving in it but I love walking in it, especially when there is enough to use snowshoes. I also loved to go outside and play ball with the dogs in it. However, I don’t have a ball playing dog anymore (Luke will chase a ball about once and then run away with it to chew on it), and I knew this year’s first snow was just going to remind me of how much I miss our beagle Cricket. Cricket loved the snow, and fresh snow on the ground often made her act just like a puppy. Playing ball in the snow was so much fun for all of us. Luke likes the snow, but I think his excitement for it was more about playing with his sisters.

Our first snow this year, last Tuesday, wasn’t a huge storm. We woke up to a couple of inches, but it was already turning to rain by the time I got up. It was cold, wet, and raw, so we didn’t even go for a walk that day. We are expecting another, bigger, storm today, so we should be able to get out in it, and I’ll see how Luke does. Maybe he’ll want to chase the ball in the snow, but without his sister to compete with, I’ll be surprised. I miss both of our girls so much and I thought it would be fun to look back on first snows from previous years. Almost every year since I started this blog, I wrote a post about our first snow. It was interesting to see the dates that it fell year to year. We’ll start furthest back and work up to the present.

While I didn’t write about our first snow that year, I did post an old photo of that current crew from the past in the snow. We were still waiting for snow then. I don’t remember when the first one came, but I had hand surgery that December so we probably didn’t get to play in the first one. I’m sure the Dadz covered for me though. 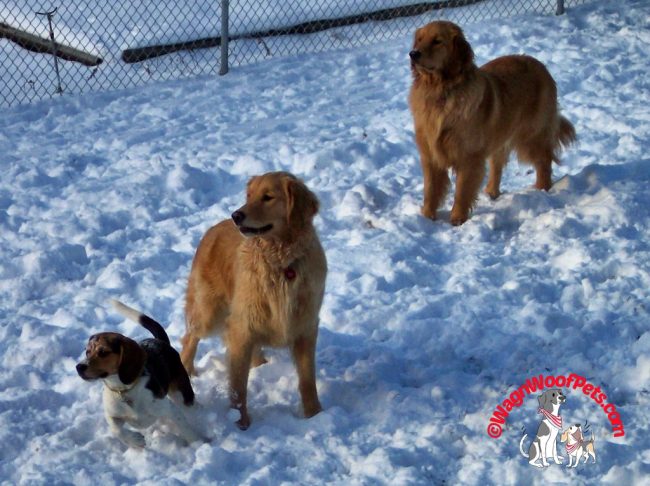 We had lost Moses that previous summer so it was just the two girls playing in the snow. That day they were up early, so I was throwing the ball and taking photos from up on our deck. We did have our beagle Kobi then too, but Kobi had no interest in playing ball! I’m sure he was cozy in front of the wood stove.

The first snow that year had come on Thanksgiving Eve. Luke was almost a year old by then and keeping up with his sisters playing. However, that next day was the first time his knee popped out from his luxating patella, and he couldn’t play in the snow for most of the month of December! 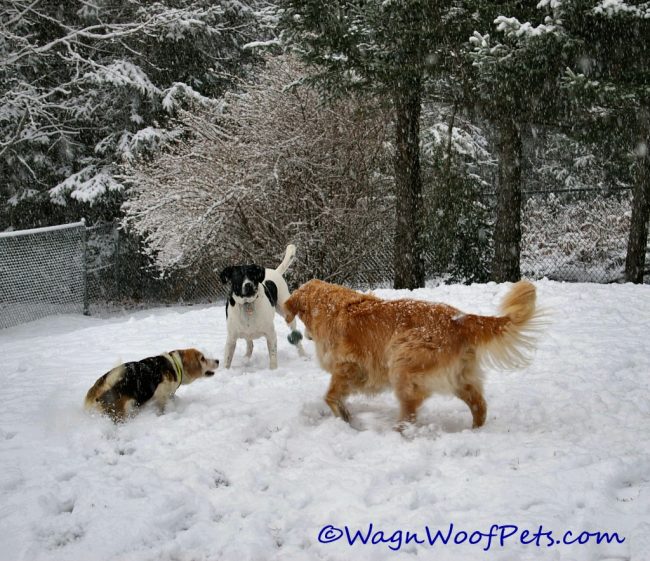 The first snow came late that year! Even at 11 years old, Cricket was quite excited and insisted on playing first thing that morning. It was quite cold out though and they didn’t last long, though I’m sure we played again later. 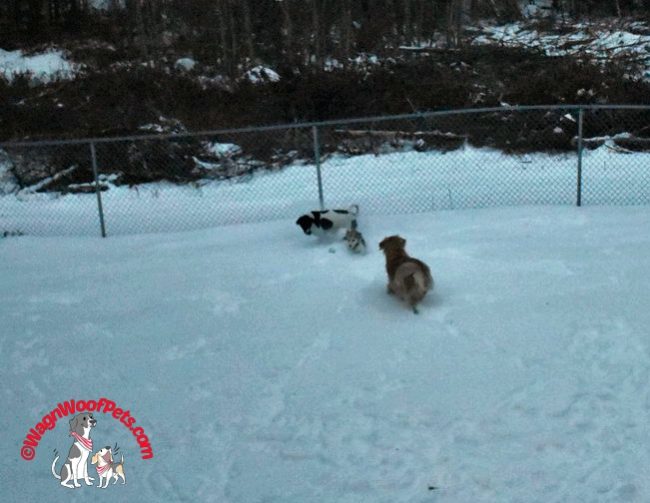 Cricket had been diagnosed with arthritis by that year, and I lamented that she was not excited about the first snow, and didn’t want to play. However, Luke and Sheba filled in for her and I got some fun video and photos of them playing. 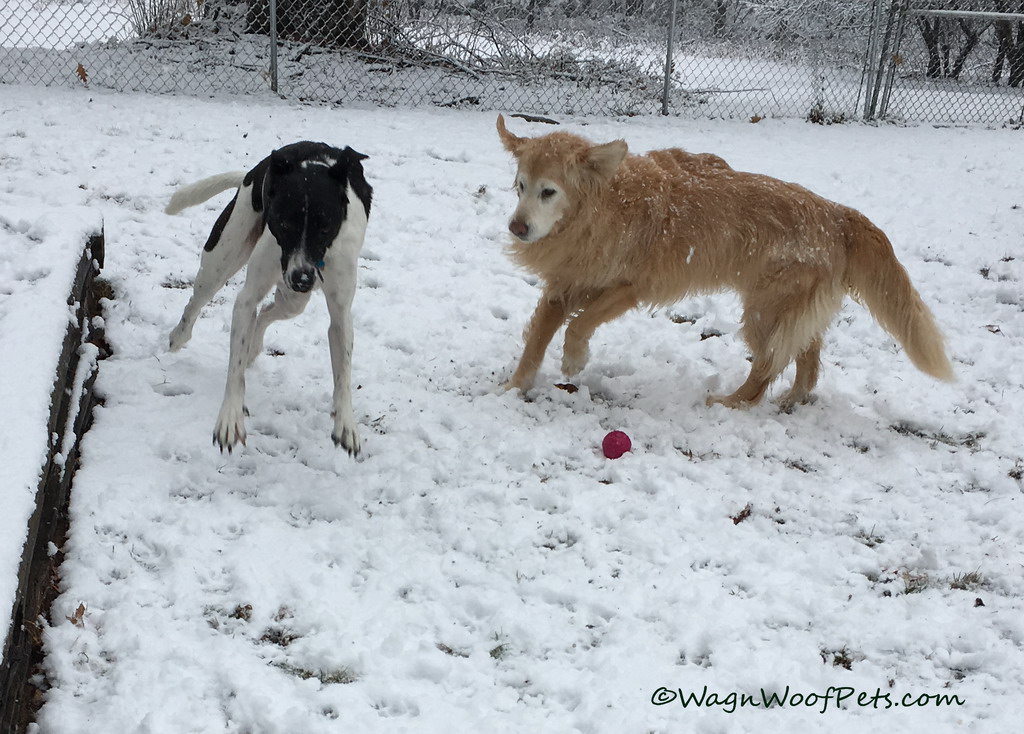 That snow didn’t last, and Cricket was back to her old self when we got our first big storm on:

The crew always played better when they had their “Team Captain”. That’s what I was most thankful for, that Cricket was back in action leading the pack.

Our first winter without Sheba, that year Cricket, Luke, and I took a walk in the snow first and then came back to play ball. By then, Cricket had an enlarged heart along with her arthritis, but she still wanted to play. We just had to keep the times shorter.

That was also our first winter with the birds and it was fun to see their reaction to the snow – they were not impressed!

This year when I opened the coop, no one went out either. Eventually the younger chickens got brave, but it was especially surprising that the guinea hens mostly stayed in the coop. Eventually they did venture out, but they are not pleased with our especially cold November either. Maybe if we had more sunshine like in last year’s photo they’d be braver.

We’ll see how they do with the big storm and hopefully get more photos. Luke and I have still been walking but it’s been SO cold that taking photos is nearly impossible. Even though we may not be playing ball anymore (though goodness knows I’ll keep trying), we will still be walking as much as we can, and will hopefully have lots of photos of Luke in his red coat against the snow! It’s going to take me a while to get used to this new normal, I just miss Cricket’s joy in the snow so much, and I know I will all winter long. However, Luke will cheer me up on our walks together, and when we’re snuggling in front of the warm wood stove afterwards.