Many of you already know the story of our golden retriever Sheba’s recent UTI. We first became aware of it when I happened to notice blood in her urine. What bothered me the most was that she had been feeling a bit out of sorts for a while before that. Her appetite wasn’t great, but we attributed it to her cancer progressing. But I now think she may have had the UTI for a while before we became aware of it, and that’s why her appetite hadn’t been good (that can be a normal symptom). 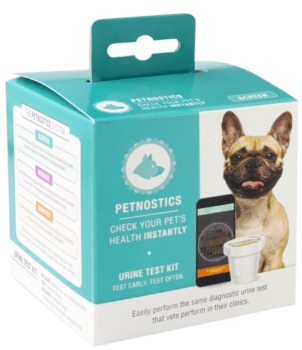 Disclaimer: This post is sponsored by Petnostics. We were compensated to share their product, but we only share products that we believe will be of interest to our readers. Petnostics is not responsible for the content of this article, all opinions are our own.

It was kind of ironic that the same evening after she had her visit to the vet and they diagnosed the UTI, we sat down to watch TV and I chose an episode of Shark Tank that I had recorded. I had actually recorded it quite a while ago after reading about the company Petnostics on our friend Melissa’s blog, Barking from the Bayou. I had been curious about the urine test kits that they made for pets, but had kind of forgotten about it.

It occurred to me now just how useful this kit could be, especially since dogs can be very good at hiding symptoms when they are not feeling well; or if in the case of a dog with another illness like Sheba, you might just attribute it to that like we did. Earlier my interest had been mostly because of Luke, who will not let any strangers near him, including the vet. I could see that being able to run this at home test for him might at least let us monitor his health somewhat and know if there was some issue that would mean we had to take him in and deal with the drama.

Now I can see how useful it could also be when you have senior dogs, to monitor them in between vet visits; so things like this might not go missed.

I asked the company if we could give their product a try and write a review, and they agreed. The kit includes everything you need: disposable cup, lid with integrated urine test strip, glove, and you can also buy their urine collector separately, which is very convenient; or you can also use the cup itself to collect. The only issue I had with the urine collector is that it’s smaller than the containers I’ve used for Sheba. If you have a long haired female dog like Sheba, it’s hard to see where you’re getting the collecting cup! So with her I need to use a larger bowl so I have a better chance of catching it when I can’t really see under there (I just shove it under and hope for the best!). But it works great for the other dogs, and that’s less containers of my own I have to dispose of.

Collecting the urine is easier than I thought it would be. Cricket did act a little bit like I was stalking her when I followed her around the yard with the collector, but she got over that. I was afraid Luke might be freaked out by it, because he can be that way; but he was fine too.

It works like this: you download an app to your phone (available at App Store and Google Play), and it only takes a couple minutes to add your pet’s information. I got all three dogs and our cat entered in there in no time. The app walks you through the steps to collect the urine and test it. It’s basically easy: collect urine, put in cup, secure lid with test strip on, flip cup over briefly to wet the strip and then back. Then line your phone up with the lid for it to read the results. Simple!

Once you have done that the results will show on your phone screen, and you can click on each detail for more information. It also makes it super easy to email the results to your vet or to yourself. I emailed them to myself so I could just print them out to take to my vet’s. Cricket had one high value, but as you can see it reassured me that this is nothing to panic over and a little research confirmed that. But I will still discuss it with our vet at her next appointment. 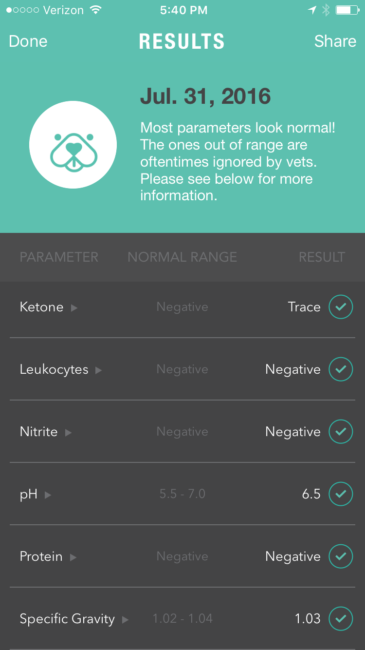 I found it funny when watching Shark Tank that Ashton Kutcher took himself out of the running to invest in this company, because he couldn’t see people wanting to collect their pets’ urine (this can be used for cats too!). Since I’ve now been there, done that, I totally disagree. We pet parents will do whatever we have to do to be assured of our pets’ health. Petnostics can provide some peace of mind in between your regular vet visits.

What if your pet is just a little under the weather and it’s the weekend or off hours for your vet’s office? We all know that’s exactly when our pets will get sick! Maybe it doesn’t seem like an emergency but running this test might give you an idea if anything is going on that you think your vet should check immediately. If all comes up clear, then maybe you can feel safer waiting until office hours because it may just be a bug or something (always take your pet in if you have any doubt though).

Dogs that get UTI’s can be prone to getting them again. So once Sheba is done with her treatment and we know she’s all better, we’ll still want to monitor her in the future to be sure she doesn’t get another one. This will really be a great tool for that; and less expensive than taking a sample to our vet periodically (less than a third of the cost to be exact, and you can buy the kits in bundles of 4 or 12 as well). Psssttt….they are actually on sale as of this date!

How might you use this tool to monitor your pets’ health?