Some of you who know me on Facebook or follow my page may already know that our beagle Kobi passed away on Thursday early morning.  I had written about his illness and the unfortunate blood test results which let us know that his organs were failing and there was nothing to be done.  In just over a week his health failed, we really couldn’t believe how quickly it happened.  We took him to the vet because his appetite hadn’t been good and he’d been throwing up off and on, and just over a week later he was gone.

The last time he ate or drank anything was Sunday morning.  When the blood test results came back on Monday, we knew we probably wouldn’t have him through the end of the week.  We thought we would have to make the decision of when it was time to let him go, but Kobi had other ideas.

He was weak and slept a lot, but he would still get up and go outside on his own, and sometimes go down the stairs before we could get to him to help him.  Kobi was a tough old guy and fought to keep his dignity right up until the end.  We knew it was close to time but every so often he would pop his head up and give us a bright eyed look that made us feel he wasn’t ready to go yet.  When I got home from work on Wednesday afternoon, he didn’t get up right away, but eventually he wanted to come outside where I was playing ball with the other dogs.  He stood on the deck for a bit, but when he seemed like he wanted to come down into the yard, I carried him.  He sat there for a while just watching us play, and when I thought he might be cold I carried him back into the house. 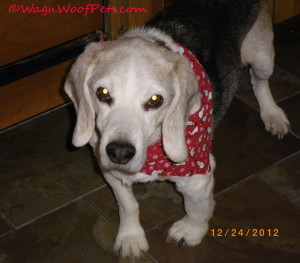 He slept peacefully for the rest of the afternoon/evening, occasionally moving from one bed or location to another, all his different favorite spots.  It wasn’t until we were going up to bed that I realized he hadn’t wanted to go outside again which was unusual.  We almost left him sleeping soundly in the office, but then my hubby decided to bring him up to bed with us.  He moved around a bit as we were trying to fall asleep and I thought he seemed weaker.  I had a bad feeling, and felt in the pit of my stomach that we would probably be calling the vet in the morning.

About 1:30am I was awoken by a sound….a groan or a grunt and I sat up and asked my hubby if that was Kobi.  He confirmed it was and we turned on the light and knew that he was dying.  He took a few shallow breaths as we stroked him and whispered to him, and then he was gone.  My hubby had been awake for a while.  Kobi had moved right up next to him and he had been petting him and keeping him close.  He had noticed changes in his breathing, but never did he feel Kobi was suffering in any way.

We can only feel blessed that he died at home with us and with his siblings nearby on the bed also.  I know he wanted it that way; to be home with his family. 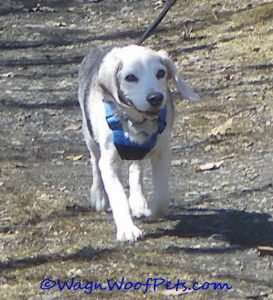 Only a year ago, at 12 years old, Kobi was extremely healthy.  Last Winter we did the Idita-Walk together, almost 1049 minutes of walking (he missed some of it because of surgery to have some lumps removed).  We really had a great year….we walked a lot.  He did some long walks with my sisters and I and some of the other dogs in the spring.  He started to slow down in the hot summer, and that’s really when he started showing his age more.  We had a great trip apple picking in the fall, and I’m so glad we took him for that.

He and I just had a wonderful walk together the weekend before he went to the vet.  He was a bit slow, but was still enjoying himself.  A week later my hubby and I took him for a nice drive.   He loves riding in the car, but the three times he was in there that week ended at the vet’s office.  Sunday we just took him a few towns over, and stopped at a grocery store to pick up some foods we hoped he would eat.  He snuggled on my lap, which is pretty good for a dog who has never really been a snuggler or a lap dog.  He had the sun on his face, and in between dozing off, he was grunting away.  Kobi has always been one to grunt when he’s content….whether getting his ears or chest rubbed, or lying in front of the warm woodstove, he would grunt.  I’ve always thought of it as his “purr”.  When we first started out on that drive I couldn’t stop the thoughts tumbling through my head…..this could be the last ride we took him for (and it was).  I tried to hide the tears slipping down my cheek from my husband.  Eventually I pulled myself together and tried to just focus on enjoying the togetherness we were all sharing.  My hubby constantly reached over to pat Kobi or just to check on him to see if he was sleeping. 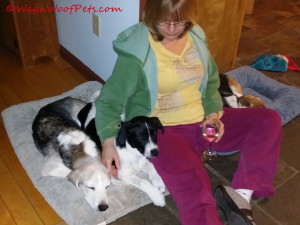 When the bad news had come that Monday evening, I got off my computer, poured myself a glass of wine and sat between the dog beds where Kobi and Cricket were sleeping in front of the wood stove, and Luke soon joined us.

I think we made the best of our last days together.

Kobi was the best dog.  When thinking back, I don’t remember a time he was ever a problem, even as a puppy.  He was around 6 months old when he came to live with us (you can read that story here), and he became best friends with our dog Maggie instantly.  I don’t remember him ever chewing up or destroying anything.  The reputation that beagles have for being barkers is unwarranted.  Yes, Kobi barked, but so do a lot of dogs.  If he was told to be quiet and come in the house, he did (that goes for his beagle sister Cricket also).  Yes, he had the beagle traits of stubbornness and independence, but that was part of his charm. 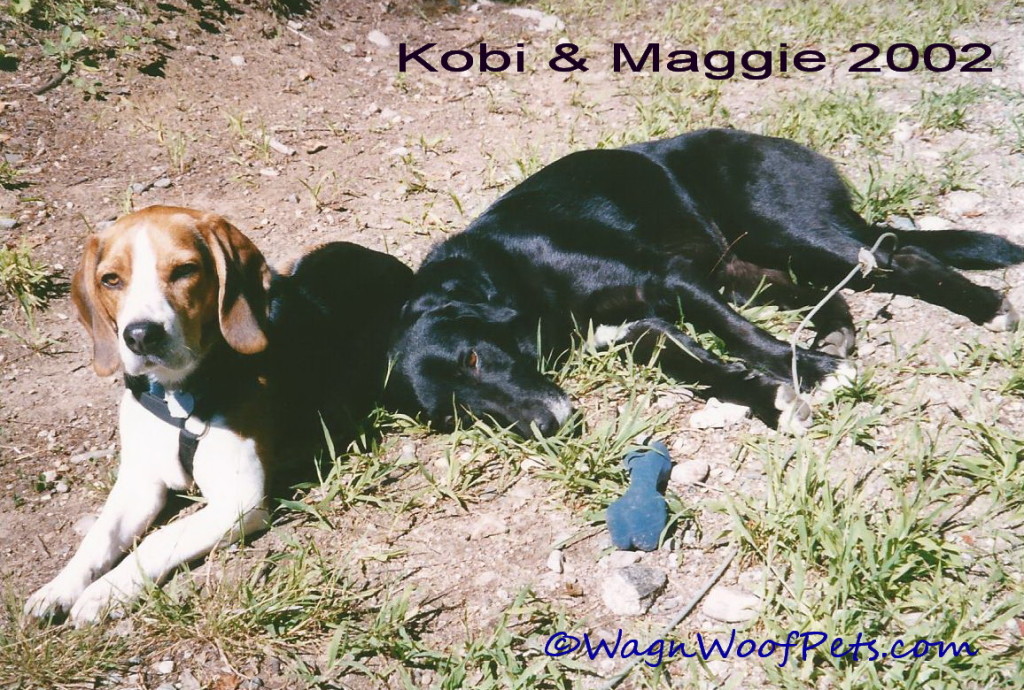 We hiked, we camped, and we took rides in our boat in those days.  When Maggie tragically died a lot of things changed.  We sold our camper and eventually the boat.  That was when the other 3 dogs joined our family, and we stayed home a lot more.  Kobi was easygoing and other than being devastated at the loss of his sister, he adjusted to all the changes that eventually came along.    We still took lots of walks and he always loved those.  He enjoyed our drives to walk the local rail trail, our trips to the bank, and the rides he took with Dad to the dump on the weekends.

We always called Kobi the serious and quiet one; he wasn’t one for playing games or chasing things.  He loved every single person and animal that he met.  He was my constant companion.  If I was in my office working, he was lying next to me.  He followed me everywhere I went around the house.  He loved to be in the kitchen with me, always somehow managing to be lying in front of whatever cabinet I needed to get into next.  If I was outside working in my garden or greenhouse he wanted to be with me.  He was content in his life as long as he was at our sides.

There is now an empty place next to me wherever I am, and a piece of my heart went with him.  I know he is now happily reunited with his sister Maggie and his brother Moses who we lost last summer.   I hope he met his sister Shelby who came and went before him.  Wherever he is, I hope there are lots of treats and lots of warm beds to lie on…..he loved to lay in front our woodstove and soak up the heat.

Kobi couldn’t have been more loved by us, and he returned that love tenfold.  Not only did he live a good life, he was a good life.

Thank you to everyone who expressed their care, concern, and sympathies on my other blog posts, and on Facebook.  Your words, thoughts, and prayers truly are helping.  It is comforting to know that so many of you understand the pain of losing a beloved pet.