This week’s challenge is one of composition; focusing on the pet’s eyes, the “windows to the soul”. This is accomplished by framing the shot tightly, excluding some of the other facial features, and/or using a shallow depth of field. This can also be done through cropping, but the challenge was to frame the shot in-camera with no cropping, and I was able to accomplish that – there was no editing of the photo I chose.

For this shot, it would have been obvious to use Luke as my model (and we did do shots of Luke as well and I’ll share the best). With his young, clear, soulful brown eyes he’s perfect. I wanted to do something different though. Cricket’s eyes have the cloudiness that is common in dogs of her age (12). In fact, at her last yearly vet exam last May, the vet asked us if she was showing signs of losing her eyesight; because she saw evidence of that during her exam.

We had not then, and now, several months later, we still do not. The Dadz and I had just discussed this the other day, when he had been outside playing with her. He was throwing a white ball in the snow, all the way across the yard, and Cricket had no trouble finding it at all! Even I have trouble spotting it sometimes. While she may be tracking it down somewhat with her nose, she still has to watch where it is thrown. My hubby had laughed at me when I gave the dogs this Planet Dog “Snowball” (*affiliate link) one Christmas, but as it turns out, it’s been fine even in the winter! The letters that were on it are long since worn off, from so much use.

Choosing Cricket as my model was far more challenging, especially outdoors, because getting her to stand still is nearly impossible, especially when there’s a ball around!

I thought this was the best shot of Luke’s beautiful eyes: 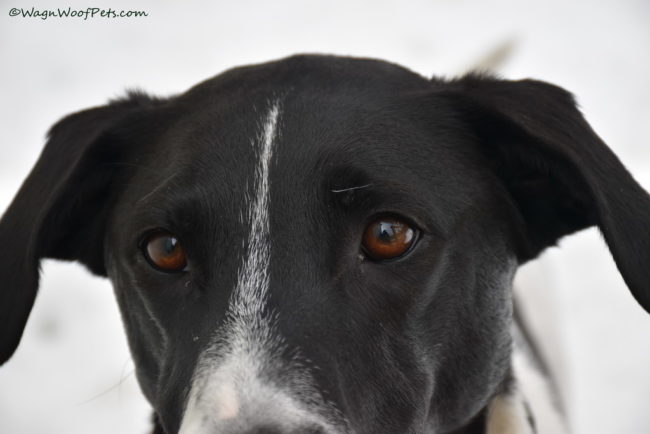 Do you think I made the right choice to enter Cricket’s photo?