The theme for this month’s Positive Pet Training Blog Hop is “My Training Mentor or Inspiration,” (someone you have worked with personally or look up to, who you aspire to or admire).

In September of 2014 I wrote a book review for Kari Neumeyer’s “Bark and Lunge”, which is about Kari’s training journey with her reactive dog Isis. Reading that book couldn’t have come at a better time for me, as at the same time we were just learning we had our own reactive dog in Luke.

It was my first true exposure to the importance of positive pet training, especially in reactive dogs. If I hadn’t read that book, I dread to think of all of the mistakes we would have made with Luke as well (not that we haven’t still made some).

Kari, and all of the hosts and bloggers who participate in this blog hop are such a help to me. However, my true inspiration comes from Luke himself. The love he gives us daily inspires me to work harder with him to hopefully one day get to the point where more people can be in his life and experience that love as well.

It’s not just his love that inspires me though, it’s his intelligence and motivation as well. He shows me the strength of his nose and how he can use it, such as in the post I wrote recently “This Nose Knows All”. That inspires me to continue his nose work training, and I’d like to try tracking with him as well.

Lately we have been continuing with his crate training. I moved the crate into the bedroom, not just to switch things up, but to give me a place to work with him on going to his crate on command. I need to work with him away from his sisters, otherwise Cricket always has her nose in there wanting the treats as well! With it being so cold outside I can’t very well put the girls out in the yard like I do during nice weather.

He really showed me his smarts when we started working on that. There were some toys in his crate, and when I got him to go into the crate he immediately started picking up the toys and putting them out of the crate! When Luke is not sure what we’re doing yet, he’ll just give me some past behavior that he learned; and in this case his brain went all the way back to before we moved to our new home last March! We were crate training then and he created his own game of putting the toys in and out of the crate. You can read more about it in this post: “DIY Positive Pet Training – Luke’s New Trick”. 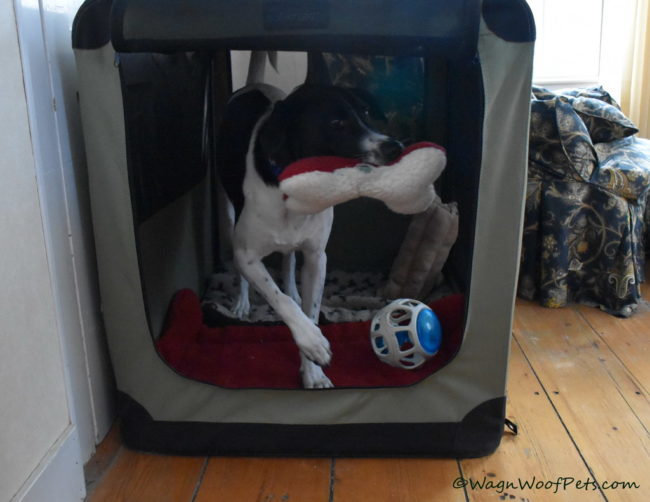 Luke’s fears and reactivity mean we’ll never run out of things to train and work on; but the true inspiration comes from the bond we have that increases every day due to his willingness to work on things; whether they are for fun or out of necessity. The smiles he brings to my face when he does something like above make it so enjoyable.

BTW, crate training is coming along great! He now easily goes into the crate on command (though he responds more to my pointing at the crate than the word “crate”), and lies down. I can zip the crate up and walk away. Sometimes he will stand back up when I do that, but when I come back, he’ll lie down again without a command. Now we’re working on getting him into the crate from further away; and increasing the time he stays in there when I’m not in sight.

He did pretty well on Christmas when we had company. He was in the bedroom with a gate and the crate in front of the gate (so he wouldn’t lunge at anyone). He barked at some people when they went by, but not everyone. My sister’s boyfriend’s daughter was even able to talk to him with no reaction, and he has never seen her before! He did get whiny later on about being down there alone, so I think he is getting ready to be in the crate and closer to everyone soon. As with everything, we’ll start out very slowly with that.

What or who inspires you to train with your dog?

Thank you to our blog hop hosts Tenacious Little Terrier and Rubicon Days.  This hop begins on the first Monday of every month and runs all week long. Each month has a theme, but any positive training post is welcome. Please visit other blogs through the links below for more positive posts!