If you saw our post “All We Want for Christmas Is…..” then you already know the crew was lamenting the end of their agility tunnel after our first snowstorm. However, the snow has long since melted and the tunnel was still together enough for some more play to happen. 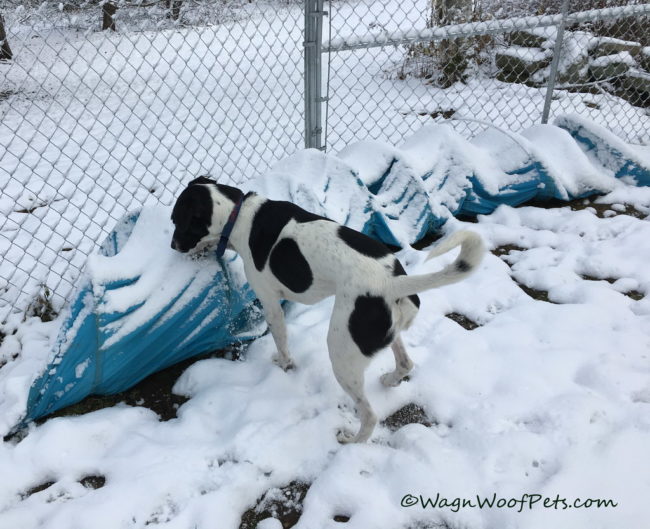 Only Luke decided to take that play to a different level. I don’t think you’ll have too much trouble answering our title question after watching this video (and pay close attention to Sheba as well!):

I hope you’re not bored with all the tunnel talk, but when he started doing that, I just had to share it with you! Now you might wonder why I would let Luke be that naughty and destructive. Well, for one thing, it just made me laugh! Especially when Sheba headed in there – I thought I was going to have to stop the video to rescue her from getting stuck, but when she popped out of that hole it was just too funny!

Not only is the tunnel headed for the trash anyway, but look at all the exercise he was getting! Since I struggle to get the retrievers around here to play fetch, I have to do everything I can to get this young man enough exercise. Even though Cricket has been playing more lately – yay! – and that motivates Luke and Sheba to play more, it’s still never enough for Luke so I have to take advantage of any chance I can get.

I think Santa will forgive him this one; after all, I think he was just worried maybe I really wasn’t going to get them a new tunnel since this one was still going (don’t tell him I already ordered one anyway). He wanted to be sure this old tunnel was completely ready for the trash (he knows the Momz has trouble throwing anything out too)!

Is Santa going to have to forgive your pet(s) for anything this Christmas season?