For some reason, the wildlife has been very active in our yard lately, and we’ve been enjoying watching the wild turkeys and deer wandering through, even in the middle of the day.

There have been at least three turkeys, and three deer that we’ve seen. One pair of deer is a mother and a young one who still has it’s spots! I didn’t get any photos of them yet, but I was able to get some of this good size doe. I was using my telephoto lens, but I still got quite close to her to get these shots. You can see she is keeping an eye on me, but I never spooked her away. 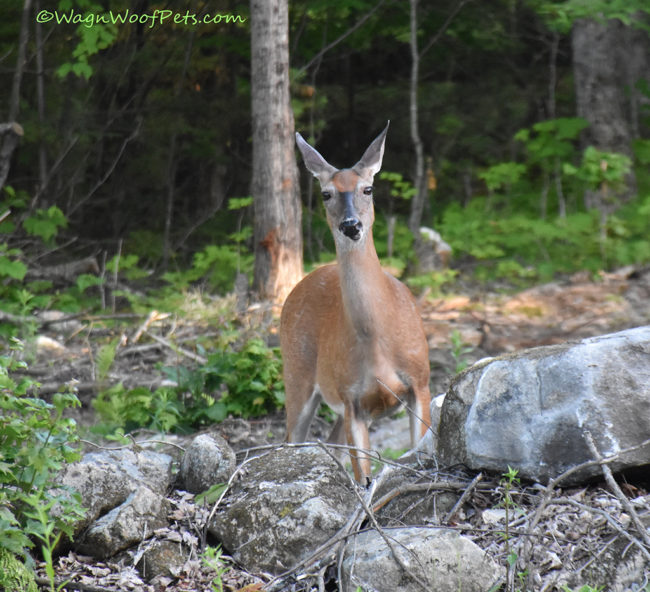 The turkeys seem to act like they own the place, and two different times my hubby has seen one strutting right by the dining room window early in the morning.

We’re not sure exactly why they’ve been around so much, other than maybe the fact that we had many trees cut and that’s led to new vegetation being available. They seem to move around the edges of the yard, right along the woods.

However, this increased wildlife activity has not been all good. Last Thursday evening around 5:00 I heard the chickens making some funny noises outside. I went to the window to look and to my horror saw what looked like a fox over near the chicken coop, but hiding partially behind the stone wall. I exclaimed (probably something not family friendly) and started running toward the door. My exclamation caused the dogs to bark, thank goodness, because that seemed to be what scared it and it ran away. No chickens were harmed!! Luke and Cricket did their job perfectly, as they were seen doing in our post last week.

Hubby was at work and I called him in a panic. He told me to get the chickens in the coop which I was able to. However, since that evening, they have not cooperated with being put in the coop early! In addition, over the weekend, we also had a hawk nearby. I don’t think that he was watching the chickens (we’ve seen one or two around in the past, before we got the chickens), and luckily he called out a lot from high up in a tree at the edge of the yard, so we knew when he was there, and were able to scare him off.

So we’ve been keeping a close eye on things and are coming up with other plans to try to keep the girls safe. I’ll share some of the things we’re doing in another post, once we see if they all work. Hawks and other birds of prey are protected in our state, so scaring or keeping them away is the best we can do. We don’t want to take drastic measures if we don’t have to anyway. At night and when we’re not home they are safe inside their coop. I just don’t like the fact that predators are showing up in the daylight, that is worrisome.

Luckily the chickens spend much of their time in the barn or on and under our front porch. I like that location for them since they’re right next to the house and wildlife would have to run (or fly) pretty far out in the open to get to them. We are going to have to be diligent, however, especially when they’re wandering in other areas.

I’d still be happier if we could get the chickens in their coop a little earlier. I know many of our readers have or had chickens, so if you have any tips on that or deterring predators, please share!

So Luke and Cricket have been busy keeping an eye on things and it’s helping them with their activity challenge too. Have you voted yet on which dog is the most active? If you haven’t, visit our post from last Friday “Jelly Bean VS Nosy Bean – Who’s the Most Active Dog?“. We’re giving away a prize package to one of our readers who picks the right dog to win, with the Poof Pet Activity Monitor as the final judge. Go on over and join the fun!