This last weekend was a little rough. There was a lot going on to deal with. It wasn’t all bad stuff, much of it was good, and that was the only thing that got me through it.

The sale of our house ran into some issues via the inspections. Something very unexpected came up in them and really threw us for a loop (I won’t bore you with the details because it’s a LONG story!). One of my best friends was coming up for the weekend, and she had just arrived and we were sitting down to lunch when the deal to sell our house basically fell apart via e-mail.

So I was trying to handle all that while not wanting to ignore my friend. It was impossible not to let it distract me and I had to fight not to let it get me down completely. Let me just cut to the chase here and not leave you wondering….we were able to get the deal back on track this week and we are back to having our house finally SOLD (knock wood! I will be knocking wood from now until closing). Every obstacle is hopefully out of the way and we plan to be closing and moving into our new house on March 18th. Yahoo!

Back to the weekend….while all that was going on, we also had to deal with the issue of having someone stay at our house, and the fact that Luke does not like strangers. Even though he has met this friend before, it has been a long time since her last visit, so it’s basically all new. Plus she was the first person at our house that he actually lunged at, scaring the heck out of all of us, and making me fear that biting someone could be next.

I put a management plan in place that involved two baby gates, a leash, and lots of maneuvering around. The goal was to have him know she was there, but to basically not have to interact with her directly. My hope was that doing things gradually would help him get used to having other people around, and to realize that he would not be forced to engage with them if it made him uncomfortable. The one thing that helped to complicate my plan was the fact that the weather was frigid and keeping Luke outside for any length of time was impossible.

In spite of that, it went very well. There was some barking when he’d get a glimpse of her, but never frenzied barking and lunging.  In the past he would bark when he just heard a strange voice in the house but he seemed to get used to hers and it didn’t bother him. I had him upstairs with me Saturday morning and we could clearly hear my hubby and friend chatting away, and he did not bark at all.

It went so well it was tempting to try to do more. I resisted that temptation for two reasons. One, I really believe we needed to be doing it the gradual way we did and that in the long run it would pay off; and two, I didn’t want it to go badly and then be disappointed. I wanted to end it all on an optimistic note and that’s what we did. He was even looking for my friend when I came back home Sunday morning from taking her to the bus station. The next time she comes I feel like we can move on to the next step, letting him see her more at a safe distance, on a leash or in a crate. That will actually be easier in our new house which is open concept and far more roomy. 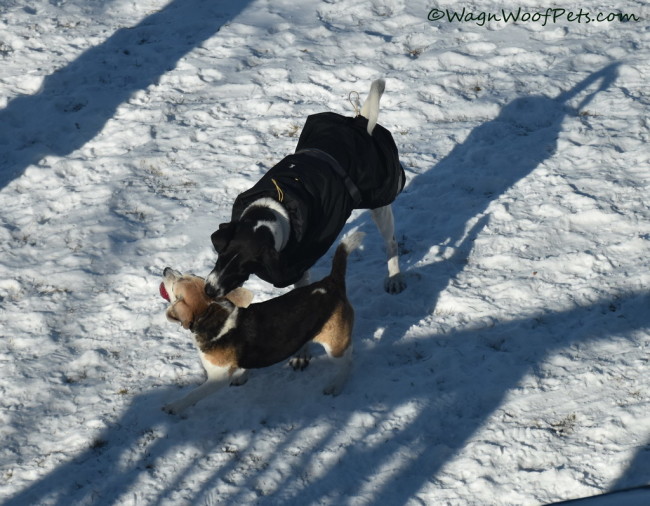 The way it went also gave me hope that using the crate will be a good tool to move this to the next step. That is still in the works….we’re making progress with the crate but it is very slow. Now that we have no more house showings and can leave it set up all the time, we’re able to work on things more. I’ll be writing a post about it for the next Positive Pet Training Hop. Luke really showed me just how smart he is when we were working on it yesterday, and we had a breakthrough; however, I want to make sure it wasn’t just a fluke before sharing about it.

I felt badly that my friend had to deal with all the house drama when she was here, not to mention the challenges of keeping Luke and her apart; but she was very understanding about it all. We had a nice get together at my sister’s house Saturday evening, and both that and the company for the weekend at least kept my mind off the house at times. Plus having a close friend there to talk to was a great help as well.

In spite of the good outweighing the bad, by Sunday the migraine that I had been fighting since Friday kicked in completely. I decided to give myself a break and I spent some time curled up on the couch with a good book (Showstoppers: The Returns 2

* by our friend M.K. Clinton) and my boy Luke who I was very proud of.

*Affiliate link: if you order through this link we may receive a small commission but you will still pay the same price.