I’ve said before that the main reason I wanted to get chickens was for the fresh eggs; I never anticipated how much fun they would be. They are extremely social birds, often act like dogs (following you around hoping for treats), and as it turns out can be a gateway to other birds. In our case that has been the guinea hens, but we’ve also discussed ducks, geese, and turkeys. We’re not planning on adding any more species at this point, letting our girls hatch their own eggs will be our next venture, which I think will keep us busy this spring!

The other thing that surprised me was this: I thought you’d just get some chickens and they’d lay their eggs daily in their nice neat nesting boxes. As I’ve written previously (“The Never-Ending Easter Egg Hunt”), it’s not always that simple.

As it turns out, they only lay prolifically for their first year or two, and even that can be hit or miss. They slow down after that, though some days I don’t think ours ever sped up! These days, with 27 laying hens, the most eggs we’ve gotten in one day recently has been 14. The average did go up once we got past the shortest day of the year and the older girls got through their molts (they have a hard molt for the first time when they are a year old, mostly in the fall). 9- 10 is pretty average these days, but they do like to keep us guessing!

At this time our flock consists of 8 almost 3 year-old girls, 8 almost 2 year-olds, and 12 almost 1 year-olds (1 is a rooster and not a layer). Then there are the 9 guinea hens, 7 males and 2 females. If you’ve been reading this blog for long, you know the guinea hens are another whole story (they won’t start laying again until spring when all the snow is gone).

I was excited about our first green eggs from two of our Araucanas (I finally found the 3rd of that breed in a nesting box…I thought she was never going to lay an egg – but her eggs are cream colored, not green like I hoped); now I haven’t seen a green egg in DAYS (each bird always lays the same color). We chose the breeds we did for their egg laying abilities, along with cold weather tolerance and temperament. It really surprises me that with 27 birds, we rarely get even a dozen eggs per day. I worry we’re doing something wrong, but we certainly try to do everything right. I guess this is just the way it is? They are fickle creatures? Maybe it’s just the bookkeeper in me that is obsessed with the numbers!

Anyway, even though there may be days that I get frustrated, like when we keep selling out of eggs, it’s all good. Then there’s the other side of the coin when our fickle neighbors aren’t showing up to buy any, and we have cartons of eggs piling up on the counter! We’ve solved that issue at least, since hubby can now take them to the store where he works where they sell very quickly. We’re never going to get rich from our birds anyway, I’m pretty sure we’ll never even break even! Selling the eggs just helps to pay for their feed.

But most days it’s simply fun. I love going out to check and see who’s in the boxes, and what we have for eggs. I go out several times per day. That’s necessary especially when it’s cold since you don’t want eggs freezing; plus collecting eggs often keeps them from accidentally getting broken which can happen when the birds are in and out of the boxes. Mostly I just do it because I enjoy it (though maybe a little less this time of year when I have to bundle up every time I go out the door!), and I want to know who is laying and who isn’t (often times they are in and out and I never know).

Sometimes we get funny little surprises, like very small eggs, or really large ones! The photo below shows a variety of sizes we can get, with the one in the middle being normal size. The tiny ones are rare, but you can’t help but chuckle and wonder “how the heck did that happen?”.

The photo below shows two of our Buff Orpingtons, some of the oldest girls. One of these had been spending a lot of time in a box in the garage recently, and leaving an egg almost daily for quite a few days (she seemed to stop when the weather got really cold)! They are big girls, and I think responsible for that extra large egg. 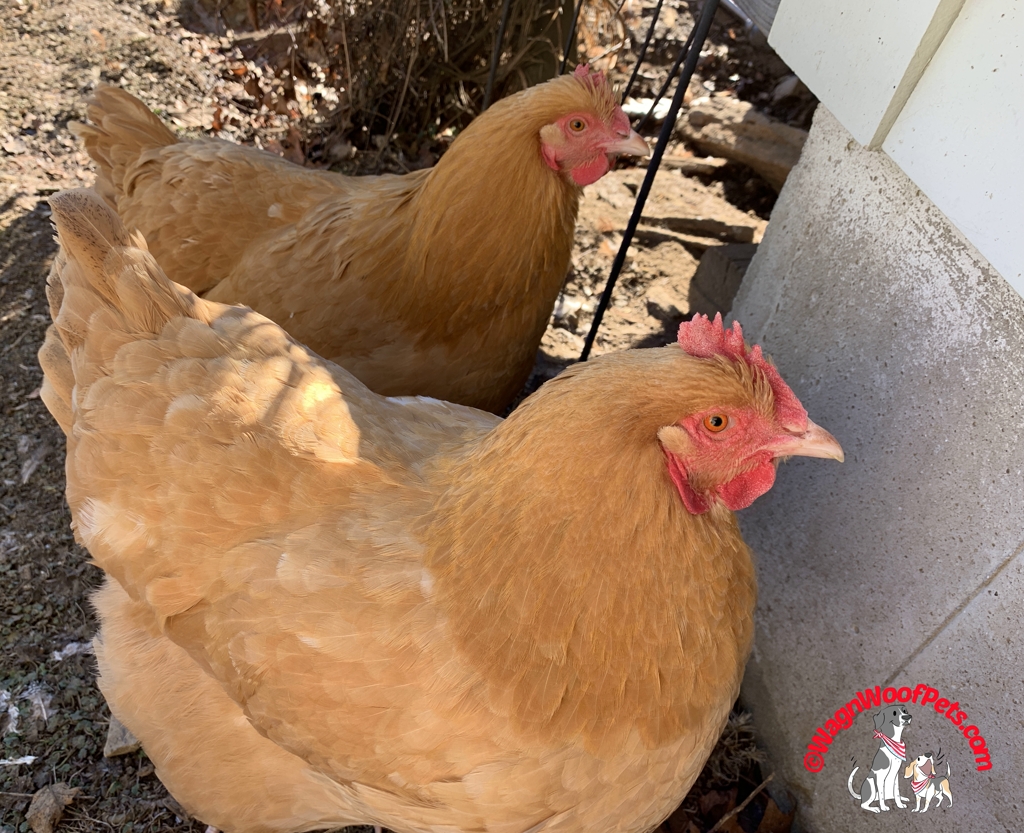 I’m pretty sure the girls live to keep us guessing as to what’s going to happen next. They certainly don’t want us to figure it out! It’s all part of the joy of having our farm birds and seeing what each day might bring.