Our angel Labrador retriever mix, Maggie, was only my second dog. My hubby had dogs growing up, but I never had any until after marrying him and building our own home in NH. We had lost our first dog, Shelby, at only 6 years old from lymphoma. We got Maggie as a puppy in 1999 just a few months after Shelby’s loss. It was especially fun since my sister and her hubby also got a puppy from the same litter.

Maggie and her brother Bear were close, they had many play dates and were included in almost all our family gatherings. When our beagle Kobi unexpectedly joined our family, he and Maggie quickly became very best friends too. Maggie was beautiful, sweet, and loving, and we could not have loved her more. We spent most weekends and vacations camping and hiking with Maggie and Kobi, and often my sister and her hubby joined us with Bear.

Our elderly neighbors had helped us with Shelby when she was ill. The side effects of her cancer meds caused her to have to pee frequently, and since hubby and I both worked full time, having our neighbor come and let her outside made all our lives easier. That led to them to helping out with Maggie’s housebreaking as well. They would have Maggie, and then Maggie and Kobi, at their house sometimes when we were working, and it made everyone happy.

We knew that it was just a bit risky. Both Maggie and Kobi were strong dogs (and strong willed!) and could be challenging for Roland to handle. One time, Kobi broke away from him to chase a bear! Kobi’s leash got tangled in a tree not far from the house, and we were called home and Maggie ended up helping us to find him. But most of the time, the dogs just hung out in the house with Roland and his wife, and we would even deliver and then pick them up, which seemed safer.

Roland and Claire loved those dogs so much, and the dogs loved them too. It seemed to be the right thing to do to make them all happy, so we continued to let them visit.

One evening my sister asked me to go to a baseball game one of our nephews was playing in. I didn’t often go, I don’t care that much for watching sports, but I wanted to support my family and see my siblings as well. Hubby was at work, and instead of leaving the dogs home alone, I thought they’d enjoy going to the neighbors, so I brought them over there.

Oddly, when we got to the baseball game, our brother was not there. As we watched the game, we realized we couldn’t spot our nephew either! It turned out it was the wrong night for the game. As we left, it seemed a shame to have so little time together, so I suggested we go get something to eat somewhere, and so we did.

Doing what I thought were the right things for everyone that evening turned out to be all wrong.

As I later pulled in the driveway and my hubby angrily asked me where I had been (I usually let him know I’ll be going somewhere but completely forgot), I knew there was far more wrong than my forgetfulness: Maggie had pulled away from Roland when he had the dogs outside and she chased a truck. She did not survive. We knew Maggie was a car chaser – who knows why? – so she was never allowed off leash when near roads. But she was strong and determined and able to pull the leash right out of Roland’s hand.

To say we were all shocked and heartbroken seems like an understatement. We were devastated and I was left wondering how every little choice and decision I had made that evening could lead to such a tragedy.

Was it part of an intricate plan from above, or was it just completely random? How could I do what I thought were the right things – supporting family, and letting our dogs enjoy our elderly neighbors making them all happy – and have it end so badly?

To this day, I wonder about all that. I used to have a strong faith in God up to that point, even though we didn’t practice any religion. It hasn’t been the same since. I can’t say whether I believe in God or not; sometimes I do and sometimes I don’t. I have a difficult time reconciling that doing the right things could lead to such a tragedy, and frankly, I still feel that way. Every decision I made that evening led to that heartbreak. Was it supposed to go that way (why?) or do things just spin randomly out of control?

My point in sharing this story is to illustrate that pets can influence us in ways we’d never imagine. We cannot underestimate their importance in our lives. Our lives changed greatly after Maggie’s loss – we stopped camping and hiking, added three more dogs to our family, and became homebodies.

Whether those changes were meant to be, or whether we were just doing what we needed to in order to survive our grief, will always be a mystery to me, even all these years later. I’ve drafted this story numerous times in my mind over the years, and even written and then deleted it.

I had a dream recently, and Maggie was in it. Nothing unusual happened in the dream, but she was there, and I wondered if she was telling me that it was indeed time to share this story. I think it’s a fitting end to Wag ‘n Woof Pets, and it was always in the back of my mind that I would write this when I decided to end this blog.

Maggie has appeared in my dreams in meaningful ways before – shortly after her death she came to me one morning when I was sleeping in the camper with Kobi beside me. In that dream I was able to hug her and kiss her. It was so real I could feel her fur. I said goodbye as I never got to in real life.

By the way, Luke was born on Maggie’s birthday, and that was one of the main reasons he ended up joining our family. Maggie’s influence on our lives has lived on. 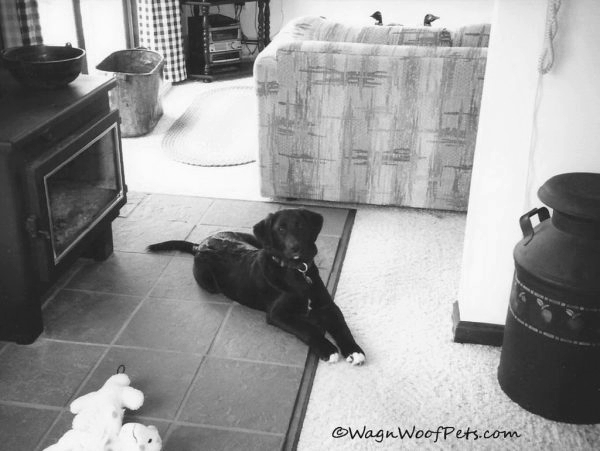 “There are more things in heaven and earth…..than are dreamt of in our philosophy.” – William Shakespeare (Hamlet)

If you’d like to read another post on how pets influence our lives, I invite you to read one of my earliest posts “A Spiritual Awakening of Sorts”, a story about Shelby and another dog who helped to change my life at another time.

(BTW, there will be one final post for Wag ‘n Woof Pets, before I switch over to the new website and blog.)