National Mill Dog Rescue is the organization that made me more aware of the horror of puppy mills.  Of course, I always knew they existed.  To be honest, in my local area not many pet stores sell puppies anymore.  I think that led me to believe that puppy mills were a much smaller problem than they still are.  I don’t remember exactly when I came across NMDR, but it was on Facebook through another rescue or dog organization I am sure.

This rescue was established in 2007.  They are a 501(c)(3) non-profit organization.  Their mission is as follows: “to rescue, rehabilitate, and rehome discarded breeding dogs and to educate the general public about the cruel realities of the commercial dog breeding industry”.

In February of that year, Theresa Strader, founder and executive director of NMDR, rescued an Italian Greyhound and 12 other dogs from a dog auction in Missouri.  The greyhound was named Lily and became a much loved member of the Strader family.  NMDR was started in her honor.  Lily was in a puppy mill for 7 years where she was used as a breeding dog.  She was kept in a small cold wire cage in a dark barn.  She got no exercise and no socialization.  There was no veterinary care, and therefore no dental care.  She lived on poor quality dog food and drank water out of a rabbit bottle.  She was never given a chew toy.  Because of all this, eventually Lily lost all of her teeth and the roof of her mouth and her lower jaw rotted away.  She had many tumors, and was initially terrified of people.

The Straders gave her the veterinary care and love that she needed, and she eventually became a loving dog who would climb in people’s laps.  In spite of all the Strader family did to help her, after 15 months there was no more they could do, and Lily succumbed to her illnesses caused by 7 years of neglect.  Her legacy of love lives on in the work that NMDR does in her honor.

NMDR has a facility known as “Lily’s Haven” in Colorado Springs.  They travel around the country rescuing dogs and bringing them back to the haven, or delivering them to other shelters to be helped (one trip per month is made to New York).  In an average month they rescue 140 dogs.  At any given time there may be up to 110 dogs in their kennel and 100 dogs in foster care.  60 dogs per month get adopted out.  An average rehabilitation stay for a dog would be 6-8 weeks, and this is a no kill shelter.  They have over 1300 volunteers, and to date have rescued over 6800 dogs.

Lily’s Haven is the first step for dogs on their way to their forever homes.  They have large kennels where they are allowed to go in and out freely.  They have parties and playtimes, and a very large fenced in yard to play in.  There is a special room for rehabilitation, set up just like a quiet, comfy room in a home; here they can work with especially traumatized dogs to help them adjust.

Adoption fees are reasonable:  $300 for a puppy up to 6 months old, $250 for a dog 6 months to 8 years old, and $150 for any dog over 8.  The cost of caring for these dogs is much more than this, and each dog is spayed/neutered, and has had its basic shots such as rabies, as well as dental care as needed.  Applications must be filled out and requirements met, but these are all reasonable and standard practice.  However, they do not transport so you must go to Colorado if you would like to adopt one of these dogs in their shelter.

You may find out more about NMDR on their website.  There is so much more to their story.   Please be sure to check out the pages for “Lily’s Story” and “Lily’s Tribute” – have tissues handy!  Please make a donation if you can.  For a $10 donation you will receive a “Heart and Paw” charm on a card with Lily’s Story.  See the photos above and below of our dog Cricket wearing hers.

The fact that puppy mills exist is heartbreaking.  How encouraging to know that there are people out there doing everything they can to help as many dogs as they can, until we can put an end to them for good. 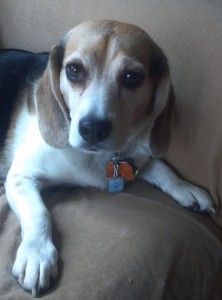