On May 21st I shared the passing of our beloved cat, Conrad. I want to thank everyone for the thoughtful condolences you left on that post…they helped me very much through that difficult time. Now I want to share with you happy memories of his life throughout the years.

We adopted Conrad in 1999 from our local shelter. I’ll never forget that day. We must have held 15 or more different cats. They were all sweet but none felt like they were “the one”. There was one buff colored tiger cat staying to the back of a cage. I had a buff tiger when I was young, so had to see this one. He was shy and reluctant to come out, but when they put him into my hubby’s arms, he snuggled right in. We knew he was the one. 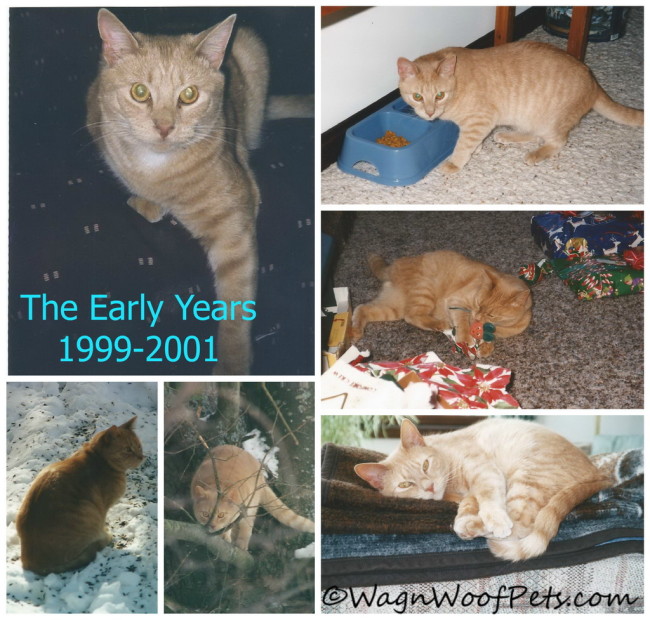 He spent the first two weeks in our home hiding under a bed. He didn’t care for our dog; but eventually he learned to come out and just avoid her…as he did with most of our dogs over the years (until later). Company who came to our house never saw him, but he was always loving and affectionate with us.

You can see in some of the above photos why I called him our “golden boy with the golden eyes”. He was an outdoor cat to start with, but later stayed indoors with his sisters Katie and Samantha who came along in 2002. He and Katie were extremely close.

Katie died from cancer in 2011. I know how much Conrad missed her….he yowled at night for quite a while. We still had Samantha, but she had always been a loner and they just weren’t as close. It was not long after that when Conrad started showing his age. He stopped grooming himself and got too lazy to always use the litter box. He went through many tests more than once at the vet, but nothing was ever found wrong with him other than aging. It’s always been my theory that his heart was broken after losing Katie. 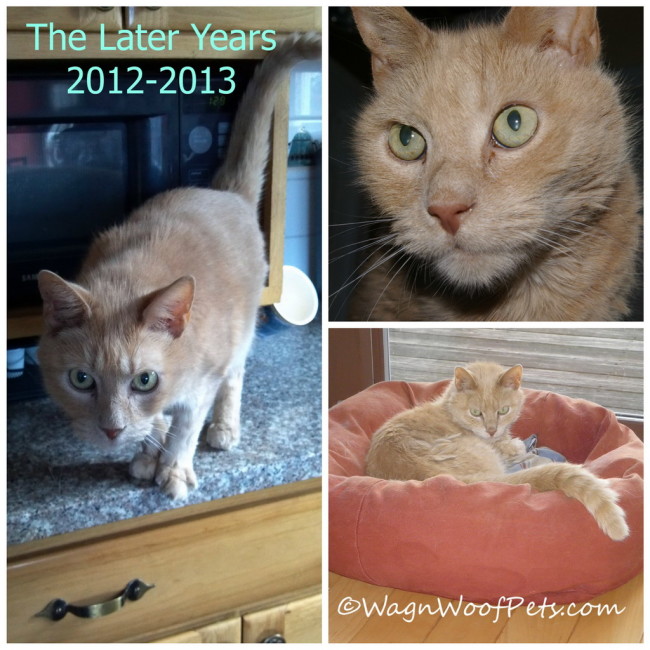 However, something else happened that was good. After a while, he stopped hiding out all the time. He spent more time hanging around, even when the dogs were there. 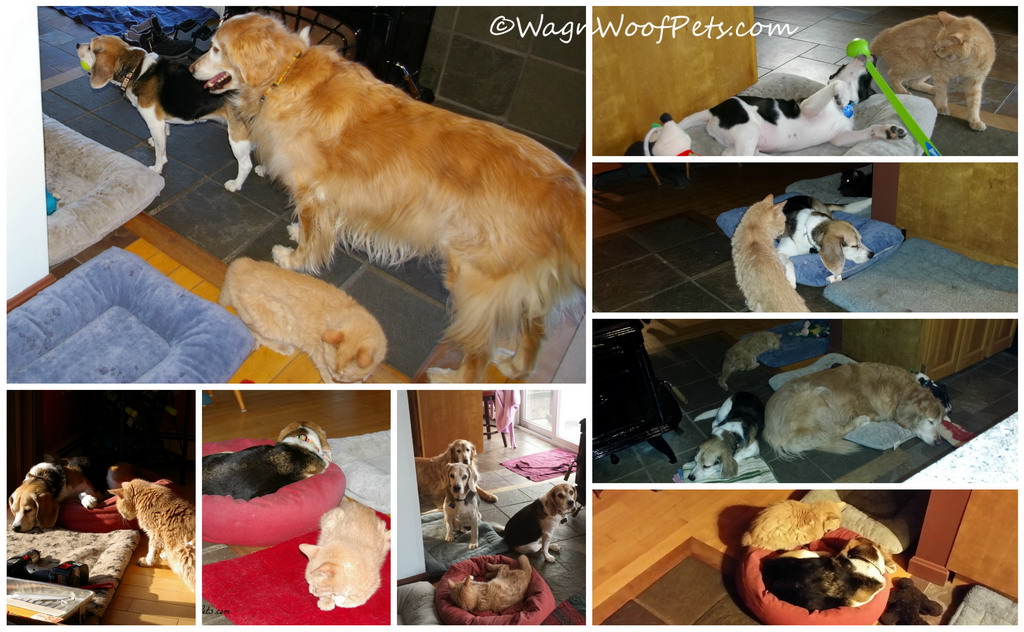 He started entertaining us with silly antics like seen below, which I’ve written about here quite a few times. 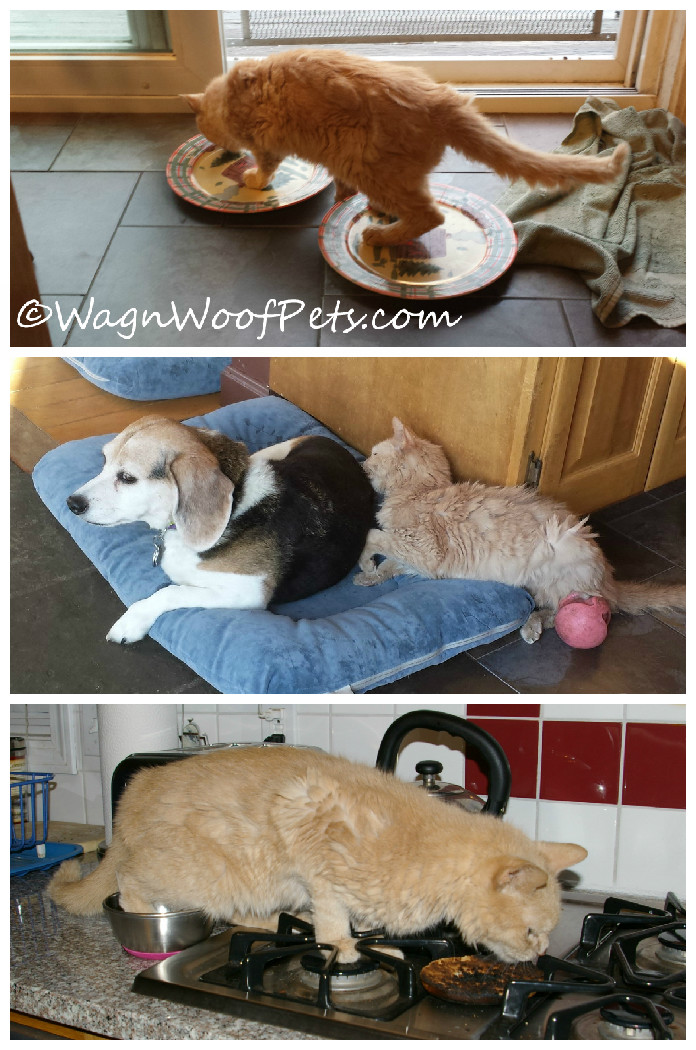 He became our chief photo bomber whenever I was doing treat tastings with the dogs.

He and Sam even became a bit closer. 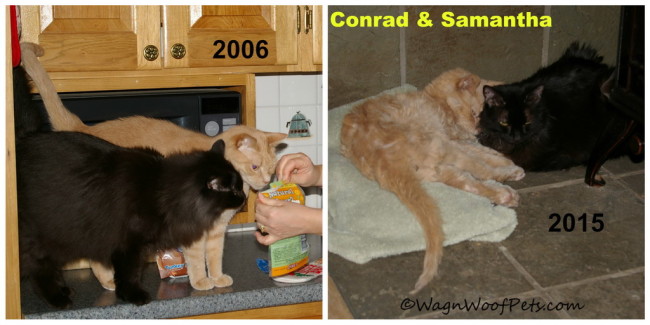 His health was clearly declining, but he fought on right up to the end. He never gave up his will to live, his old and frail body just gave out on him. Now we have cherished memories. I love the photo below….golden cat and golden dog blended together in the golden evening sun. 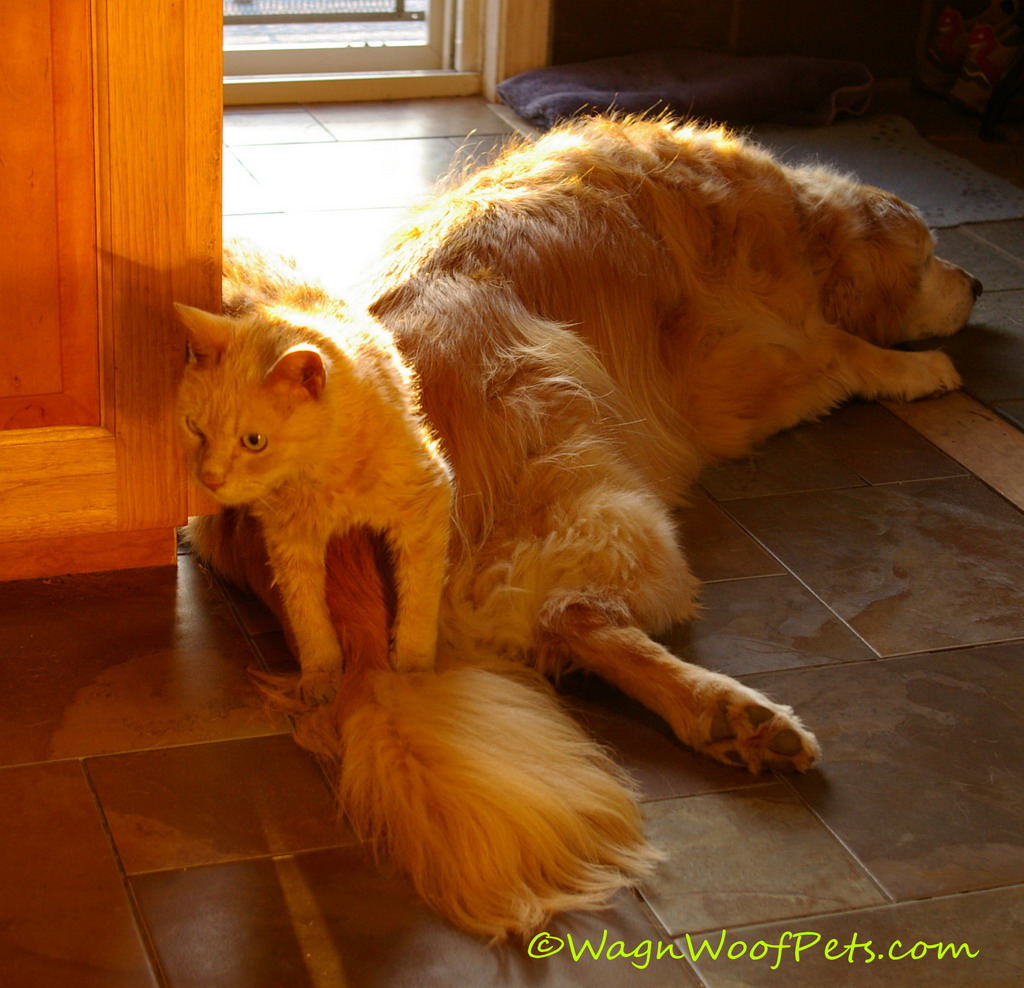 I want to thank our friend JoAnn from Sand Spring Chesapeakes for sending this special candle along with a card for Conrad. We won a prize pack from her and finding these things in there really touched me. Now I have this favorite photo of Conrad and Katie on display with the candle.

Conrad has been laid to rest in our memorial garden along with past feline and canine siblings. I’ll be sharing photos of the garden once I have all my summer plantings done, I bought a special golden plant just for him.