This is my second in my series of posts about each of the dogs’ fitness programs.  You can read Part 1, about Cricket, here.

Sheba is our 8 year old female Golden Retriever.  We think she’s in pretty good shape right now, she weighs just under 67 pounds and that has been her weight consistently over the past few years, with only slight variations up or down.  It’s always harder to tell with her longer fur, but when we think she might be getting heavier, we adjust her food accordingly and she slims back down.  I can just feel her ribs now, and when I press her fur down, she has a good indent at her waist.  I thought she was getting heavier again, but when she had her annual vet visit, she had gained less than a pound, and our vet felt she was at a healthy weight.  SlimDoggy has a great post that gives ideal weights for different breeds of dogs, and Sheba falls in with their guidelines also.

Still, we’ve been trying to add some variety to our workouts, and wanted to get Sheba beyond the almost daily ball playing, and occasional walks.  Sheba is not as avid about chasing the ball as Cricket is, she gets bored after a time.  Cricket is always the one to bring the ball back while Sheba and Moses watch, as well, so she doesn’t get as much of a workout.   We had started running with Cricket, and decided that running might be good for Sheba also.

As it turns out, I think it was a good decision, because Sheba LOVES running!  We have started out slow, but she has been a few times now, and she even went once with Dad, who always runs farther and faster than I do.  He was impressed with how well she did.

Our runs have been a little scattered lately due to inclement weather, and family obligations, but we are trying to get back in the routine now.  So Thursday morning I decided to change our route for a little variety, and also to be able to add some time and distance more easily.  So we ventured out to our local rail trail.  There is no end to how far we can go as the trail goes for miles and  miles in either direction from our street. 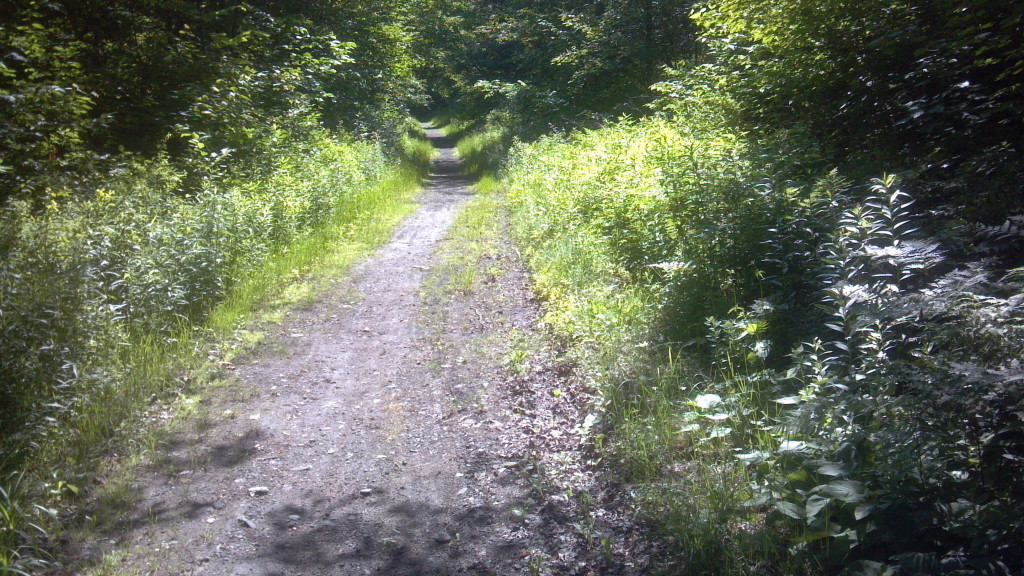 We walked the .2 miles down to the trail to warm up and then started running when we hit the trail.  I had checked some rough distances using the car, and I think we ran about a mile and a half, as well as our .2 mile warm up and then cool down on the street.  We only had brief stops for some photos and to take some sips of water.   I had just bought two new water bottles for the dogs, thanks to a blog post on Cascadian Nomads.  These bottles, called H2O4K9, are lightweight stainless steel with removable caps large enough for a dog to drink out of.  We took the smaller bottle for this shorter run, but I wasn’t sure how Sheba would do drinking out of the cap.  At first she didn’t want to, but then when she saw me dumping the water into the cap, she wanted to drink it as it was coming out!  When we got back home she drank right out of the cap, no problem.  So this will be great, especially as the mornings get warmer and we start running further. 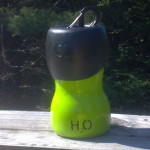 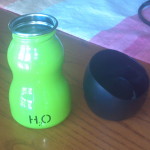 I also got a new app on my cell phone to try to track our distance more accurately, but I couldn’t get it to work!  I might need the hubby’s help on that one.  My phone is getting older and always seems to have issues, but I hate to spend the money on a new one!  We’ll get that all figured out in time.

We cross a bridge high above the river at one point, and stop to catch our breath and take some photos: 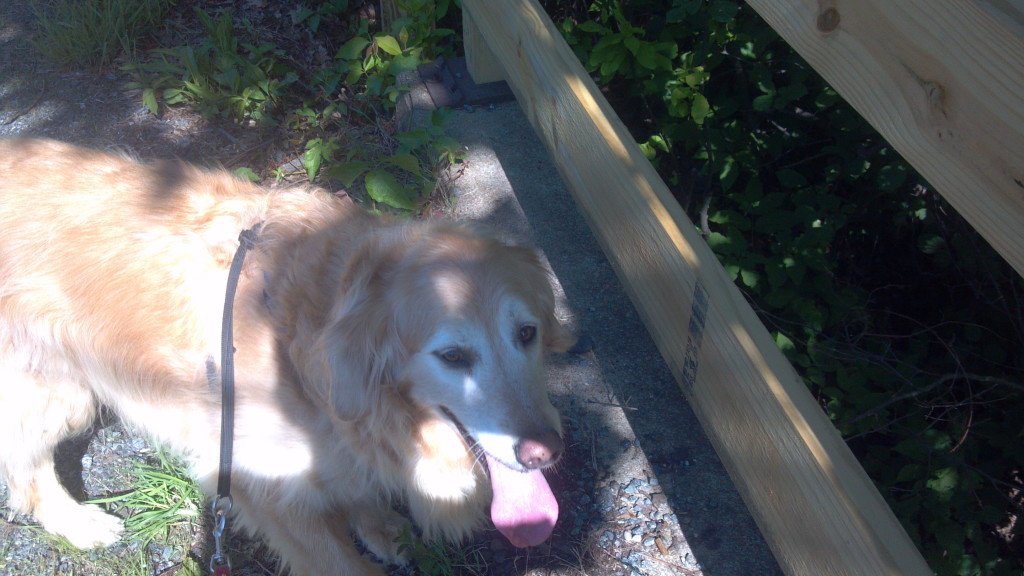 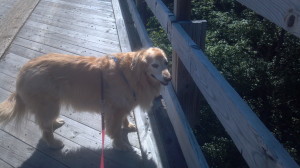 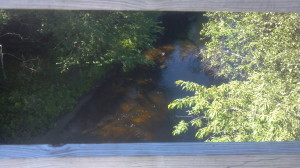 Sheba decides to take a little rest when we stop to try out the water bottle! 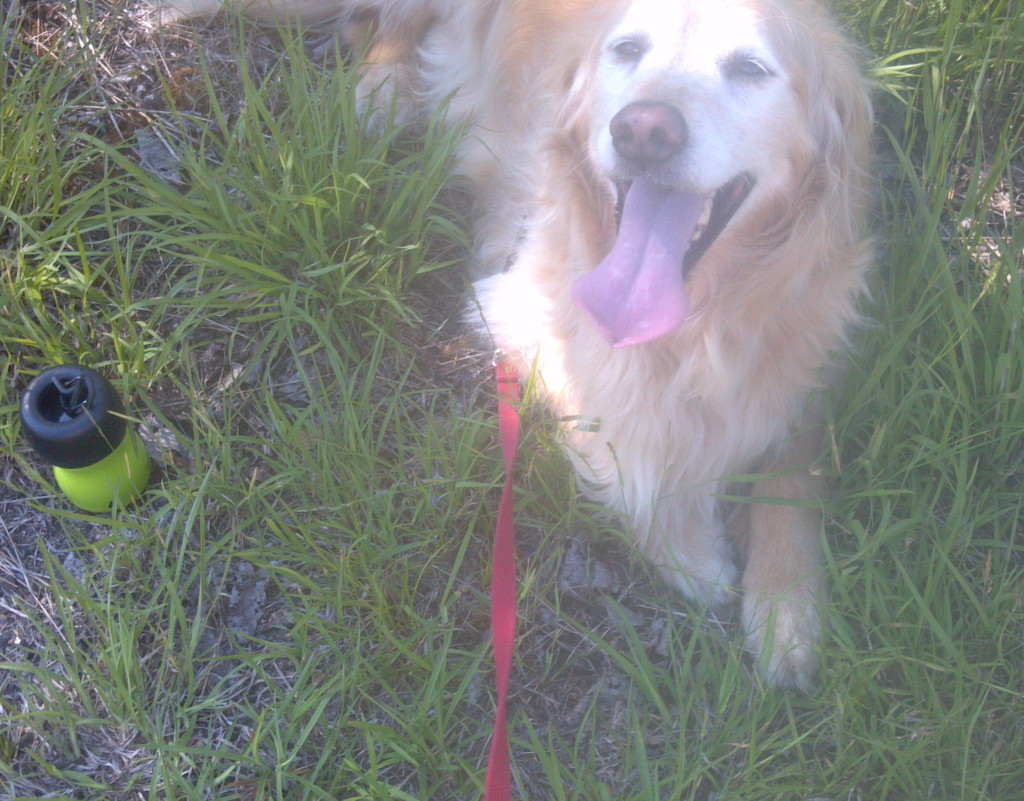 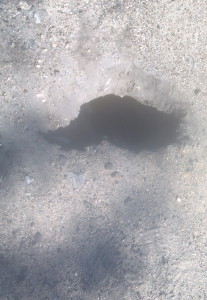 What’s a good thing about running with your dog?  When that dog stops to stick her nose in a pothole in the middle of the trail….it might not have been good if I had found that on my own, with my foot!

After we had turned around and were on our way back, I saw something moving some distance away on the trail ahead.  Now you should know that we have black bears in our neighborhood, and I am always worried about running into one!  However, as we got closer I could see this animal had longer legs…..at first I wasn’t sure if it was someone with a dog or not.  As it turned out, it was a Whitetail deer!  Now I was very concerned that Sheba was going to see it, and get overly excited.  To my good luck though, she picked up the smell of the deer and had her nose to the ground following the smell, and I don’t think she ever saw it!  It stayed on the trail ahead of us for a bit, but then when we got too close, he darted off into the woods.  I tried to get a photo, but no luck with just my cell phone camera.

I think this is going to be a great new routine for Sheba.  I hope to eventually take the time to drive to the rail trail that runs by the lake in the next town, so she can have a swim there too.  Eventually I hope to run with both her and Cricket at the same time.  Right now Cricket is a little down with a sore back, and she is walking only, but once she is better I hope to get her back out there.  Both girls really seem to like the running, and I think they will enjoy it together!  I am happy because I know it is great for all of us.

As always, many thanks to our blog hop hosts:

Please visit their sites and the other participants through the links below!