I am really enjoying writing for the FitDog Friday blog hops…so I am going to do a short series highlighting the different ways we try to keep each of the dogs fit (along with ourselves), starting with Cricket this week.

I wrote a couple of weeks ago about Cricket putting on a little weight, and our goal to get her back down to where she should be.  Thanks to SlimDoggy’s recent FitDog Friday post I got the idea that stepping up her workout program to something a little more intense would be good for her and for me as well.  They posted about the intensity of exercise and how many more calories can be burned by turning up that intensity.  The point that got me the most too is that you can accomplish much more in a shorter amount of time, and time is always a factor for us.

The week before last Hubby and I were on vacation from work, and we got a lot done around the house.  The dogs got extra walks and ball playing, so it was great for them too.  It was back to work the next Monday and I figured after the routine was already disrupted by vacation, this was a good week to change up the old routine anyway.  The plan was for Cricket and I to start jogging.  The initial goal is to add two jogs per week, on the days that I work from home.  Normally those have been my days to take Kobi for a longer walk.  Kobi is starting to show his age, however, and the longer walks seem to be getting tougher on him.  I decided it was time to change his routine also, and to start doing more frequent, but shorter walks with him (more on him in another post). 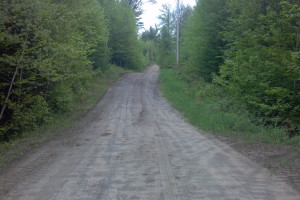 Cricket and I had our first jog that Tuesday morning.  I decided we would start out jogging to the Christmas tree farm which is on a side road down below us (we’ve walked there often).  We are only on our blacktop for a short spell and the side road is dirt with just a handful of houses on it, so very little traffic.  Then it goes into a woodsy area with the tree farm at the end.  It is mostly flat but with some gentle hills, so seemed like a good easy place to start out.  There are some more dirt roads and trails that go off from there, and we can add those when we are ready to increase our distance.

I haven’t jogged for years, I was never really big on it, but from time to time I would do that as my workout.  I used to take Kobi some, but I don’t remember ever taking Cricket.  The plan was to start out slow….a short walk to warm up, then jogging interspersed with walks.  I had to laugh when I first broke into a jog.  Cricket normally pulls to the end of the leash when walking; she is pretty focused and intense about going forward.  When I started jogging she actually slowed down and almost stopped.  I don’t think she knew what to think!  She may have actually looked behind us to see if we were being chased, because I don’t think she could imagine WHY Mommy was running!  She caught on soon enough though, and we got going.  She was pretty good about slowing down or speeding up whenever I would.  We did about a 25 minute jog/walk, which I think was a pretty good start for us.

When we got back to the house I put her inside and took Kobi out for a 15 minute walk, which also served as my cool down time.  Cricket and I were no worse for wear that afternoon.  I did some gardening, and she still wanted to play some ball.  By evening we were pretty pooped out though:

Now, the gods, or fate, or karma, whatever you believe in, were not exactly on my side that week.  The weather was rainy and humid, not the type of weather that inspires me to get outdoors.  Then on Wednesday I started to feel a head cold coming on.  A lot of people at work have been sick with one.  That’s all I needed!  Thursday morning also dawned cloudy and damp.  I did not let any of this deter me, however, and Thursday morning we did the same routine.  We had gotten rained on just a little bit on Tuesday but Thursday was not quite as bad.  We did the same distance, and I think we shaved a little bit off of our time.   I measured the distance we are covering to be 1.2 miles (I know that sounds wimpy, but we’ll get better!).  I’d also like to figure out calories burned, etc. but haven’t done that yet.  The important thing to start with was just to get out there!

Cricket hustled right along with me on the second morning, at first she wanted to stop and smell a few things (luckily she’s not as bad as Kobi when it comes to that), but I got her moving better after a bit.  The sun actually started to come out when Kobi and I did our cool down walk.

As week two of our routine has dawned, I am far less sore, the sun has been shining, and we shave a little bit off our time every time we go out (we are down to 20 minutes for the same distance now).  There is less walking and more running.  Once I can do the whole distance without walking, we will increase it.  I have no doubt Cricket is up for that whenever I am!

A couple things have occurred to me as we’ve gotten started on what I hope will be a new and productive routine, for all of us.  Sheba also got one run this week.  We will add her into the routine, maybe with a weekend run, or maybe I’ll really get ambitious and take both girls at the same time!  Also, we’ve actually inspired my hubby to get involved!  He took his first run this last weekend with Cricket (the rainy weather and head cold got to me so I stayed in all weekend, except for Monday when we took the two boys for a walk).  The only problem is that with his work schedule, the times he can go also fall at the times the dogs usually have their meals.  Which leads me to two questions:

1.  How long after eating is it safe for a dog to run?  We always wait at least a half hour after a meal before we would let them play ball.  I worry more about the larger dogs as I know stomach bloat can be an issue if exercising on a full stomach.

2.  Do dogs need a cool down period after running also?  Should I be taking Cricket as well as Kobi when I do my cool down walk?

If anyone knows the answers, please feel free to share!

I am starting to realize that going beyond just walking or playing ball is a very good thing. Exercising with dogs is fun, and adding variety is good for all of us.   My hubby didn’t even want to consider jogging by himself, though he did once after work;  I think he realizes that getting outdoors and having some company is a great way to exercise.  Maybe he and I will even jog together with the dogs one day….we’ll see.  Hubby has always been in better shape than me, so it’s hard for me to keep up with him!  Cricket, despite her little bit of extra weight, is still very athletic, and she has no such problems.

Many thanks to SlimDoggy, Peggy’s Pet Place, and To Dog With Love for hosting the FitDog Friday blog hop.  Please visit their sites and more through the links below.