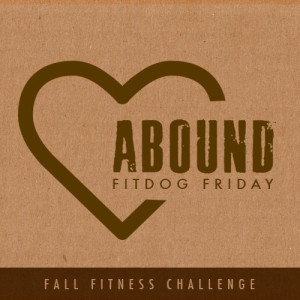 The hosts of the FitDog Friday blog hop, SlimDoggy, To Dog With Love and MyGBGVLife, announced their Fall Fitness Challenge at the beginning of October. We were tied up with #DogWalkingWeek as well as some other things, but we still wanted to join in see what we could come up with. The purpose of this special challenge was to get everyone motivated to stay fit over the holidays by getting out and being active.

Each week following they presented a new challenge:

Week 1: No Grain, No Gain. We had this one covered since we already feed our dogs grain free food! We pay attention to both diet and exercise, and we measure our dogs’ food to be sure they are getting the right amount. We were also getting in extra walks for that first week of October, and have tried to continue to walk more.

By far the dogs’ favorite way to stay fit is by playing fetch in the yard. That is one thing they never get tired of, especially Cricket. They each have their own way of playing the game.

Week 2: Super Food, Super Circuit. Luke already has his own circuit in our yard using what’s already there. When he wants to burn off some energy, he will run his own personal course. I wanted to get some video of him doing it, but I haven’t been able to yet. Sometimes I can get him to run, but mostly he’ll only do it when he feels like it. He has a route that includes weaving in and out of trees (you can see part of the row in the photo above), rounding the big bush in the right photo of the collage below, and running under the deck and then around another bush in the left photo. He continues around the other side of the house and through the posts of that portion of the deck and around the stairs there. His obstacles include some large balls on the ground, or his sisters! He’ll simply leap over all of those things if they are in his path! 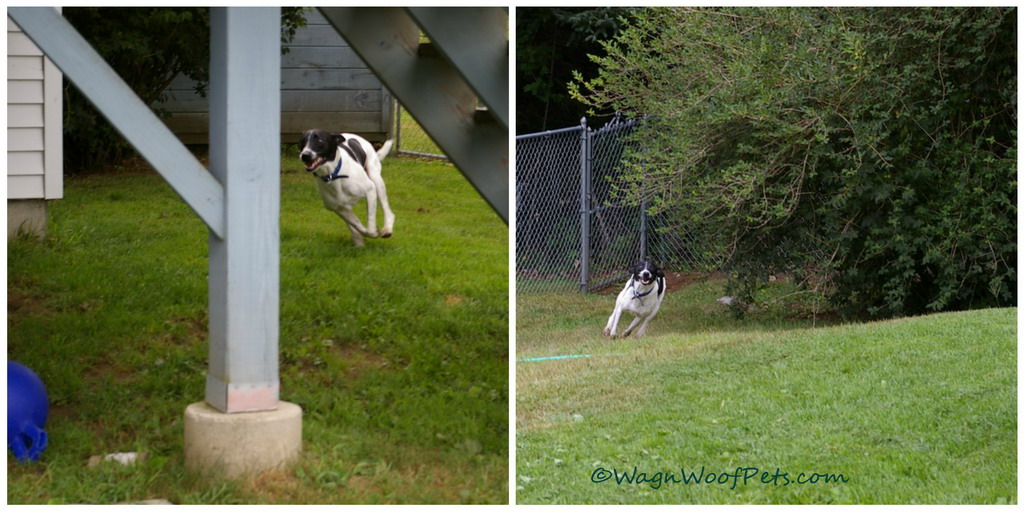 He is fueled by the superfood sweet potato, which is a key ingredient in the food we feed now. Sweet potatoes are rich in amino acids and antioxidants, plus they are high in fiber which is great for the digestion.

Week 3: Sweet and Strong Strength Training. This is something we haven’t worked on a lot with our crew. We do try to add some hills to our walks when possible; this is good to strengthen their back legs. Thanks to the tips from our hosts I got some new ideas of ways we could work on this as well. I do a lot of training with Luke, and one trick I wanted him to learn was “Paws Up”. Putting his paws up on various objects is a great way to strengthen his back legs. He already inadvertently knows the term “Up” meaning to jump up on something, and thanks to target training it was easy to get him to put his paws up on various obstacles.

Inside the house we worked with our *K9FITbone

to help him with balance, and I’ve also been trying to find various things for him to balance on with just his front paws, or even all four paws. Balance works the core muscles and “paws up” strengthens the back legs. We also have a *K9 Fitvest which I have just started using to add a little more resistance to not just these exercises but to his other tricks as well; such as “spin” and jumping up for light switches (we’re still working on both of these tricks). We haven’t added the weights to the vest yet, we are just letting him get used to wearing it at this point. Luke loves wearing things though; so the adjustment won’t take long. 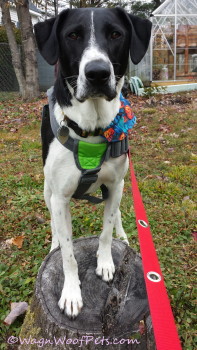 When coming back from a walk recently (see how he is wearing his backpack), we walked around the yard trying to find various objects for him to practice on. We used our bench and several tree stumps around the yard, and practiced with just the paws up, and then with all 4 paws up (I didn’t get any photos of that). 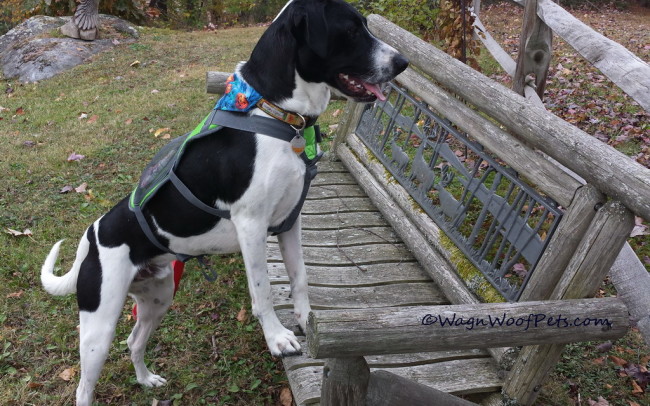 This has added a new dimension to Luke’s trick training, and we are really having fun with it. We’re glad we decided to join in the #FallFitDog Challenge! There’s still a little time for you to join in as well, by sharing a post if you’re a blogger, or anyone can share photos on social media using the hashtag #FallFitDog. Most importantly, they are having a huge giveaway and you can learn more and enter that by clicking here. Hurry, the giveaway ends October 26th!

*Affiliate links. We may receive a small commission if you order through these links, but you will still pay the same price!