When I left off last month’s Positive Pet Training Hop post (“Heel” and More), I told you that I’d been starting to teach Luke to put his toys away. The book I have (Clicking with Your Dog) actually said I should teach him to drop the toys in the box first. The problem is that I couldn’t get him to pick up or take a toy from me! There was no way that dog was putting a toy in his mouth when there were treats nearby. He’s almost too smart…he knew his mouth needed to be free for taking treats!

The original plan had been a two-step process, but I had to reverse the steps (which ultimately made it easier…you’ll see). Pick toys up, and then drop them in a box. Luke already knew his “Give” command, so I figured we were in good shape for step two….but first I had to get him to do the first step! I had consulted the book again for help in getting him to take a toy. The suggestion was to use “shaping” (reward small increments that lead to the desired behavior) to get him to pay attention to and ultimately pick up the toy. They suggested putting peanut butter on the toy to make it more attractive. 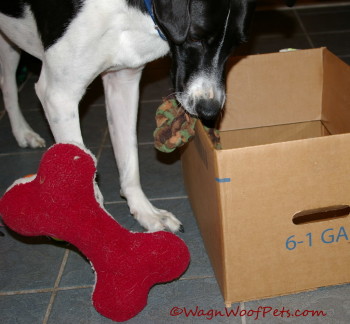 I started with a ball. The plan is to click and treat when he even looks at the toy, then steps toward the toy, and then actually touches it. Shaping is not always easy for me, because sometimes I think I miss subtle moves that should be rewarded. But we get there. I ultimately put coconut oil on the ball, because Luke loves that. But getting him to take the step from licking or nosing the ball to picking it up was HARD, and to be honest, I almost gave up.

But one thing I’ve learned with Luke is that just when I think he’s not getting something, he gets it. I actually switched to a stuffed toy because I thought he might be more likely to pick that up and that’s ultimately what worked. Finally he picked it up, click, treat….but then he wouldn’t do it again. Whenever we couldn’t move forward, we took a step back and ended on a positive note. I could always get him to do his “high fives” or “back up” if we needed to end well. If he even picked that toy up once, we would end there. Then the next session, he would seem to remember that, and the next time he’d do it right off, so we ultimately got there! Once he had it down, I added the vocal command “pick up”. I also point at the toy, since he responds well to visual commands as well.

One thing I noticed as we practiced was that he would pick the toy up and pretty quickly toss it aside, knowing his treat was coming. So I used this, and instead of using his “give” command to get to step two, dropping it in a box, I just put the box right next to him and the toy and we went through the same process. If he even touched the box with the toy before dropping it, click, treat, until eventually he had to drop it in the box before he’d get a click and treat. This step went more quickly than the previous. We moved the toys further away from the box, and practiced. 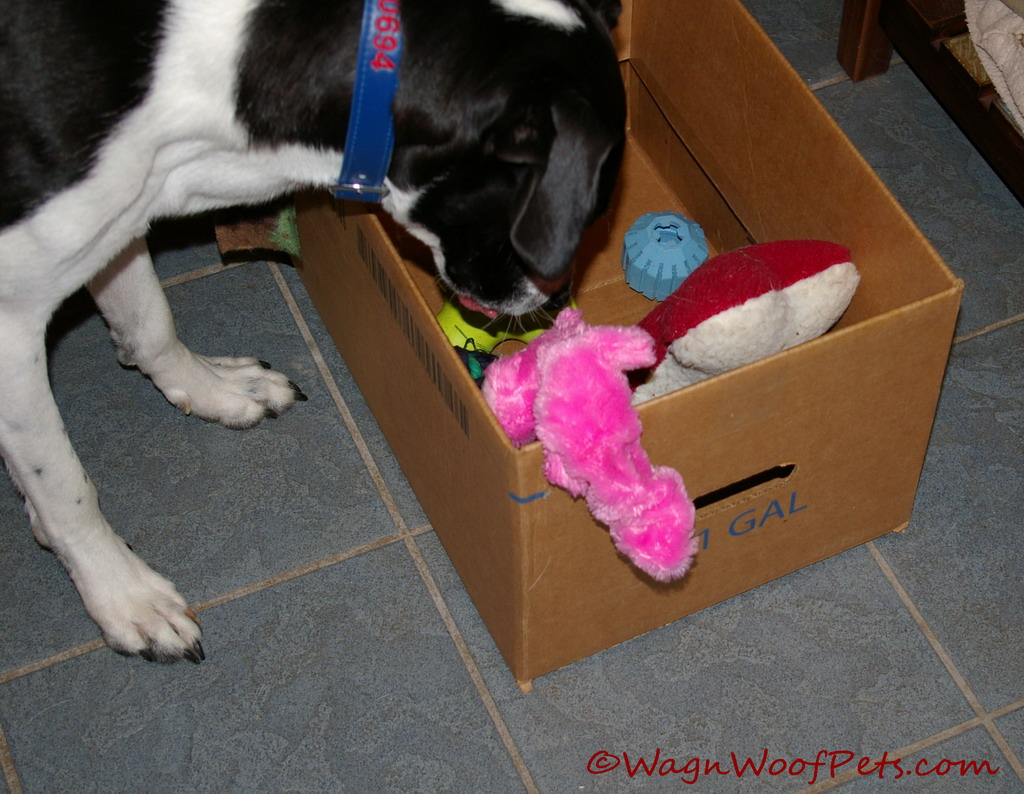 I used a large box to start, and then tried smaller boxes and started adding more toys to the mix.  I knew that Luke was good at “generalizing”. In other words, even though he trained to a certain training location, toys, and box, I knew he could transfer that trick to another location, his actual toy box, and different toys. I had seen this when we trained him to close doors. We rarely worked anywhere but with the kitchen cabinets for that trick. Weeks after we had done that training, I took him in the bathroom, set the door halfway closed, and told him to close it. At first he re-opened it all the way. But just as he had learned in the kitchen, he went around the backside of the door and then closed it all the way! I had not taught him to do that with anything other than cabinet doors! 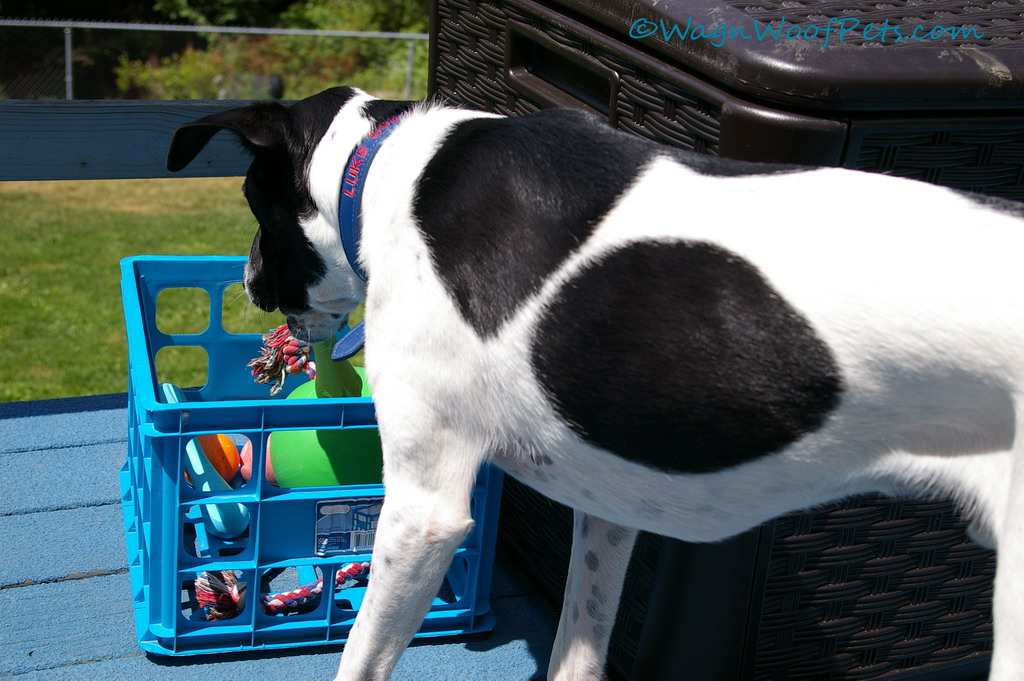 Not only will he do this upstairs with his toy box now, I can take him outside on the deck and he will put toys away there as well. We are still working on this trick. We have mostly let the clicker go…sometimes he starts out distracted and I’ll click for the first couple, and then put it down. I’ve started sometimes only treating him after he’s put 2 or 3 toys away. My ultimate goal is to get him to put all the toys away before expecting a treat. In the video I’m sharing below you’ll see that I have to give him the command for each toy and often point to it or direct him to it. I hope eventually I won’t have to do that every time either. But right now, he needs me standing there directing him most of the time. So it’s still a work in progress, but we’re having fun, and I hope you can see that in the video. It’s a bit longer than some, showing two different rounds of picking up several toys. I’m so proud of how well he’s doing!

The theme for this month’s Positive Pet Training hop is “improving our pet training skills”. Every time Luke and I learn a new trick, I think my skills improve. I’m learning to read him better and know what to expect. Most importantly, I am learning not to give up on him, and to do things differently if one way isn’t working. A few months ago we tried “roll over”, he didn’t get it, and I ultimately gave up and moved on to something else. I think it’s time to re-visit that one and see what happens!