A few months ago I wrote about walking our beagle, Kobi.  If you’ve read that or some of my other posts, you might know that we have four dogs, but that Kobi is the only one I walk on a regular basis.  The two golden retrievers and our younger beagle, Cricket, get most of their exercise by playing ball in our big fenced in yard.

I’ve been trying to rack up minutes for the Idita-Walk.  Kobi had surgery last week and has still been healing so I haven’t walked him since then.  This last weekend I needed to get some minutes so decided to take two of the other dogs, one on each day.

On Saturday I had taken Sheba on the rail trail just below our street, so on Sunday decided to drive to the next town and walk the same trail along Mascoma Lake, and take Cricket.  Our rail trail is great – we have miles of trails converted from the old railroad beds into trails for snowmobiling in the winter, and walking, biking, or horseback riding in the other seasons.  It travels and connects through several towns in our area. 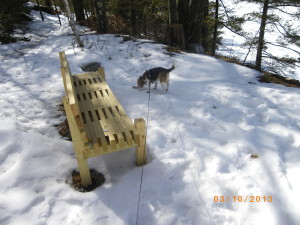 Cricket’s walking technique is quite different from Kobi’s stop-and-smell-everything routine.  She puts her head down, and goes into four paw drive.  And I mean she GOES.  She certainly gives me a good workout.  She will occasionally stop to smell something, or to take a bathroom break, but other than she just plows forward.  Walking is serious business to her and she gets down to it.  I was lucky she slowed down enough so I could take some photos.

It was a beautiful day last Sunday, sunny with the promise of the oncoming spring in the air.  The temperature was in the 40’s.  I certainly expected to see other people out on the trail.  It’s quieter in my town but by the lake is a more popular stretch.  We soon ran into a big group of older couples who were walking along, laughing and taking photographs.  Cricket can be a little shy of people so I always rein her in when approaching anyone.  Of course, they all wanted to see the cute little beagle.  They were obviously people who knew dogs though, as no one rushed in to pet her immediately, they approached cautiously and just put their hand out to see if she would approach.  As she does with strangers in our home, she’ll go in for a quick sniff and then back off and bark.  She repeats that routine, but usually settles down and lets people approach her.  Never a snarl or growl, but she’ll soon let me know she wants to move on, so we do.

The next encounter doesn’t go so well.  There are two women with two dogs, a large mixed breed and a smaller Shih-tzu looking dog.  Neither of the dogs were on leashes.  Cricket is always on leash, because my experience with hound dogs is that they will follow their nose given the chance, and I won’t risk her running away following some scent.  I really didn’t think much of it, because Cricket has never had a problem meeting another dog.  For some reason this time when the dogs approach her she does the opposite of what I expect, and starts barking, snarling and growling, pulling at the leash.  As always I have reined her in anyway, so I am able to pull her away.  The other good thing is that neither of those dogs were looking for a fight, they retreated (their people called them to them also), and I quickly apologized and moved on, dragging the crazed beagle with me.

My thought about this surprising behavior from her is that she was upset because those dogs weren’t leashed and she was.  They could retreat, but she didn’t have that option if she needed it.  I am pretty sure we have encountered people and dogs walking before, and she never had a problem.  Most likely those other dogs were also leashed, and the only other difference would be that usually when she is walked we have Kobi with us also.

The only bad thing about our rail trail in this situation is that chances are if you pass someone once, when you turn around to go back, you will probably pass them again.  There are no round trips on this trail.  Sure enough, we encountered these people again, and the dogs were still loose.  I yelled ahead a little and asked them to just hold their dogs and I would get by with her quickly.  The younger woman got the large dog to her and held him.  The older woman called the smaller dog in and I thought would hold on to him but she didn’t.  The dog ran towards us and Cricket went ballistic again.  This time the little dog also retreated and I hauled Cricket off as quickly as I could.

I don’t like to complain about people and their dogs.   I haven’t always been the best dog person, I have had to learn as I go along.  I’ve made mistakes.   I certainly don’t have a problem with people walking their dogs loose if they are well behaved (and these two really were), even though there is a leash law in that town and it is a public trail.  I’ve had dogs in the past that I walked loose.  However, I always had a leash with me and usually leashed my dog when approaching others.  Is it too much to expect that people at least use common sense?  They saw how Cricket was when they passed us the first time, wouldn’t you think they would have at least held onto both of their dogs when they passed us again, or put them on a leash if they had one (at least the one woman did)?  It seems to me they should have been concerned about the safety of their own dogs too!

I am concerned that Cricket behaved this way.  I know that 3 out of 4 of our dogs lead pretty sheltered lives.  That was the one thing I didn’t anticipate when getting multiple dogs….that training would be more difficult, because finding one on one time is a challenge when you have that many.  I don’t walk the three dogs that much because frankly, as much as they enjoy walking, they enjoy being at home too.  My hubby and I are homebodies.  They love to play ball.  I walk Kobi because he needs that exercise (doesn’t hurt me either).  We walk the Goldens in the summer sometimes so we can take them swimming.  The three also don’t care much for riding in the car, so keeping them at home mostly seems to keep everyone happy.

I am also questioning if those women thought I was in the wrong there, because my dog did not behave properly.  Or were they wrong to not have their dogs on leashes, especially the second time we passed them?  I am not even 100% sure if the fact that they were loose is why Cricket reacted the way she did.  Though my hubby agreed that was probably the case.  Cricket does, however, have an attitude.  I believe sometimes small dogs try to make up for their size with big attitude.  Cricket has been known to get into it with her siblings.

My question is have we done our dogs a disservice by not socializing them better, or is it okay if they mostly just stay at home anyway?   I certainly won’t walk Cricket on that stretch of trail again, I can keep her closer to home on the trail where we don’t usually see many other dogs or people.  Kobi should also be healed up enough by next week to walk with me the rest of the time I complete my Idita-Walk minutes.  If I want to walk her in the future, however, I need to get to the bottom of this behavior.  Is Cricket a dog that is considered “reactive”?  I have read some on other blogs about reactive dogs, but don’t really know a lot about it.  Once again, my dogs are challenging me.  Just when we think we have most things figured out, I am back on the computer reading and researching, trying to find answers and solutions.  If anyone has any thoughts or advice, it would be greatly appreciated!