….Is a little common sense.  Sometimes that seems like too much to ask. 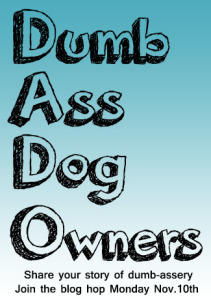 We are joining the DADO blog hop hosted by Heart Like a Dog and Tales from the Backroad.  Join the hop and share your experience of dealing with one of these dog owners, many of who have no common sense.

I first found out that our beagle Cricket was leash reactive because of people like this.  It was two springs ago when I was walking her on the rail trail one town over from us (which happens to be the town I grew up in), along the beautiful lake.  It was a favorite place to walk our beagle Kobi but this time I only had Cricket.  I previously wrote about this in a post titled “Walking the Other Beagle” that March (early on in my blogging career so not many saw it!).

We encountered two women with two dogs, a large mixed breed and a smaller Shih-tzu looking dog.  Neither of the dogs were on leashes, Cricket is always on leash.  I really didn’t think much of it, because Cricket has never had a problem meeting another dog.  For some reason this time when the dogs approached her she did the opposite of what I expected, and started barking, snarling and growling, pulling at the leash.  I keep her on a short leash when approaching people, so I was able to pull her away.  The other good thing is that neither of those dogs were looking for a fight, they retreated (their people called them to them also), and I quickly apologized and moved on, dragging the crazed beagle with me.

Now I could cut these women some slack, if it wasn’t for this…..

The only bad thing about our rail trail in this situation is that chances are if you pass someone once, when you turn around to go back, you will probably pass them again.  There are no round trips on this trail.  Sure enough, we encountered this group again, and the dogs were still loose (I’m not sure they even had leashes with them).  I yelled ahead a little and asked them to just hold their dogs while I got by with her quickly.  The younger woman got the large dog to her and held him.  The older woman called the smaller dog in and I thought would hold on to him but she didn’t.  I don’t know what she did, but again the dog ran towards us and Cricket went off.  Luckily, the dog was smarter than its owner, because it retreated and I hauled Cricket off as quickly as I could.

Really?  My dog wants to beat your dog up, and you’re going to let it run towards us again?  Common sense, people, that’s all we ask!

That is a beautiful stretch of rail trail but now that Kobi is gone, I don’t walk it much.  I did take Sheba there, because she’s my only dog that I can count on to be friendly in every situation.  The last time I took her there, we weren’t on the trail for two minutes before we encountered a man with two small dogs off leash.  By the way, there is a leash law in that town, but apparently many people don’t feel obligated to comply.  Luckily there are plenty of other places to pick up the rail trail and walk, though I do miss the pretty scenery by the lake sometimes.  Unfortunately, sometimes the best way to deal with a DADO is to avoid them, if you can.  My thought is that you can’t teach common sense.