More Adventures on the Farm!

On a recent afternoon, I sat at my computer by the dining room window watching some of the chickens and guinea hens scratching around the yard. I got up to do something else before heading outside to check for eggs in the coop again.

I was alarmed when I got outside to find all the guinea hens on the porch squawking frantically, and all the chickens, just a portion of our flock that had been there, nowhere to be seen. My stomach was in knots as I searched for the chickens. I just knew by the guineas behavior that something was wrong, and previous events contributed to my worry.

You see, just the previous day, some of the chickens had gone missing. One thing I don’t like about the cold weather is that we’re inside more, the windows are closed, and I can’t keep as close tabs on the birds. With windows open I can better hear where they are.

That day I headed outside because I hadn’t seen many of them for a bit. The guineas were right around and so were our 4 Rhode Island Reds. But the other 2/3 of the chicken flock were missing. I walked up and down the road and along the perimeter of the yard, and never could find them. My hubby was at work, so I decided if they didn’t show up, when he got home we’d both go looking.

Not long after I looked out the window to see those 8 hens marching along the dog yard fence, headed to the front of the house. I opened the door and yelled “Where have you been?!”. Just like the rest of the crew around here, no one was telling.

The next day my hubby was home and once again those same chickens disappeared. This time hubby was out working in the yard, and usually the girls like to stick close to us when we’re outside, and nose in on whatever we’re doing.

After a bit, I asked him if he’d seen them and he hadn’t, so he went looking. When he came back a while later, he let me know that those birds were up at our neighbor’s house! As if that’s not bad enough, our neighbor told him that she had seen a hawk take a dive at them, but luckily only came away with a couple tail feathers. The girls were now hiding around our neighbor’s property, under bushes and in her shed. He decided to leave them there and let them chill out for a bit.

Now we’re back to where I started….when I was sitting at the table watching them that next day, I noticed that three of the girls had come home from the neighbors. I knew exactly how many that were there, and when I did finally go outside and find the guineas upset, I started to look around and found just 3 chickens hiding under the bush next to the porch.

The guinea hens did not let up their squawking like they often do when I speak to them, and that was why I was sure something was wrong. I went in to wake my hubby from his nap, and he came outside to try to help find the rest of the flock.

All we could figure was that hawk must have found its way to our house and taken another dive at the chickens, even though I never saw or heard anything, and that sent the girls in to hiding and put the guineas on high alert. We didn’t see any signs of extra feathers or anything else to indicate anyone had been attacked (there’s always feathers around the yard, so we couldn’t be 100% sure though!).

Hubby headed up to the neighbors to see if any of the birds were still there. He had a bag of their favorite treats, dried mealworms*, and was able to lure them home with those – 5 birds, so we were still missing 4. Eventually 2 showed back up, and we found 2 more hiding in one of our brush piles. We tried to get everyone in the coop with the worms, but they were too nervous still to cooperate with that (just like a scared dog who won’t take a treat). We did more than one head count to be sure we had everyone back around. We had been outside for quite a while, and never saw any sign of a hawk or anything else, so we decided to open the coop and let the ones we had gotten in back out. It was getting close to dusk by then anyway, when they’d all go in on their own.

I feel pretty sure that our guinea hens did their job, and scared that hawk away! After all, they were standing out in the open even though the hens had scattered to hide, and that hawk never came back to take a swipe at them. (We also feel hopeful that this was just a migrating hawk passing through).

Something else good came out of this, other than learning that our guineas truly are the watch dogs we were told they would be. Since that day, over a week ago, all the hens have stayed closer to home, and for the most part, they are all sticking together too.

I guess they’ve realized that there’s safety in numbers, and maybe also that sticking around their home with the guinea hens on watch might be a good idea as well. They’ve all been spending more time under and around the porch and in the barn and garage too. I hope they continue to remember that home is not only where the heart is, but often the safest place to be. 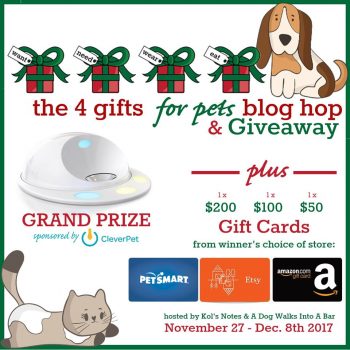 Don’t forget about our huge 4 Gifts for Pets giveaway! Click here to learn more and enter.