The theme for this month’s Positive Pet Training blog hop is “Calming & Impulse Control – How do you get your dog to settle down?“ Is your dog sometimes over-stimulated by fear or excitement? How do you get them to relax? 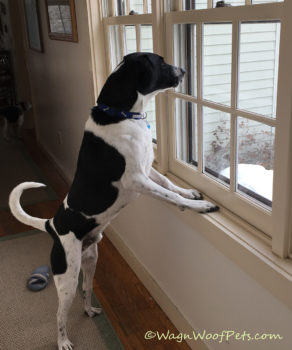 We struggle with this every day. Luke gets over-excited about a lot of things, including watching TV. If an animal shows up on TV, or even people acting obnoxiously, he barks and jumps around at the TV.

If a car goes by the house, or heaven forbid, pulls in our driveway, he is at the window barking. There are certain vehicles that set him off, including any delivery truck. He knows if they stop that someone will be coming up to the door.

We’ve been working on getting him to calm down for a while, but I’m trying to get more serious and consistent with it.  I am OK if he sees someone pull in the yard and barks. Cricket often joins him in the barking, but the difference is that Cricket will stop when I tell her to. He won’t; and he’ll run back and forth window to window as long as anyone is out there. He’s fairly used to the workers we’ve had cutting trees and removing logs and brush recently. If they stay a good distance from the house he’s fine, his motivation in this situation is fear of strangers coming into the house.

This is one of the main reasons I decided to take the online Reactive Dog Management class at Fenzi Dog Sports Academy. I was hoping to learn some new tools for this situation as well as being able to have him under control if we go for walks and encounter other people.

I’ve enjoyed this class because it’s utilized a lot of the tools and tricks I had already been working on, but showed me different ways to use those tools to distract Luke from whatever is bothering him. Distraction is key to settling him down.

I’d already been working on getting Luke to go to his “bed” when he’s seen something outside that he’s reacted to. I have Cricket doing it with him as well now. Cricket won’t stay in her bed very well, but Luke will lie right down. I grab treats and reward them for staying there (or in Cricket’s case, the general vicinity).

We’re making progress but we have far to go. I am still waiting for that breakthrough, where he comes to me or goes directly to his bed after seeing someone outside. We’re not there yet, but we are to the point where I can call him to me and direct him to his bed. He will stay there most times. I have him to the point where he will stay on his bed while I walk away and go to the window to see if whoever was out there is gone. That’s even with Cricket following me much of the time!

I did realize that if I sent him to his bed at another time, he’d go running to the window because he thought someone was here. He was making that connection, so I had to start sending him to his bed at other times too, like any time I’m giving them a treat for another reason. Now if he can just make the connection I need him to!

The class has taught me some ways to continue to reinforce this “go to your bed (and stay)” command. Those include: working with Cricket while he stays in his bed, having him perform other tasks or tricks then going to his bed, and having food in my hand right in front of him, but not giving it to him until he goes to his bed. I’m starting to try this some now too when he reacts to the TV.

Luke’s focus is very strong. He can often miss something right in front of him if he’s focused on smelling something. Once I have him focused on me, most times he will not run back to the window when someone is still out there. The key we’re still working on is breaking the focus and redirecting it to me when he sees someone outside (or on the TV). Sometimes I can get him but others I can’t. It’s the same way when we work out in the yard on distracting him. Some days he’s great, some days I just can’t get him off what he’s reacting to.

I try to work on this every time there is someone outside; but there are times when I’m in the middle of something and I can’t get right to him, or I’m on the couch when one of those commercials comes on. Those are usually the times I can’t get him – I need to grab his attention before he gets overly excited; and that seems to be our biggest challenge.

We’ve had some successes lately though. One day last week one of the workers was right up to the dog fence talking to the Dadz outside. Luke was out there right at the fence barking at him. It took me a minute, but I did finally get him to come to me in the house.

When practicing the other day, I put Cricket in the bedroom for a bit. Before we finished, I put Luke in a stay on his bed, walked down the hallway (which is fairly long), opened the gate (which makes noise) to let Cricket out, and when Cricket and I walked back we found him still in his bed. The truth is I’ve never had a dog that stayed that well. I just hope we can reinforce and use that good behavior in all of the ways we need to.