Most dog people know that routine is important for dogs.  Changes to routine can cause stress, leading to behavior and other problems.  However, I think there is also positive routine change, such as what we had in our household this week, when hubby and I were on vacation.  Perhaps I should call it “staycation” since we didn’t actually go anywhere!  We usually take off at least one week per year to spend just doing projects around the house, and just being home with the pets, which is great.

No matter whether we’re home or working, we usually manage to have consistent feeding times, and my hubby still gets up at 5am every day with the dogs even when he is not working.  I stay home two days in the workweek anyway, so the dogs are accustomed to two different routines during the week.  They come back to bed with me after breakfast when Dad goes off to work.  When we both work, they get their treats and then settle in the office, which doubles as the “dog room”.

We did have some different things going on this week which could have disrupted the dogs normal quiet life though, but I am so pleased to say that they handled everything very well!  The first day of our vacation we participated in a “Town-Wide Yard Sale” that our town holds twice every year.  My sisters bring some of their “old junk” over too and it gives us time to just visit while making a little bit of money, and cleaning old stuff out of our homes!  So there was traffic and people going in and out of our yard all day, which is definitely not the norm at our house!  It was a rainy day off and on this year, so we had to set up all of our stuff in the garage.  I don’t think the dogs barked once, which totally amazed me.  They showed their cute faces at the glass door to our house, and people enjoyed seeing them.  We had a spell of sunshine and I brought Kobi outside and let him sit with us for a while and greet people.  (He couldn’t understand why no one brought him treats, however).

The only incident we had was when I went in the house and let the dogs outside for a break in-between the rain showers.  We have a fenced in yard, and in the morning hubby and I had been moving some tables and chairs out of that yard where they were stored under the deck.  We very stupidly left the gate open and I can’t believe we never noticed it!  So while I was still in the house, apparently Cricket went wandering out of the fenced in area and into the garage, taking everyone by surprise!  Thank goodness that was as far as she went, and the other 3 dogs never even noticed the gate was open.  Disaster averted and lesson learned. 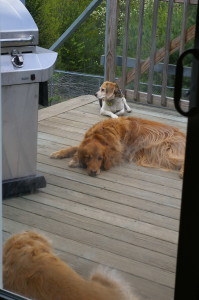 We had a normal day on Sunday, hubby and I puttering around the house, and of course the dogs got lots of ball playing in that afternoon.  Monday morning we were starting our painting projects.  We had the kitchen and dining room to paint, and this meant moving appliances around and having a ladder in the house.  Sheba and Moses hate when things are out of place.  The kitchen is their route from my office where they mostly hang out, and they hate maneuvering around different things.  Our weather had taken a turn for the worse again, Spring backtracked to early Spring, and the temperatures outside were only in the low 50’s at best, and cloudy.  But the whole time we were painting, Sheba and Moses just laid out on the deck sleeping.  Cricket went in and out a few times at first, but once she figured out we weren’t going to be playing ball, she went back in the office and slept.  Nothing perturbs Kobi, so he was laying right out in the kitchen with us, on the dropcloths and under the ladder…..no superstitions for that dog!

We threw the ball a little bit later in the day when we were just putting things back together.  On day two of painting, the dogs were more rested and Cricket kept bringing the ball to the door in hopes that I would throw it.  I gave in and threw it a little bit when I had to get on and off the ladder anyway with the painting.  She was mostly patient in-between throws.  The rest of the week was just like one long weekend….there were some walks and more ball playing.  Hubby and I were in and out sometimes running errands, etc., we also worked in the yard, gardens, and my greenhouse, but the pets still got much more time and attention than they normally do during a workweek.

I was just very impressed that the dogs behaved so well through the different little changes in our routine.  I don’t know if it’s because they are older now, but in the past they haven’t always been that well behaved and patient!  Overall, I know they love having us home, even though they seem a little more tired in the mornings.  After breakfast they go back to bed and have no problem just hanging out with us while we drink our coffee and watch the morning news.  Eventually Cricket will always go find a ball and see if we’ll throw it, but if we’re busy and can’t at the time, she’ll accept that and go back and lay down, or just wander around the yard or lay in the sun.  Kobi is usually laying at my feet, or following me around, and Sheba and Moses are either in the house or out on the deck in the cooler air.

Sometimes I think the disrupted routine is harder on me than it is on them.  I am just as routine oriented as any dog, and as much as I hate going back to work, I sometimes need that structure or I just don’t get anything accomplished!  But I’d much rather be home with the pets all the time if I could.  And of course, the dogs love having us home too (the cats do also but that’s just so they can try and get fed numerous times during the day!, and maybe a little extra patting). Though I sometimes think that come Monday morning, the dogs will be thinking “thank goodness they are leaving, now we can catch up on our sleep!”.