The video I shared yesterday of Luke playing with his monkey toy got me thinking a little bit. It’s easy for me to say that we spend a fortune on stuffed toys that just get destroyed around here. While getting some freebies is one of the joys of being a pet blogger, I do still buy quite a few toys for the crew.

However, in spite of destruction, the toys really do last a long time. Even though Luke and Sheba both might go “straight for the heart” of their toys, and by “heart” I mean “squeaker”, that is not normally the end for them. In fact, Cricket will rarely even pick up a stuffed toy unless the “gutting” of it has already been begun by her siblings.

Cricket doesn’t enjoy the destruction, starting the holes and then removing the squeaker (and I try to get to that squeaker before they can, especially if they are the small ones). She does enjoy the de-stuffing part though. Even when the stuffing has all been pulled out, the carcasses that are left over are often her favorites. I’m not sure what that says about her as a dog!

Take, for instance, the Blue Suede shoe toy which came in our Pet Treater box back in September. It has long since been destroyed and de-stuffed – Sheba was seen in action doing that in this post – and you can see in the photo below that even half of it is gone. Yet, that’s the toy that Cricket will often drag to bed on a weekend morning, and the snarling and growling at her siblings will ensue (all in fun) because everyone wants the toy she has, even though it’s now a stuffless shell of a toy, and half gone to boot.

Once in a while I’ll even throw some of the carcasses in the washing machine (though probably the smell of them is part of the attraction!), or sneak one that’s in really rough shape into the trash when they’re not looking. When I’m not looking, they’ll sneak one outside and if it ends up in the rain and mud, I’ll throw it out eventually. But for the most part, these toys are around for a long time, and we have a toy box full of the “remains”.

The real thing that keeps me spending money is the fact that this time of year Luke starts to get bored in the evenings, and nothing but a new toy will stop his whining (honestly, I try to ignore him, but it’s HARD. And then I blame myself thinking I didn’t do enough with him that day).  Even when I hide some in another room and try to pass them off as new, he doesn’t fall for it. Plus, if a new toy comes and I try to stash it away for later, and he sees me do it? He does not forget, and he’ll go right to the door or cabinet where he knows I put it.

So I’ll continue to spend money, but I won’t try to claim that toys don’t live long around here. They’re just kind of “crippled”, which I guess just makes them the perfect Christmas toys – they’d fit right in on that Island of Misfit Toys seen on Rudolph. 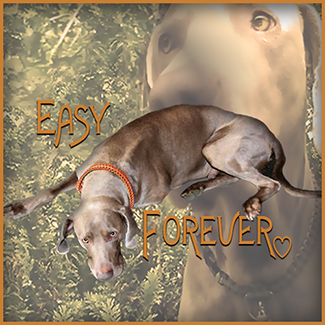 This post is lovingly dedicated to our late blog friend Easy Rider, who was well known for the “snowstorms” he created when destroying toys in record time. Easy Weimaraner tragically passed away this last week due to complications from bloat. He was too young, and his parents are understandably devastated. Easy was a “rock star” in the pet blogging community. His antics and those of his family were hilarious. Every time “he” left a comment on this blog, it would bring a smile or a laugh. He will be greatly missed by all who knew him. He may have lived an ocean away, but he was close to all our hearts, as are his parents.

For bloggers that knew Easy, I wanted to mention in case you didn’t know, that there is a fundraiser going on for his family to help with the ER vet bills that were not covered by insurance. You can visit the Idaho Pugs by clicking here to learn more.

Condolences can be left on Easy’s blog. RIP big guy. Luke is going to miss his “partner in crime”.