I had moved back to Massachusetts and lived with my sister for a few months, then got my own apartment for a short time, where it was just me and my cat Concha (See Part 3).  After that we moved in with friends.  Billy and Colleen had cats as well. 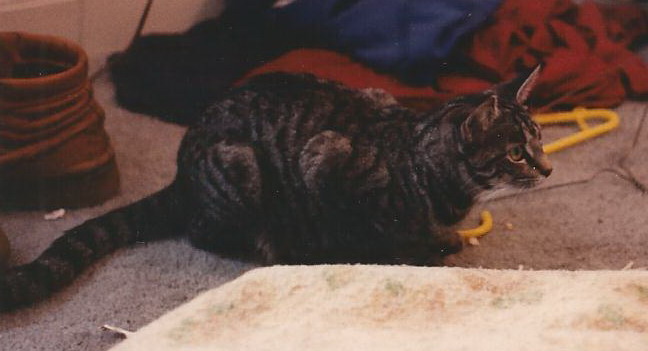 This beautiful tiger cat was named Ragu.  She began my obsession with tiger cats.  I was completely in love with her, and Billy and Colleen knew it.  They were so sweet and they gave her to me as a gift. 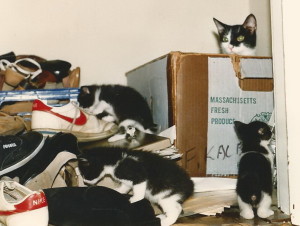 They also had a black and white cat, I cannot remember her name.  She had a litter of kittens, and one of our other roommates, Bob, kept the little black one (on far left in photo below).  He named him Blackie, of all things!  I think I became the unofficial mother to all the cats….when Bob moved out, he also left Blackie with me and my boyfriend. 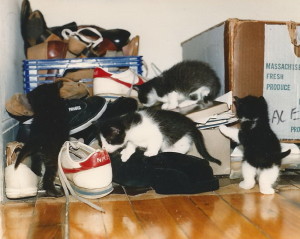 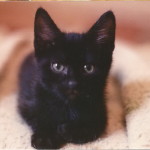 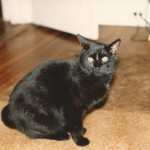 Above:  Blackie as a kitten and then growing up.

Ragu had one litter of kittens.  We were always good at finding homes for kittens.  But I had fallen in love with my second tiger cat, the runt of the litter.  However, one day I got home from work and found out that one of my well meaning roommates had found a home for the little runt….he had not realized we had planned to keep her!  Luckily, she had only gone as far as across the street.  I ran right over there and the neighbor was very understanding, so willingly let me take her back, and took another kitten instead.  That little runt got named “Bones” in honor of her scrawniness.  She was a feisty little one though….she was the first to climb out of the box. 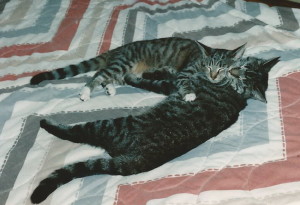 Bones went into heat and we naively thought we could just keep her in the house so she wouldn’t get pregnant.  We were diligent about keeping her in.   I have never forgotten the morning I got up and opened the front door to find her sitting on the doorstep.  To this day, we have no idea how she got out of the house!

My boyfriend (now my husband) and I moved into our own apartment finally, no more roommates!  All these cats came with us (minus the kittens who all went to good homes), and in Part VII I will have more photos of them and some additional feline family members also.  If you’ve been following this series, by now you must think I am the crazy cat lady.  🙂