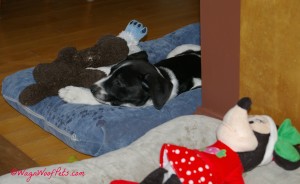 Overall, I have to tell you that Luke has been a really good puppy.  Even our company last night was impressed!  My stepson and his wife and our 2 year old grandson came to visit and spend the night yesterday.  My sisters and their hubby & boyfriend came over for dinner also.  Luke was on the loose for a while, until William’s little toys came out and he started to steal those.  So my hubby took Luke and the girls outside and let them run around for a while.  Yes, the girls were out there running around with him and playing!  They are still not totally in love with him all the time, but they are coming around.  Luke was pretty worn out (it was snowing at the time and we already had several inches), so with a couple treats he went right into his crate and was napping in no time.

After dinner we headed downstairs to open William’s Christmas presents, and Luke stayed up in his crate and never made a peep.  I felt bad for him being alone though so I went up and got him and brought him down with everyone.  This is what he ended up doing: 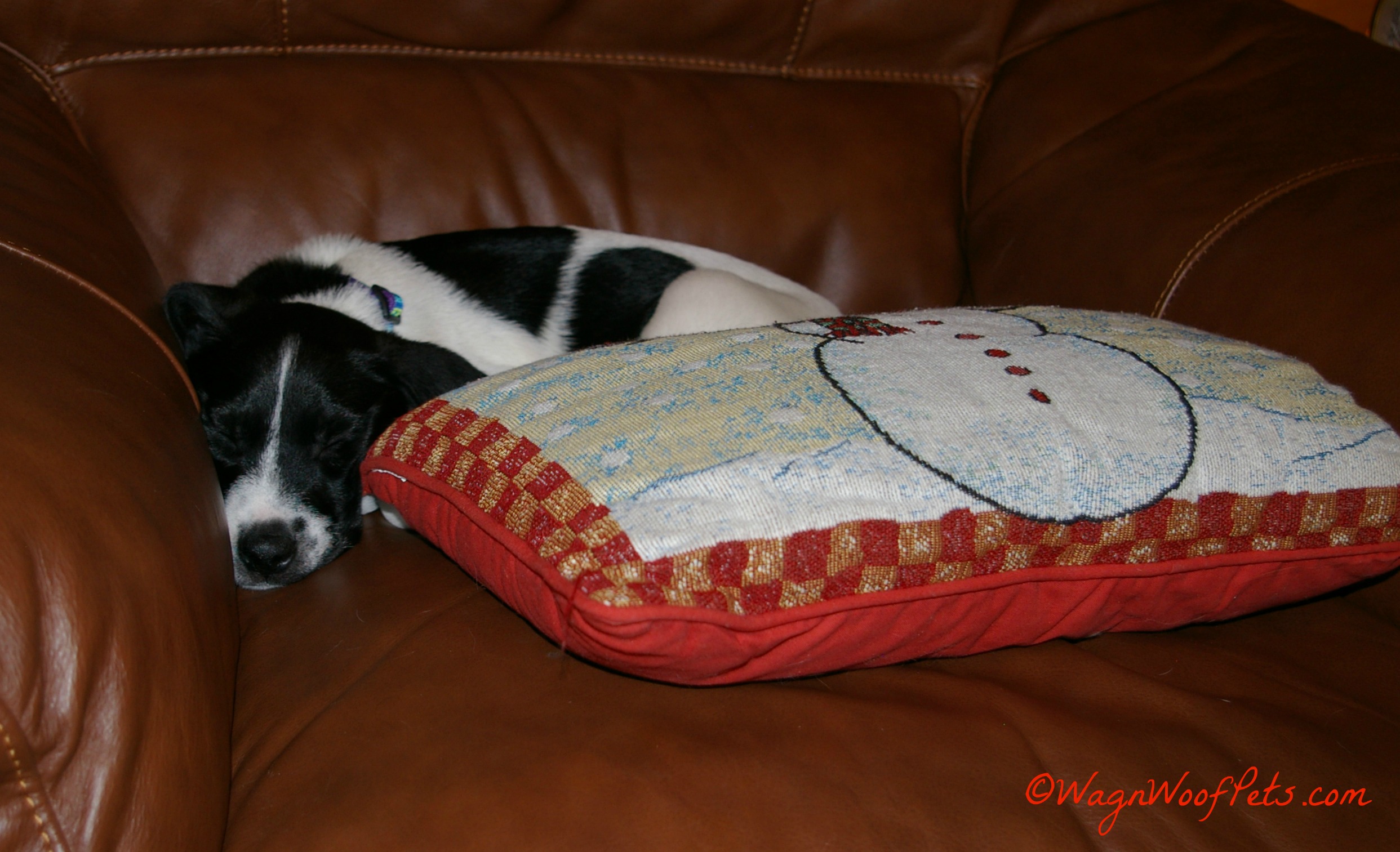 He has been sleeping through the night in his crate.  We are up early, so the nights aren’t super long, but still, we did not expect this.  The crate is working great for us and him.  This is our first time really using one.  We had tried it with Cricket and she just would not stop whining, and she wore us down.  Granted, we know a little better how to do it 9 years later, but I think it’s more Luke’s personality.  From his first night here, he went in fairly willingly, only whined for a couple of minutes and then went to sleep. 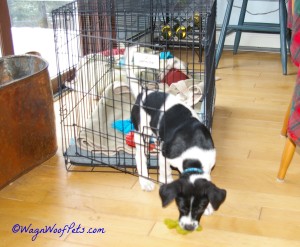 We use the crate during the day for his naps, and he always gets a little kibble in a kong or some small treats when we put him in.  He has lots of toys in there.  It has really become his space and he’s happy in there.  It also gives the other dogs a break from him, and we can get things done without worrying that he might wake up and get into something.

He and the other dogs are starting to understand each other better.  The cats, not so much, but they know where they can go to get away from him.  In the picture below you can see that Conrad is not afraid to put Luke in his place, even when the poor little guy isn’t doing anything to bother him! 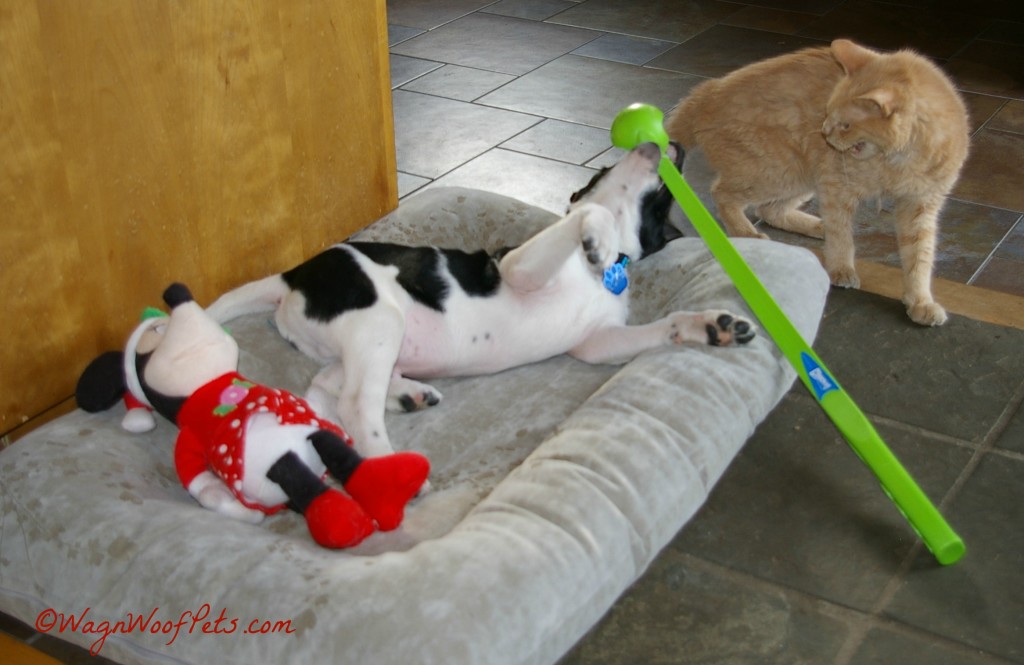 You can also see that it doesn’t phase Luke all that much!  And don’t worry, we keep an eye on things and intervene when needed.  Below you can see he and Sheba hanging out and playing with toys together. 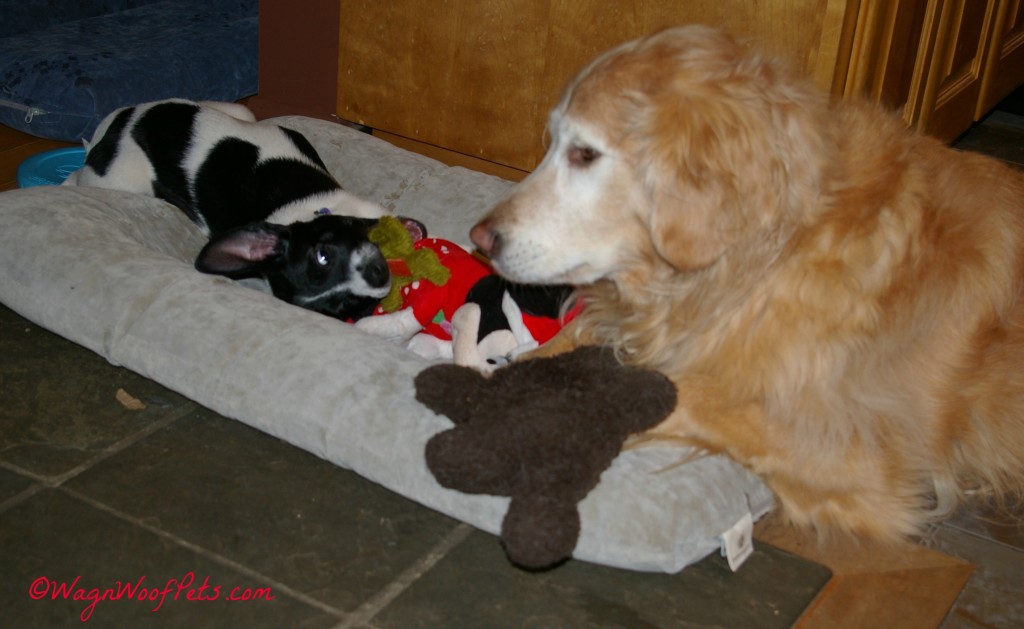 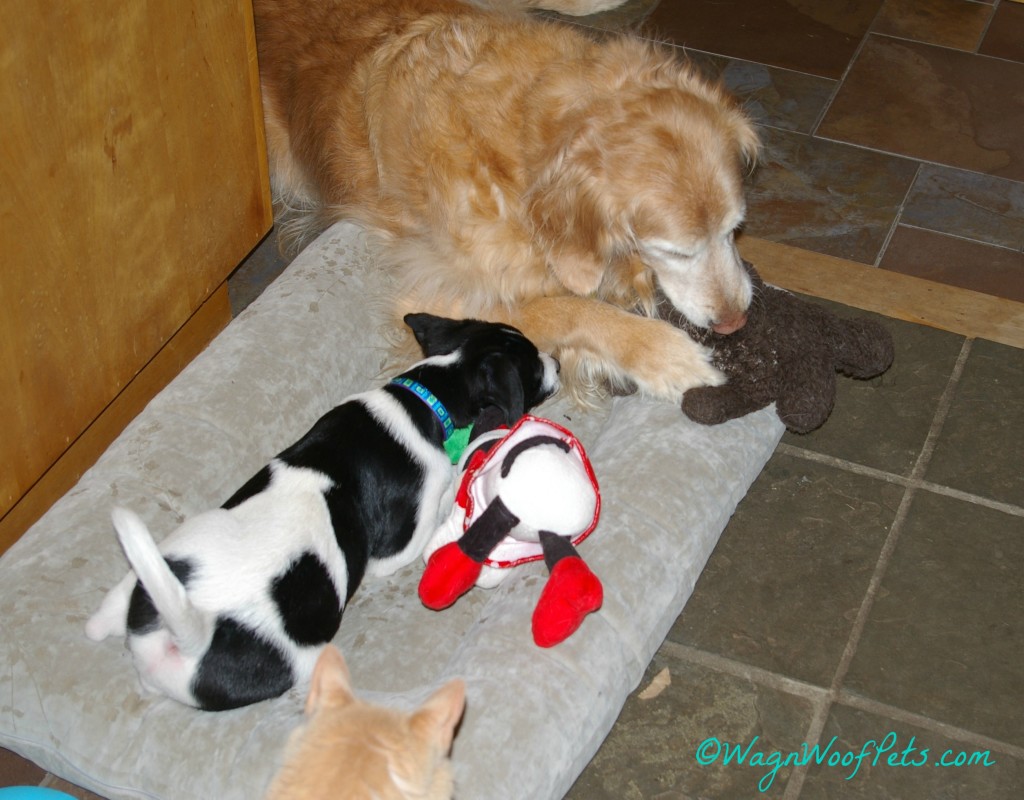 Now that I’m done bragging on what a good boy he is (knock wood of course), it’s time for the mischief.  So far it’s pretty standard puppy mischief.  Anything within reach can be turned into a toy! 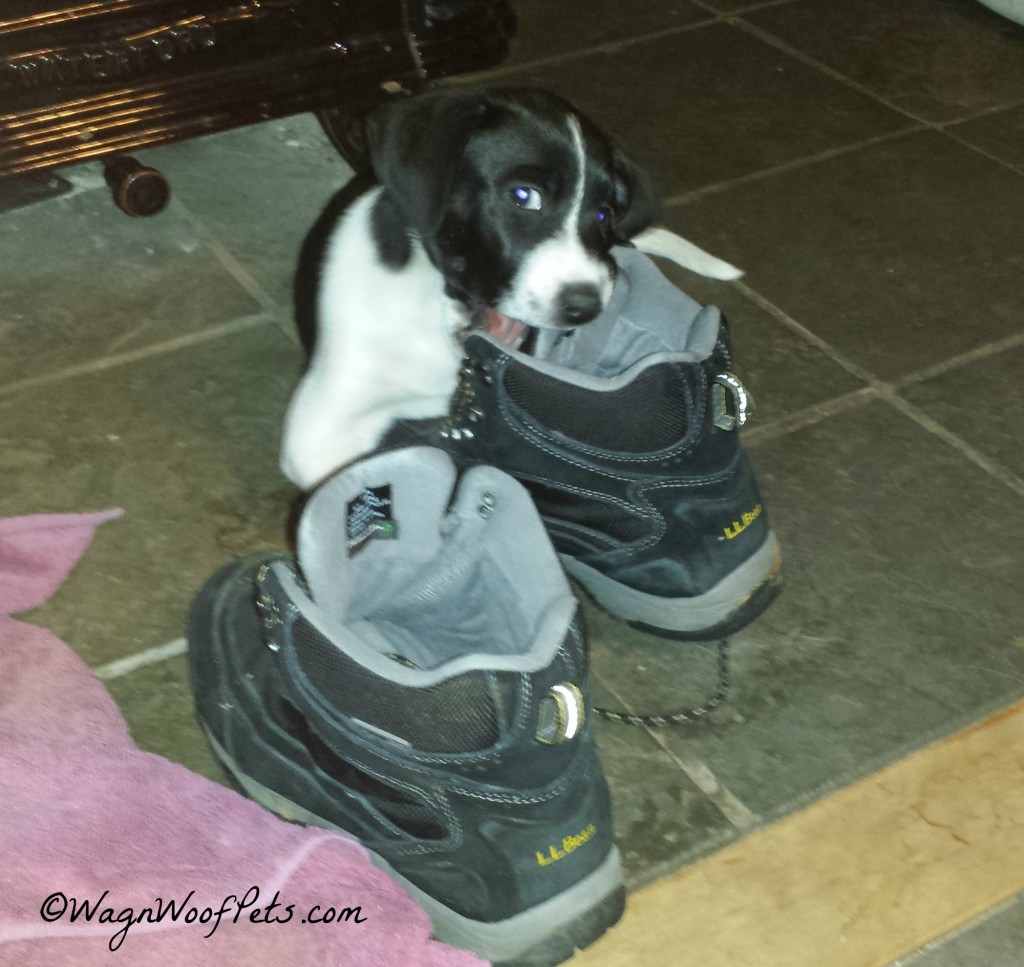 Boots/slippers/shoes of any sort are his favorite.  And who knew Chuck-Its were chew toys as well as ball throwers? 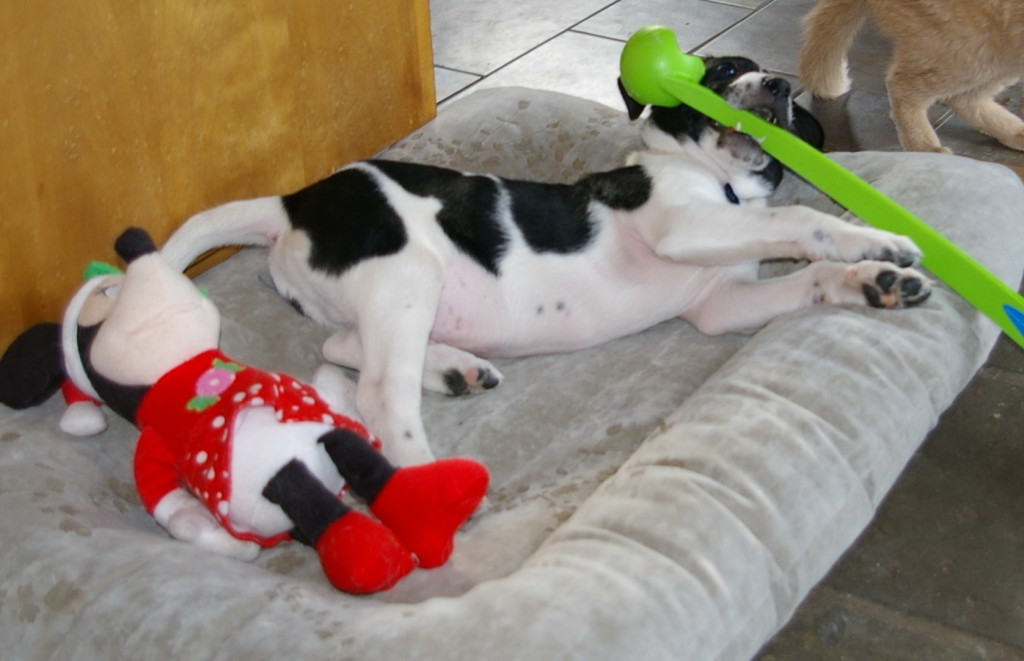 Then of course there is the ever popular empty Christmas paper roll. 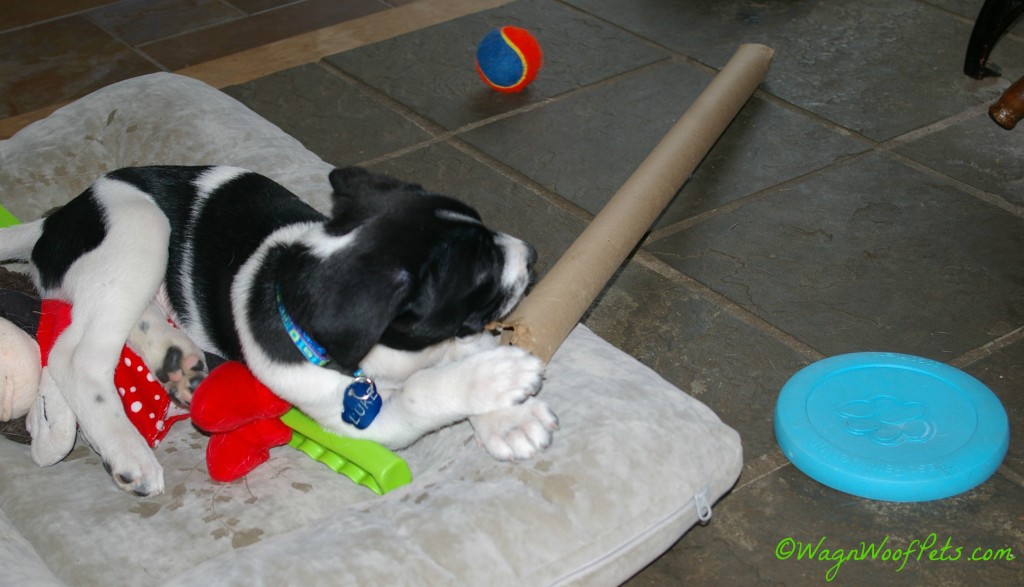 He is obsessed with food and treats, and wants to eat anything and everything, food or not.  When I had him outside today I couldn’t get him to stop eating grass and whatever other greenery he could find under the deck.  We won’t discuss the other thing he wanted to eat out there.  We’ll just say we have to scoop that poop in record time if we want to get ahead of him!

He has already figured out where the treats and food are kept in the kitchen.

Now that I think we’re finally done with all of our holiday socializing and he is settling in well, we will need to start working more on his training.  He’s picking up a little bit here and there but when those treats come out he gets VERY excited! 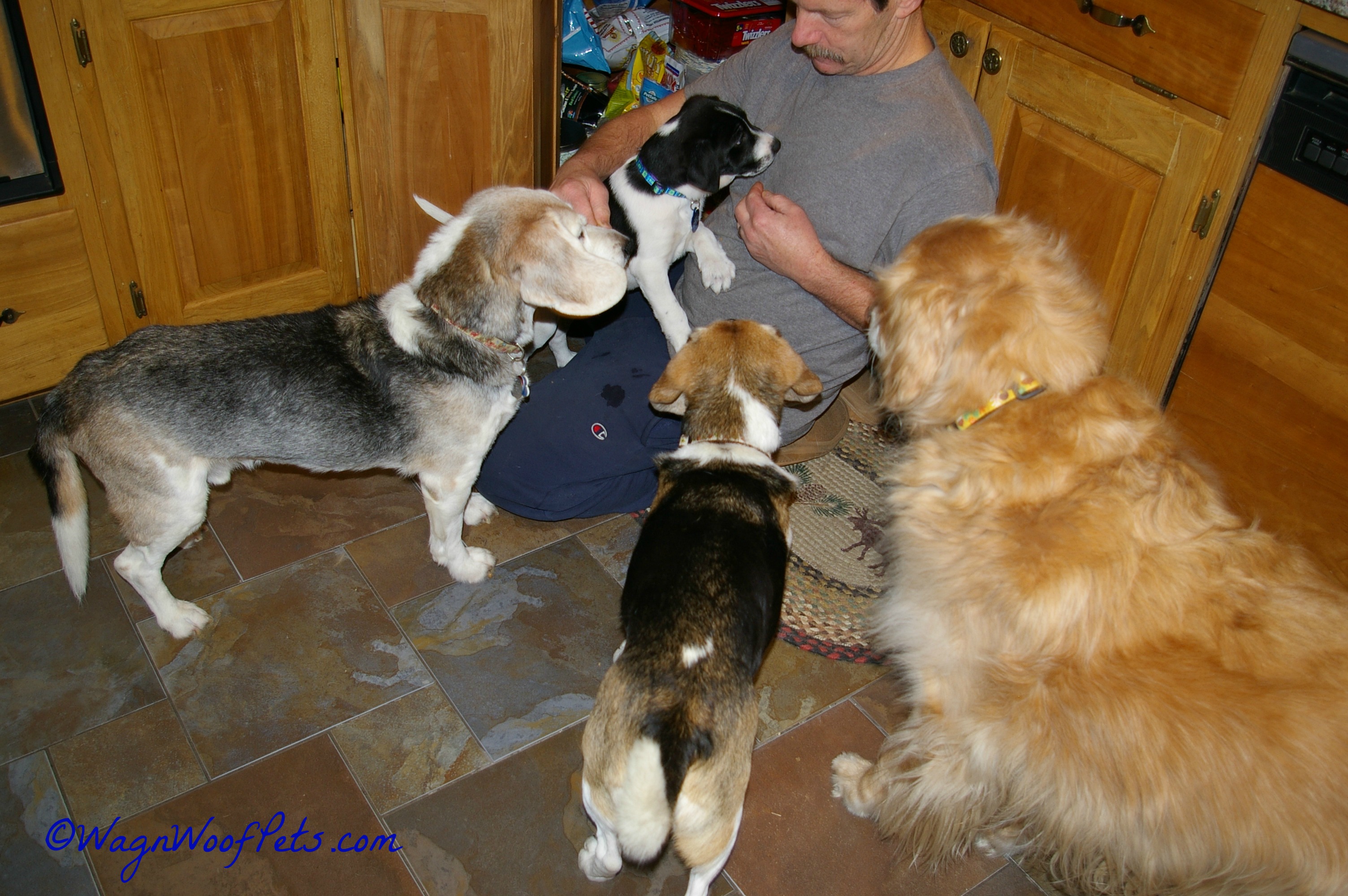 Last night we let our company sleep in our bedroom and we and the dogs slept downstairs on the couches.  After they had their breakfast, I brought Luke up to cuddle with me, and Cricket came and laid with us also! 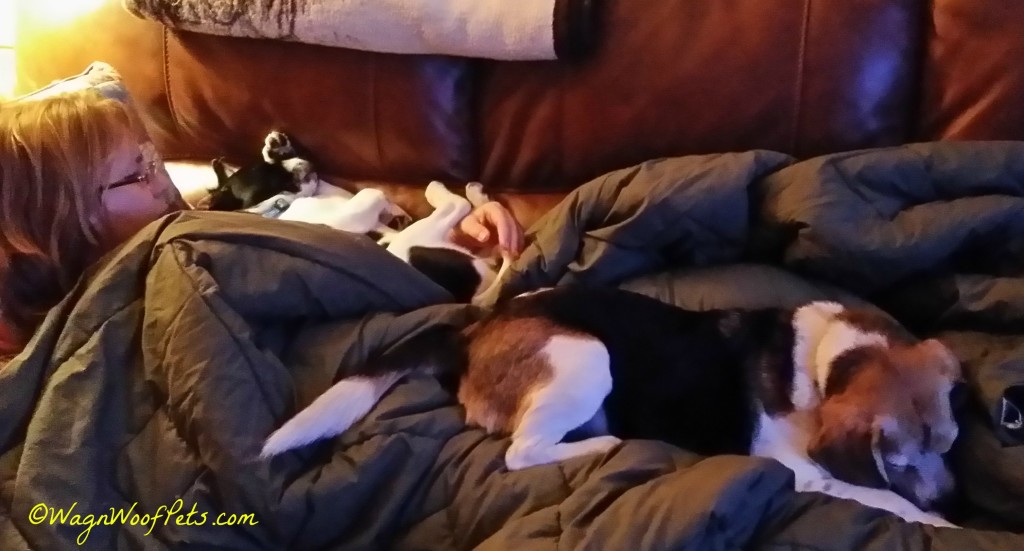 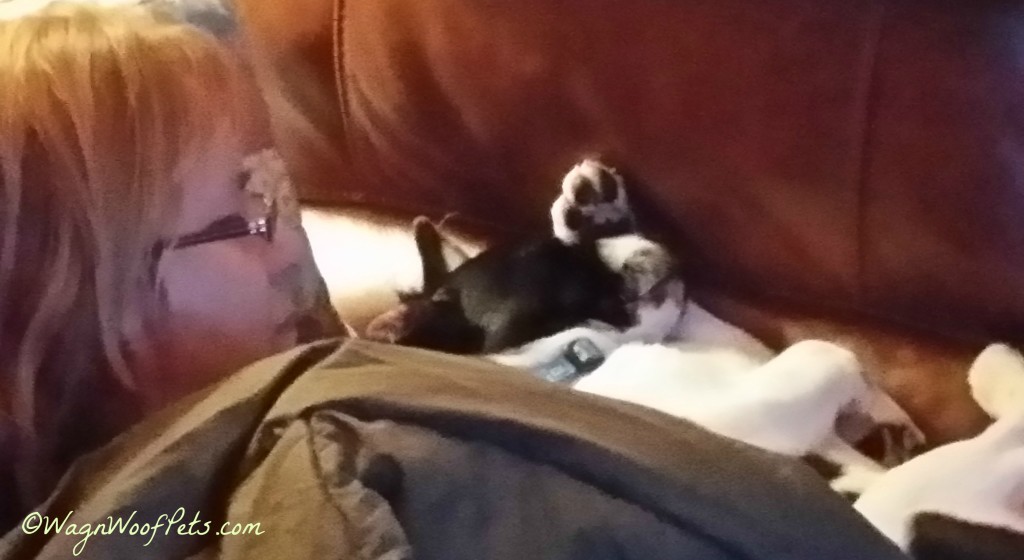 Mischief aside, I’d say the little guy is settling in quite well.  We couldn’t be more happy!

Many thanks to our Monday Mischief blog hop hosts: Alfie’s Blog and Snoopy’s Dog Blog! Please visit their sites and others through the links below.