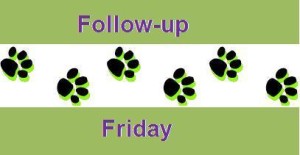 Welcome to the New Year!  We are ready for it here.  We’re joining Heart Like a Dog for Follow-Up Friday, the hop that wraps up the week and leads you into the weekend.

We are also joining FitDog Friday since we’ll be elaborating on our fitness goals for the new year!  Thanks to the hosts SlimDoggy, Peggy’s Pet Place, and To Dog With Love.

On Monday Mischief I shared how things are coming along with our new puppy, Luke.  He has taken well to his crate and sleeps through the night.  The other animals are slowly adjusting to him.  He has really learned to respect Kobi and mostly leave him alone.  Kobi is our most easygoing dog but he was the first one to really give Luke a good correction instead of just running away from him.  I wish I could have gotten a photo of Luke laying quietly on the dog bed next to his big brother yesterday.  Last night he was licking Kobi’s ear, and never even threw a nibble in there!

One of the reasons we wanted a puppy was the hope that it would make the other older dogs more active.  Meaning the two girls, at 13 we don’t expect much from Kobi other than some good walks.  The first day Luke came home, our plan worked, because the other three dogs were definitely much more active….avoiding the puppy!  All 3 were on the move to get away from him, and the two girls spent most of the afternoon outside playing fetch.  Even Kobi spent more time outside….it was a warm day that day so he got lots of fresh air.

That really wasn’t what I had in mind.  However, we’re getting close to two weeks in, and we are starting to see what we were hoping for.  Cricket especially is starting to instigate games of chase and bitey-face with Luke.  They all started on the bed this morning and we had to get Kobi down so he didn’t get run over!  Sheba will strut around with a toy in her mouth and put it close to Luke and play growl to try to get him interested in it.  There’s been some tug of war, and there have been some times when they all just lay together chewing on their own toys.

It’s not perfect….the girls still have their times when they just don’t want to play.  Luke doesn’t always understand that, poor little guy!  But in addition, they’ve been outside playing chase in the snow some, though Luke is still adjusting to the cold and doesn’t last long out there.  Now we’re into subzero temperatures for a couple days so play sessions outside will be very short anyway.  We have plenty of snow on the ground now though, so when the temperatures improve there will be a lot more games of chase in the snow.

For Wordless Wednesday, I shared our New Year’s Resolutions as part of the Resolve to Move Your Mutt blog hop.

Kobi’s is to go for more walks.  We get out as much as we can considering the winter weather.  We’ve had two big snowstorms lately and now with the temperatures dropped to subzero wind chills, I feel it is just too cold to take the old guy out there.  But when it’s reasonable, we put his Pawz on and out we go.  Our walks are even longer now than they were in the summer.  The cold doesn’t bother him really.  The only time he wanted to turn around was the other day when the road to the tree farm wasn’t plowed, and even in tire tracks the snow was deep.  As soon as it warms up, I’ll be out blazing new snowshoe trails to take him on.  Even with the back leg issues Kobi has he keeps on going.  Once in a while he’ll lose his balance in the snow….he just gets right up and goes on.  It bothers me more than him I think.  The other day I had his leash and harness in hand, let him out of the fenced yard, and he went running down the driveway!  I caught up to him halfway.  The time before that he chased a squirrel up a tree (I had him on the leash that time)! 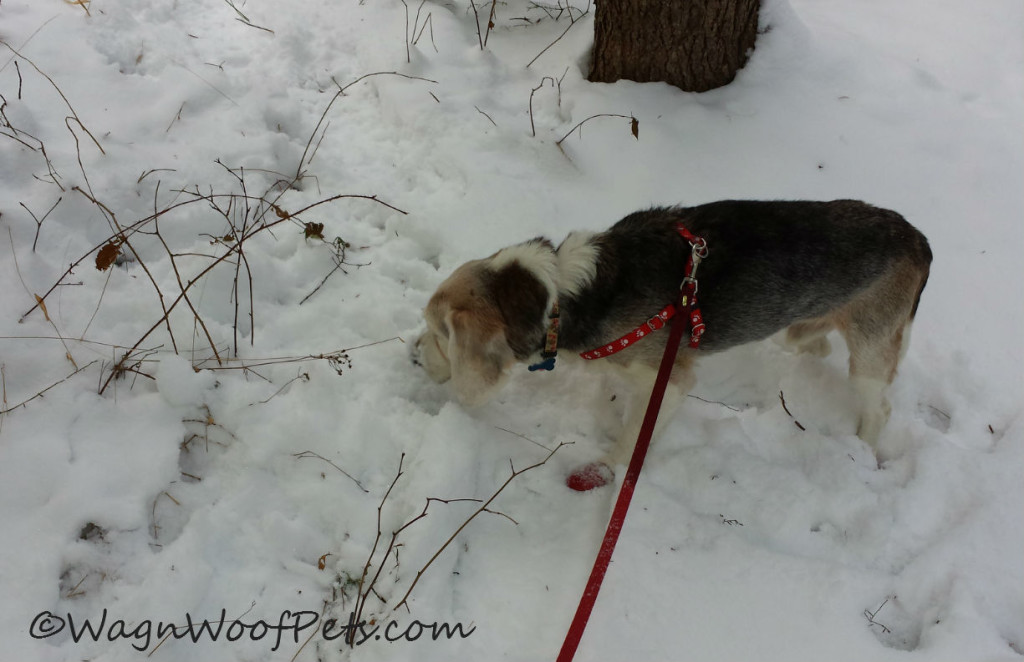 Cricket is going to work on her leash walking skills.  Step one in that process is to try to reduce her intensity, and get her to relax and enjoy the walk more, instead of just plowing forward.

Sheba is going to work on her hind legs.  Since she has arthritis in her front shoulders/legs we want to strengthen the back.  Our first official session of SlimDoggy squats is later today.  I hope to add a K9 Fit Vest later to increase her workout intensity.

Luke resolves to be a good student, and learn lots of new things!  We had our first structured training session today, and the first things we are working on are “sit” and “come”.  He definitely responds to his name now, and he is starting to understand both of those commands just through our everyday repetition.  I also put a leash on him for the first time today and took him outside briefly.  He did pretty well!  Oh, and he’s also starting to learn to go down the stairs as well as up!

My resolution is to spend less time on the computer and more time with the dogs.  I already had a jump start on that before the new year began.  When Luke came home I was basically on the computer for brief spells only.  With all the holiday activities and a new puppy I just didn’t have time to be on here much, and that helped to detach me from it.  I think I will be able to find a balance that works, because I don’t want to miss a minute of Luke growing up.