Luke turned 2 years old last week, and it’s been over 2 months since we’ve had a Monday Mischief post! I have to be honest, I miss it. I miss all the silly puppy antics. I miss when I’m still in bed, and my hubby leans over to hug me goodbye, and Luke would stick his head in between us and lick us to death.  I miss this….. 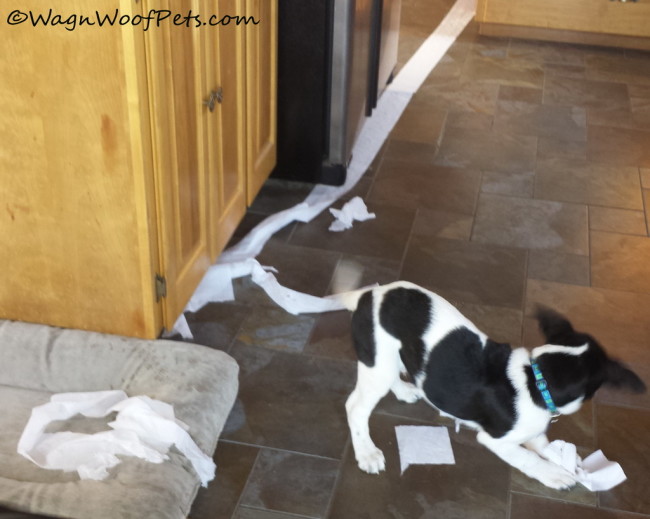 Luke is really an amazingly well behaved young dog. Sure, he has his moments, and there was a spell not too long ago where he really wasn’t listening to us very well. But that seems to just have been a phase.

Now this lack of mischief is not all due to his perfection. We’ve also learned how to manage some of his mischief. Our rolls of toilet paper do not go on the roll hangers on the wall…they sit on the back of the toilet out of reach (or temptation…I’m pretty sure he could reach them there if he wanted to). Every once in a while my hubby leaves one out just to test Luke (really, he just forgets) and Luke flunks the test most times!

We’ve also learned to keep food as far back on the counters as we can. Counter surfing is a constant challenge with Luke. It wasn’t that long ago that he ate almost a whole stick of butter because we had left the cover off the dish. He knows how to use his paws, and has a pretty good reach with those long legs. But when we try to set him up for training, like putting something on the edge of the counter and trying to catch him going for it, so we could use the clicker to train him to stay “off”, he won’t go anywhere near it. Yes, he’s just too smart sometimes!

If he does manage to get his paws on something we don’t want him to have, he knows it, and he won’t listen to the “leave it” command even though he knows very well what that means. He has gotten better with “leave it” though, and if you’re in the house he will stop and give you what he has. But if he’s got it outside where he can run around with it, all bets are off. Watch the short video below to see what I mean.

I set him up for that by deliberately dropping my gardening glove on the ground (he loves those gloves and often tries to steal them right out of my hand if I’m holding on to one and not wearing it). We bloggers have to do what we have to do! It’s times like those that the only thing that will work is getting a treat and doing a “trade”. I’m not smart enough to always have treats in my pockets, so if he gets a hold of something I really don’t want him to have, I am scrambling to run back into the house and get some quickly!

There is one other time he won’t listen to “leave it” and that’s when he’s eating poop. The only dogs we’ve had that were poop eaters are our beagles. So once again, Luke shows he just might have some beagle in him! If I see him from the house eating poop or with a forbidden object though, and yell “Luke, here” in the right tone of voice (it has to be a playful/happy, not stern, tone), I can get him to drop it and come running. When he comes in the house we give him a treat and/or lots of praise.

The only other issue Luke really has is that he’s whiney. It’s mostly in the evening after his supper, and when I’m working on my computer. He’ll just sit there staring at me and whine. The only thing that will appease him is a new toy. And yes, it has to be a new toy. We don’t have an endless budget for toys, so that can be challenging. I try to be careful not to get up and get him a toy or give him attention until he stops whining. If we haven’t done any training that day, I’ll take him and we’ll work on his tricks.

I try to get him enough exercise. I think I need some kind of puzzle toy for him perhaps. I don’t want a treat toy, because then the girls will just push him out of the way for it unless I separate them. I think I’ve seen some that are just soft toys that can be taken apart?

I’m just grateful that he has some mischief left in him, and the fact that I feel that way surprises me. There was a time when I was happy to have older well behaved dogs that didn’t have to be entertained all the time. Luke seems to have changed all that, maybe because he was such an easy puppy. Apparently he’s not the only one now that needs to be entertained, and I’d hate to have to get another puppy to appease my apparent need for mischief to amuse myself (and write about)!

If you have older, well behaved dogs, do you sometimes miss the entertainment and antics of a puppy, or am I just crazy?

We are joining the Monday Mischief blog hop. Thank you to our host My Brown Newfies. Please visit other blogs through the links below for more mischief fun!