Living with a fearful/reactive dog is extremely challenging, and we celebrate every small step we take forward, and every time we find a solution to any issue. We have two good (or mostly good) things to report on recently! 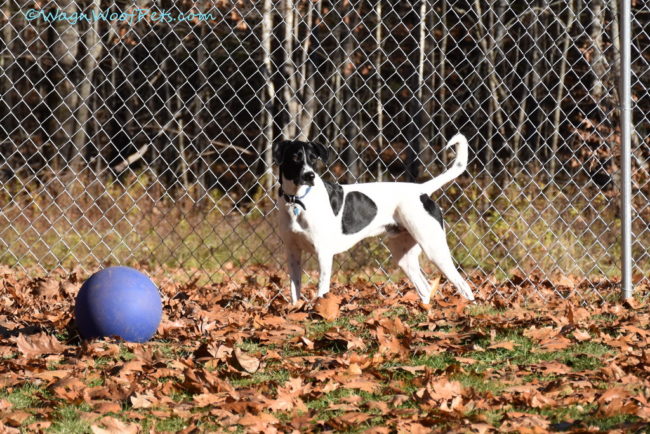 Luke had his yearly veterinarian appointment yesterday. I recently mentioned how I’ve been working with him and a basket muzzle to get him ready for this. I wanted him to be comfortable with the muzzle when going into the vet’s office, and not have to have one of theirs put on when we got there.

I’ll say that the visit went “as well as expected” (I was not very optimistic), but maybe even a little better than that. First of all, Luke did so great with the muzzle! At first he balked at having it put on in the car, but ultimately he let me do it. In addition, he never tried to paw it off the whole time we were there.

However, our vet was unable to perform any type of exam on him. He completely freaked out when she tried to approach him. He wasn’t due for any vaccines this time, but he needed a blood test in order to stay on his heartworm medication. That wasn’t going to happen.

This was another situation which reminded me why we love our vets so much, and everyone in the office. They were all so understanding, they all gave Luke his space and ignored him as needed. Ultimately, my hubby just walked Luke around the office so she could observe him and see how he looked.

On the good news side, she thinks Luke looks great and is at a perfect weight, and we talked extensively and she feels good about everything we’re doing with him. On the bad news side, it looks like we’ll have to have him sedated in order to do that blood test and a thorough exam. We decided to put it off until spring, since it should be OK for him to be off the heartworm meds for the winter (we normally do year round on our vet’s advice).

It’s not our preference to do it that way, but we must balance keeping him healthy with everything else. If they put him under they can also trim his nails which he needs. We will continue to work with him through the winter in the hopes things might get better, but we need to be realistic. I’m reassured by the fact that Luke has been sedated on two other occasions (neutering and having his knees checked) and he did fine.

The other good news is that Luke calmed down a lot while we stood there talking, with several other people in the room. He even approached our vet to sniff her, and though he wouldn’t take treats at first, he did later. A man came in to buy food and he barked and growled briefly but that was it. Now that we know he’ll do well with the muzzle, it’s a tool we can use to help work on his issues with strangers. I’m planning to write a whole post on the muzzle issue at some point. I think it’s a valuable too that has a stigma attached that it shouldn’t.

I wrote back in August that Luke had developed fear issues with large trucks coming into our yard. I got some valuable suggestions from readers, and our friend at 2 Brown Dawgs even wrote a post on the subject: Don’t Turn a Little Thing into a Big Thing.

I want to thank her and Forest Poodles for suggesting that letting Luke see these trucks and not to make a big deal about it might make things better. We had a couple occasions to work on this over the rest of the summer and fall.

Our town did work on our road a couple of times. The first time a large piece of equipment moved slowly down the road I saw Luke start shaking so knew he was scared. Instead of taking him away from it, I just went up to the fence where we could see it. I talked in a normal voice, patted him just a little bit, and he stayed there watching with me. Then we just continued playing ball and I let him choose where to be. Luckily this truck went up and down the road a few times so I continued to do the same, and when we were back in the house I did the same thing going up to the window. I praised him lightly for being a brave boy when he joined me.

I am so thrilled to report that the next time this happened a few weeks later, Luke only looked a little nervous! He shook a little bit but soon stopped and as we went through the same exercise he got better and better.

We have so much more to work on with Luke, but every time we have a success I allow myself to just focus on that for a while and let it give me hope. Knowing that progress can be made will keep us going forward no matter how challenging each step might be.

What successes have you celebrated with your dogs?