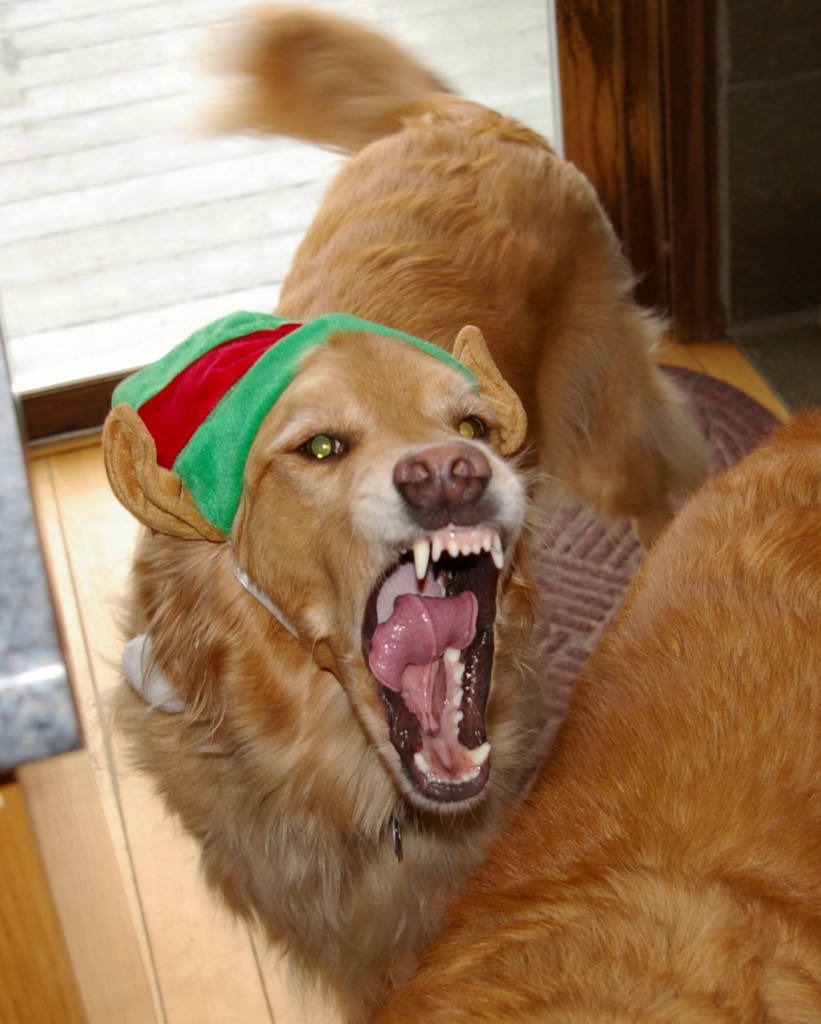 This is the scariest Halloween photo I could find of one of my dogs.  OK, I know, Sheba is wearing an elf hat.  Yes, it actually is a photo from Christmas.  However, the expression on her face represents how all of my dogs feel about any kind of “dress up”.  The elf hats were a bust, so Halloween costumes have never even be tried.  I look longingly at all the cute photos of dogs on Facebook, in their adorable costumes.  Mine will have none of that.  In fact, they act like it is torture for me to just put a harness on them.  Even though he knows it means he’s getting a walk, Kobi runs away from me when he sees the harness coming.  He especially hated the gentle leader, but we don’t need that any more so now he has a more comfy harness, and he still hates it.  Eventually he will give in and come to me (or at least stop moving so I can get to him), and then he stiffens himself up like a board and barely tolerates what I am doing to him!

That same Christmas that the elf hats came out, I put a jingle bell collar on our cat Katie.  That went over even worse.  She proceeded to tear around the house like a cat possessed, thrashing and flopping, like I had just thrown a bucket of water on her or something.  I eventually caught up to her long enough to get the offending collar off, and that was the end of that.

The most that the dogs will put up with are bandannas, so every Christmas they get those put on, and on other special occasions, but that is it.  I’m sure they probably don’t really appreciate that either, but they do like to humor Mom once in a while.

Halloween is pretty much a non-holiday in this household.  We don’t have young children, and we live in very rural area with very few trick-or-treaters.  Now we just shut off the lights so none of them come at all.  That would be because the mere sound of a knock on the door puts four dogs into full bark mode, which is not a fun experience for any of us.  These are dogs who bark at the sound of a doorbell on the TV.  We have never had a doorbell, so I’m not even sure where that comes from!  I don’t feel right confining the dogs to a closed room for 2-3 hours while we wait for trick-or-treaters that don’t often show up anyway.  So we discourage that by not lighting up the house.  I feel vaguely guilty about this….I remember when I was a child, when trick or treating was a real event in the neighborhood.  There was one house on our street that always turned the lights off and locked the door on that night.  We thought they were mean, crabby, child hating people, but maybe they just had a dog or dogs that liked to bark?  I don’t remember that they did though, and I still kind of feel like the mean people on the block.

So I will enjoy the photos of pets in costume on Facebook.  Maybe you would like to email me some photos of your pets all dressed up.  I would love to see them!  I will also post them on here and on my Facebook page.  You can send them to me at jank@afarmgirlsfinds.com.  Thanks for sharing, because I really will enjoy them!

Please keep your pets safe this Halloween.  Keep your black cats indoors, if you don’t already.  Be careful your dogs don’t get into any candy, and be careful no pets escape if you are opening the door for trick-or-treaters.  That is if you are lucky enough to able to have any!