Some days I believe the animals around here are tag-teaming me in the mischief department. For example:

One morning recently I was sitting at my computer enjoying a fresh muffin for breakfast (if you’ve read our Positive Pet Training post from last week, you might know where this story is headed). Suddenly a racket started up outside, so Luke and I went running to the window to see what was going on.

It was one of the chickens, squawking away about something. She kept carrying on, and we spotted her by the corner of the house coming out from behind a bush.

I had an idea what might be going on, so I grabbed my camera and went outside to inspect.

Remember our post about “The Egg Song”? I had a feeling this hen had decided to lay an egg somewhere other than in her very nice nesting boxes inside their coop (at least she has the courtesy to let us know). I was right and found this behind the rhododendron bush: 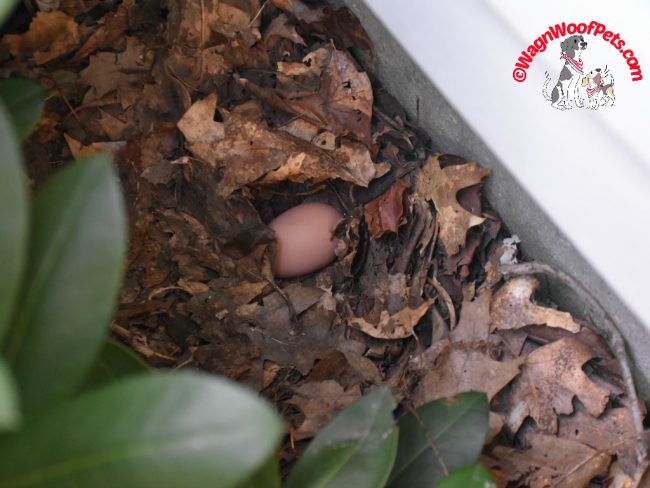 Meanwhile, back in the house, Luke had consumed the half of my muffin I had left on the table while investigating all this (it’s the curse of being a pet blogger and always looking for “a story”). There’s a reason I call him an “opportunist”, our boy never misses a trick.