Tuesday morning I wanted to take Cricket for a jog.  We had had a busy three day weekend with lots of play time in the yard.  Monday afternoon my sister and I took Sheba and Luke for a 4 mile walk.  Cricket stayed home with Dad….she had been playing all morning, and she does most of the running/work when we’re playing fetch, so I figured we’d take the other two to get some more exercise.  However, I wanted Cricket to get an outing too.

I spent a little time on the computer while waiting for the darkness to lift, and the temperatures to rise just a bit.  I happened to read a blog post at Something Wagging This Way Comes, titled “Stop Stressing Out Your Dog“.  The idea behind Pamela’s post (you can click on the title to read it yourself) is that perhaps our dogs are stressed because we make almost all of their choices for them, causing them frustration by never giving them any control over their lives.

We headed out and walked a bit before I broke into a jog.  Only Cricket didn’t join me……she lagged behind.  She clearly didn’t want to jog.  She does this from time to time but usually gives in when I persist.  But then I thought of Pamela’s post and decided not to persist.  What would it hurt me to walk instead of jogging, if that’s what Cricket wanted?  She was probably tired after our busy weekend.  So we went at her pace.  I still got to jog a little when she sped up, but mostly she had her nose to the ground smelling the fall smells.  Believe it or not, that is unusual for our little beagle.   I have written before about how Cricket’s walking style is usually to pull forward and go, go, go, which is one of the reasons I’ve chosen her to jog with.

We had headed towards the Christmas tree farm, but when we came to the path that leads to a small pond, I let her choose to go that way.  We have deer in the area and she was probably following their trails.  We don’t often walk past the pond because I’m not sure who that property belongs to and don’t want to be intruding, even though the closest house is the other side of the pond.  Since it was the middle of the day on a weekday I figured no one would be around anyway.

As we approached the mown field at the top of the hill above the pond, I looked out and saw a house that sits on the opposite hill.  We can’t really see too much of that house from the road, but I know it’s for sale, and I have dreamed of buying it.  It’s far more private than our house, and away from the paved street which our house sits close to.  Plus it overlooks this lovely little pond!  The original plan for the subdivision we are part of was for there to be a pond at the bottom of our property, but that never happened.  This house, however, is way out of our price range. 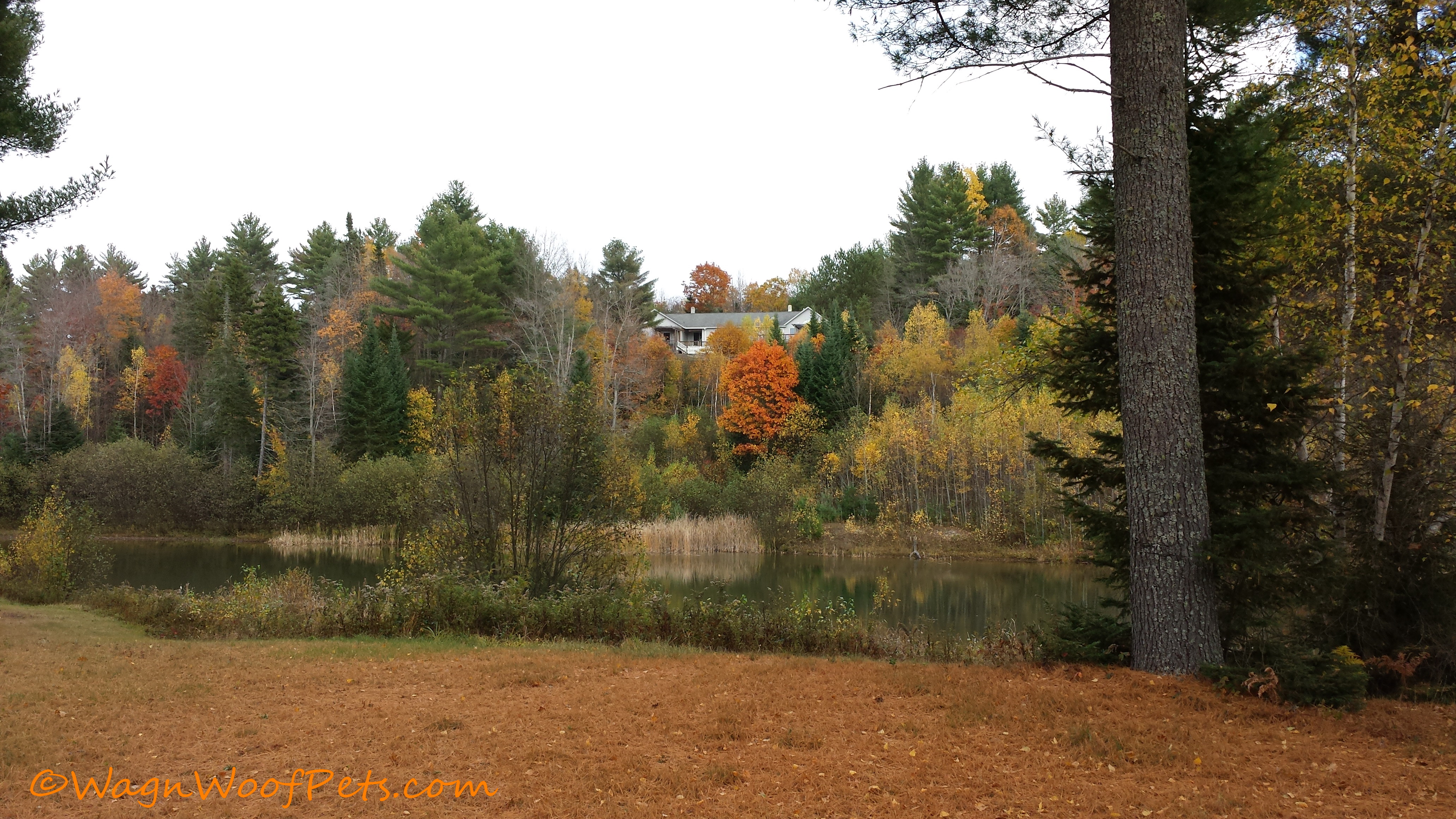 When we had our house built in 1993, we had bought the first lot that was part of this same subdivision.  Our lot was one of two on the paved main road, and the rest are off of this side street, and larger than ours.  We bought what we could afford at the time which was a smaller lot.  Our original house was very small, though we have expanded quite a bit over the years.  There were no houses down here, there wasn’t even a tree farm or a pond back then.  We used to walk down here with our first dog Shelby, making a big loop on a dirt road and trails with nothing but the woods and signs of wildlife to see.

I realized where Cricket had led me was part of the original path we used to take years ago.  I tried to remember exactly where it had gone, because there were two trails leading away from the field and towards the house closest to the pond.  It looks so different now that I can’t be sure.  But I enjoyed the memories that flooded back as we stood there.  Later when reflecting, I also gained a new appreciation for my own home and all we have done to it over the years to make it into the home we wanted.  We may never have that pond down below us, but we are now in the process of finishing our screen porch into a 4 season porch that we can enjoy year round.  We have our own house on a hill with beautiful views of the mountains.

I have two points to make here.  One is that exercising with your dog can be good for your mind and spirit as well as your body.  The other is that we can sometimes give our dogs freedom to make a choice when it comes to their own fitness and what they want to do or where they want to go.  Cricket likes fetch more than walks or runs, so we try to do both with her with more of an emphasis on fetch.  If you let your dog sometimes follow their nose or their instincts, you may find that they lead you both someplace unexpected and enjoyable.

We are joining the FitDog Friday blog hop.  Thank you to our blog hop hosts SlimDoggy, To Dog With Love and MyGBGVLife.  Please visit their sites and others through the links below to learn more about keeping your dogs fit and happy!