A Bump in the Road

Our plan of training Luke to go to his bed when people come to the house was  suggested and taught to us by his trainer, but not put into real practice until our formal training sessions had ended.  We invited my oldest sister and her husband over, as well as my other sister.  The plan was for them to knock at the door, and not come in until we had Luke settled in his bed.

I’m not sure it could have gone much worse.  First of all, Luke gets pretty wound up when he just hears a car pull into the driveway.   He was already barking at the door long before my sister got to it (we asked them to come one at a time so we could have more than one practice).  He just would not listen to us when we tried to get him to his bed, and once we did get him settled, her knocking at the door just started it all over again.  Same thing when we actually let her in.  Now, keep in mind, Luke has met my sister before, but she hasn’t been over here for a while.  It simply wasn’t working, but I wasn’t smart enough to just abort the whole thing and take him upstairs.  Instead, we brought her husband in which set Luke off again.  We instructed him to ignore Luke completely and just come in.  Luke was settled on his bed at that point, but when my brother-in-law walked by he reached his hand out, Luke went off, and honestly, I thought he was going to bite him (he didn’t).

I held on to Luke while they went upstairs.  I followed with Luke after they were sitting down and at that point I was able to get him to go to his bed up there and pretty much stay in it.  They could quietly reach their hand down with a treat only if Luke approached them nicely.  Those two parts went well, and as long as they stayed seated Luke was fine.  I continued to feed him treats as he stayed in his bed.

When my other sister arrived I went outside to get her, and Luke did bark but was much better.  He’s seen this sister more and he greeted her normally (she has been our pet sitter and stayed overnight with Luke at least once).  However, I was feeling pretty discouraged by the end of the evening.  I tried to focus on the things that went right:

I feel like we just need to regroup and come up with another plan.  Even though I’m disappointed the clicker training couldn’t solve this issue, it has helped in many other ways (that is how we have trained him to go to his bed at all).  We have more than one other thing to try.  I was hoping to have things better by Christmas, but I just need to resign myself to the fact that Luke will probably have to be confined to the office with a gate when there are a lot of people here.  But we’ll use the first couple of arrivals to work with him.  We will not give up!

Do you have any suggestions or experience with this issue?  Please feel free to share in the comments!

I’ll fill you in on our other ideas in future installments of this series.  I also plan to cover bad habits we’ve had to break and loose leash walking, the most challenging aspect of clicker training (for the humans)!

We are hosting the trivia question for today’s #Advent4Dogs giveaway! 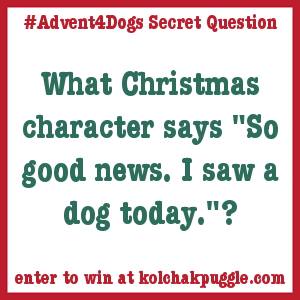 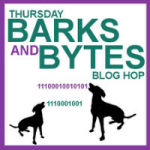 We are happy to be joining the Thursday Barks and Bytes blog hop.  Many thanks to our hosts 2 Brown Dawgs Blog and Heart Like a Dog.