I’m having a tough time getting caught up and back into the swing of things since our staycation. The truth is, since I’m going away to Maine for a couple of nights with the girls in about a week, I don’t really see much point in getting back to routines just to have them disrupted again. So for now, I’ll just keep plugging along and doing my best.

One of the things I felt worst about after staycation was not getting Sheba out swimming that week. Between her not feeling well early in the week, some crazy weather (we had one day that didn’t even reach 70 degrees!), and all of the commotion it just didn’t happen. So I made it a priority this week to take her.

It’s been a hot week so the new swimming spot we had found was occupied by some kids. Sheba would love to see those kids, and I toyed with the thought of asking their parents if they minded if she swam there. Then I got visions in my head of Sheba being SO excited about swimming with kids, that she might dunk them! I will never forget the time our Lab mix Maggie tried to drown me. We were at our campground and I jumped into one of the wonderful swimming holes in the river there, and Maggie was so excited she started paddling towards me and then on top of me! Luckily I think hubby heard me yelling and was able to get her to come away from me. So I thought better of letting Sheba swim near any kids. 🙂

There is a brook coming out of the dam where we parked for the beach and that was an option I had planned to explore if we got there and the beach was occupied. There were just a few issues with it, but it ended up being fine. 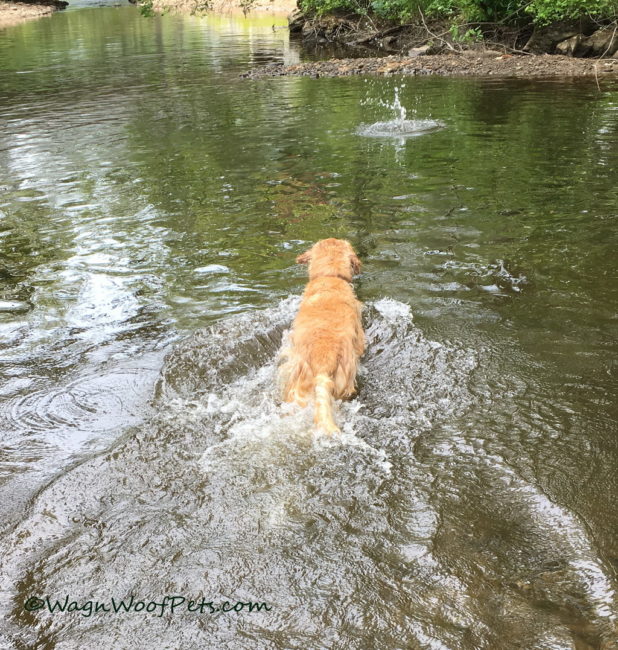 It was a nice spot to cool off, and a decent alternative to the beach when we can’t go there. I still have more of the pond (lake) to explore but it’s a long drive down the pond and I didn’t want to take the time on this day, since we were expecting a delivery of lumber at the house and I didn’t want Luke to be alone and nervous when the big truck pulled in. 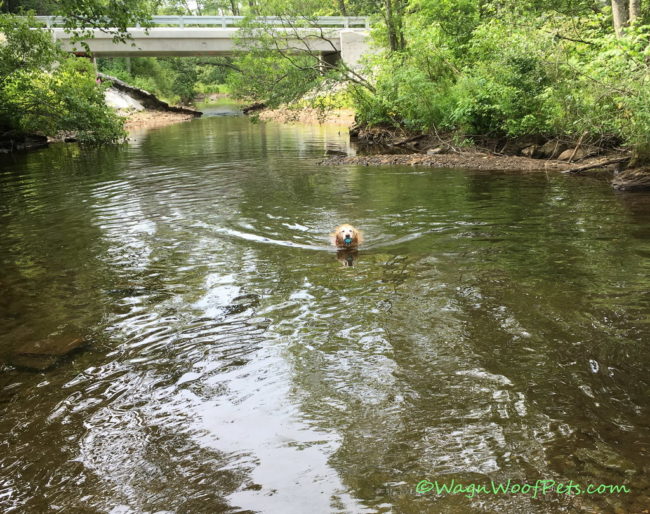 We were still able to walk up along the dam to drip off afterwards, and there is a path to the road near the beach, so we could walk a small loop along the road and back to the parking lot and stretch our legs a little. It was too hot for a long walk anyway, and our dampness plus a bit of a breeze kept us comfortable for the short one.

Of course, Sheba had a great time – our golden retriever girl loves swimming – and that was the most important thing!

Has your dog been swimming this summer? Do you have nice spots to take them?

*Affiliate links. If you order through this link we may receive a small commission (and we thank you).