If I had to choose one word to describe our beagle Cricket, many would come to mind: sweet, loving, energetic; and sometimes intense, focused, persistent, bossy, and stubborn. But the one word I would settle on would be “happy”. She took joy in everything she did, whether enthusiastically playing with balls and toys, dipping in her swimming pool, walking at full speed, or just sniffing around her yard. Her constantly wagging tail and smile, even when “yelling” at me to hurry up and throw the ball, were true evidence of that.

We got Cricket from a local breeder, and I’ll never forget her first night with us. We tried to get her to sleep in a crate next to the bed, but that didn’t last long at all. I remember holding a sleeping puppy while watching the Red Sox win the World Series. We were happy and excited about that, but there was no loud cheering since we didn’t want to wake her. I’ll never forget how tiny she was as a puppy and holding her on my chest and thinking how we had this little life to care for. Just two days before, her soon-to-be golden retriever siblings had been born. It was a joyous day in so many ways, with so much to look forward to.

We became the crazy people with four dogs and four cats, but we embraced it, even though those 3 puppies had me pulling my hair out at times!

We brought Cricket into our lives to be a beagle sibling for our other beagle, Kobi, who had been devastated when we lost his sister, our Lab mix Maggie. It took us some time to find a beagle, and she was just one of three beagles in a litter, and the last one not spoken for. We were able to visit her at the breeder on several occasions before we finally brought her home.

It’s etched in my mind the first time that little dog chased a ball, and then brought it back to me. We had no idea that beagles enjoyed playing fetch (Kobi had no interest), and absolutely no idea what we were getting into when it came to that. Thirteen years of fetch almost every day! She ruled her golden siblings and she ruled the ball games every time. If she was injured or not feeling well, no one else had a clue how to play the game (Luke still doesn’t). Cricket didn’t just love but lived to play ball, and that is the one consolation about her unexpected passing….she played ball right up until the day she died. It wasn’t quite daily just recently, but pretty darn close. There was a time I probably got tired of the daily ball play, but eventually that routine became so ingrained in me, I am now lost without it.

She did branch out at times and occasionally play with a disc toy, but only if there was not a ball available. Whatever Cricket decided to do, she did 100% and I am not surprised that even a bad heart didn’t slow her down much. 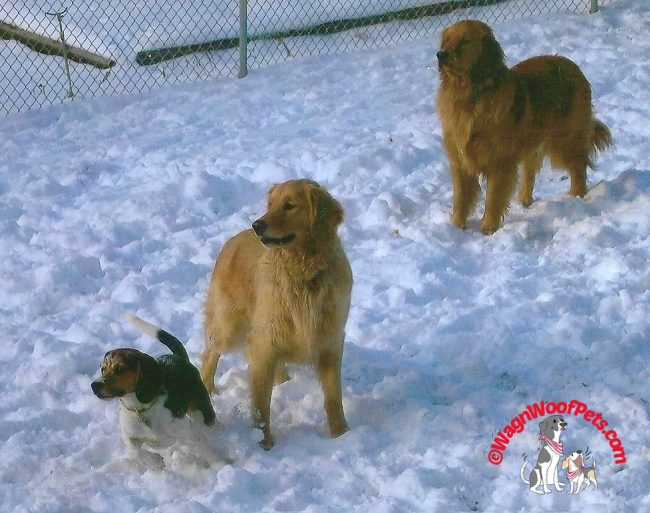 Cricket was a “princess” at times, and she liked to get her way. She not only ruled the ball games, she ruled all her siblings (other than Kobi) all the time. While I would call her the sweetest dog in the world, her siblings might have disagreed at times. There was more than once that I had to literally haul her off Sheba, and there was the time that Cricket and Moses got into a fight over a toy. I had seen it coming, and tried to get in there and intervene, but I was too late. My wrist ended up in Cricket’s mouth, and even though she didn’t break the skin (her teeth were worn down from the excessive ball chewing), my wrist was bruised and sore for many days.

When Luke joined our family, he quickly learned not to mess with that little dog, and he respected her authority. I worried about their relationship after Sheba was gone, because he did not respect Sheba (though he loved her very much). Fights might have broken out if Sheba had fought back, but she never did. I was afraid that he would push it with Cricket, who would absolutely not back off. There were a couple of scuffles over food, but in the end, Luke did learn that she was the boss.

Cricket was sweet but feisty and tough. She never wanted to be seen as weak, and that was why some of the scuffles happened with Sheba (for example, I’d accidentally stepped on her paw, she would squeal, and then attack poor innocent bystander Sheba!). That also makes me wonder if she has felt worse than she ever let on over the last few weeks, but we’ll never know for sure. We do know, however, that she was still smiling, and her tail was wagging as much as ever. Watching her cruise around the yard with a ball in her mouth, and her tail in full motion never got old.

She loved the snow in the winter, and her pool in the summer. We tried swimming a couple times, and though she could easily swim, it was not her favorite thing. When she once let a ball float away, I knew that was it for swimming! But she was not afraid of water, and she loved to cool off in her swimming pool. While her retriever siblings would only ever stand up in it, she would lay right down to cool off, often with her ball between her paws for safekeeping.

Cricket was extremely high energy, and when she was younger would play ball non-stop; we’d get bored with it long before she would. We often called her “the Energizer Bunny”. She also loved playing with stuffed toys, but mostly only if one of the bigger dogs had already destroyed and de-stuffed it. There was something about those “carcasses” that attracted her. She would make the sweetest little noises, that I called “humming” when she was chewing away on a toy.

Before Luke came along, Cricket was the kisser in the family. She would get up in your face and lick you all over until you could no longer breath! Cricket loved everyone, and often gave that same treatment to company like my sisters and friends. She could, however, sometimes be shy of strange men and there was a spell where she was always barking at my brother-in-law, who loved her (he had beagles of his own). We never did really know why.

She loved the warmth of the wood stove and enjoyed lying in front of it; though this winter the chair or couch were more her favorites. Perhaps her older bones liked the comfort of the soft furniture better, though she was still there some.

While Cricket’s rather sudden passing was very hard on us, it went exactly as I had wanted it to for her. She had slowed down some, but still enjoyed playing with toys, rolling in the snow in the yard, and standing by the pantry waiting for her treats. That morning I left for Maine, she enjoyed her breakfast thoroughly. When Dadz got home later, she played some ball.

Just before she took her last breaths, she was out in our yard sniffing around as she loved to do many evenings; and she passed away quietly in her favorite chair with most of her family beside her. Her last day here on earth, she was exactly as she had been through her whole life: happy. That is how I will remember her forever. 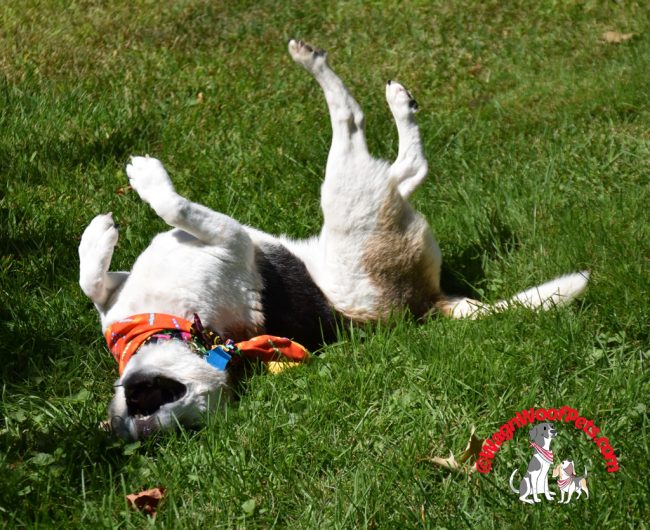 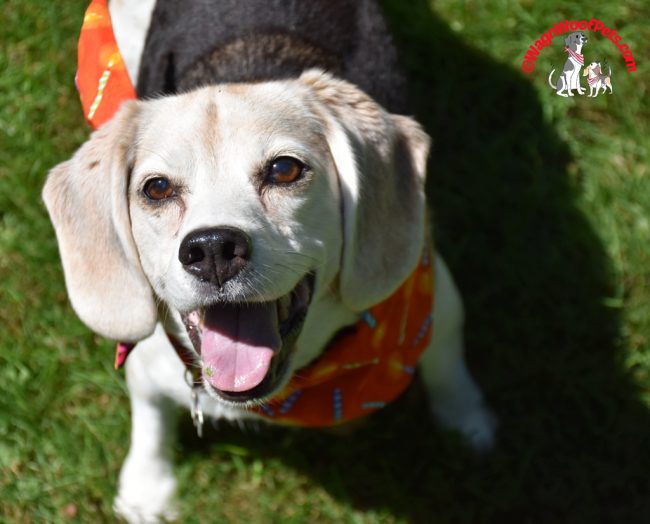