Finally, we got some fresh air!

We were excited about winter when it first started out, with plenty of snow on the ground from several storms early in December. Then Mother Nature decided to turn the temperature down, WAY down, just before Christmas. All we could do was sit inside and look out at the pretty snow. When the dogs simply go out to pee, and come back in less than 5 minutes holding paws in the air, we know it’s too cold to spend any time out there. The last time we took a walk or got out to play for more than just a few minutes in it was before Christmas.

When we heard that yesterday was going to actually get up into the 20’s, we already had plans to get out there! It was the Dadz’ day off, so he took the crew out for some ball play, and then when it warmed up a bit more (the day still dawned at just barely above zero), I got on my snowshoes to go out and blaze some walking trails (we have at least 2 feet of snow on the ground and a layer of crust in there, so I didn’t want the dogs having to break trail). I have to admit, it was kind of nice to get out there all by myself and enjoy the peace of the woods (don’t tell the dogs).

There were wildlife tracks everywhere, and a sunny day in the snow is incredibly beautiful. After lunch the Dadz and I took the crew out for a walk on the trails. Unfortunately, with the cold temperatures we’ve been having, I think that snow is still too cold for Luke’s paws, and he was holding up a paw after not too long. So we didn’t have a long walk, but it was still nice to get out there and enjoy some fresh air for a bit.

The weather is going to get worse again before it gets better, with temperatures plunging again tomorrow, but we hope with temperatures back closer to the 30’s by next week, we’ll be able to get out more. I’m going to try to get some boots on Luke, but he does not like having his paws handled, so I don’t have a lot of hope. His paws were not so sensitive last year, when average temperatures were just a bit warmer, so hopefully that will make a difference.

Even the guinea hens (and chickens) were happy to get a break from the frigid cold and come out for some fresh air. This one decided to enjoy the view from the apple tree for a bit! 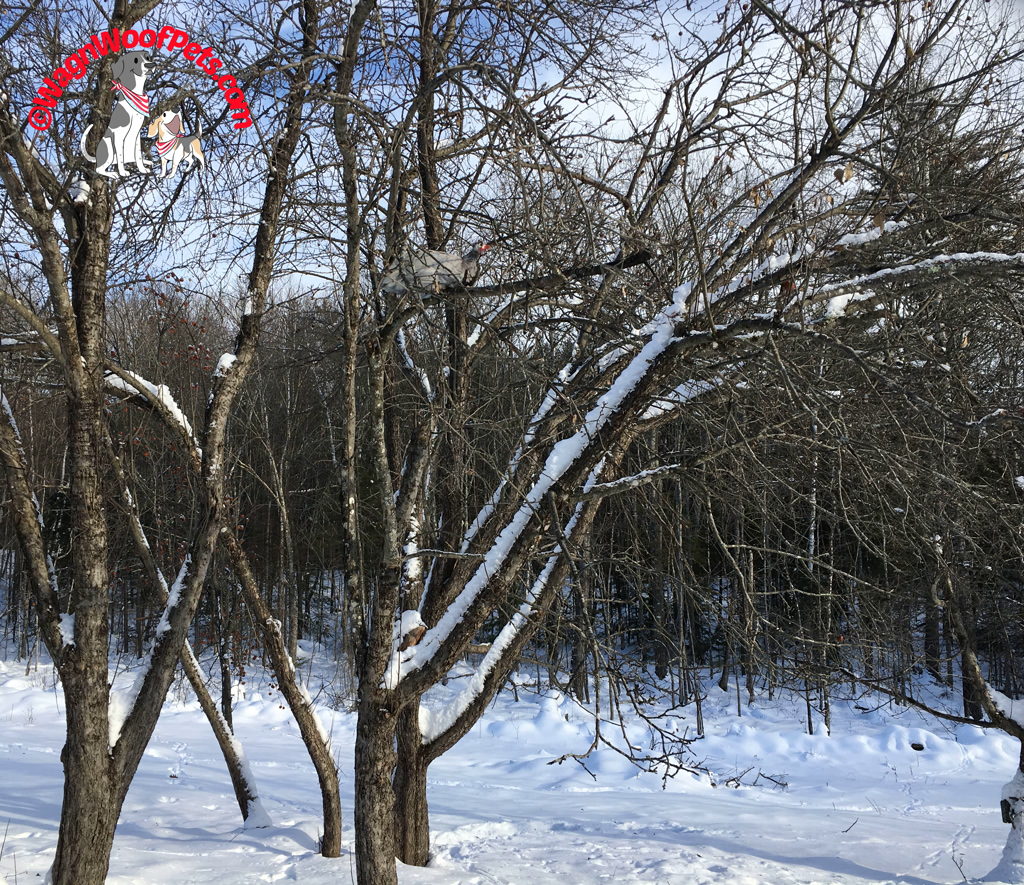 How has your winter been so far? Are frigid temperatures keeping you indoors, or do you brave the cold?

We’re thankful we finally got to get outside and get some fresh air, so we’re happy to be joining the Thankful Thursday blog hop, hosted by Brian’s Home. Please visit other blogs through the links below.