On Thursday I mentioned that we were in the process of getting a new door put in. The rain had slowed things down, and I was impatient to no longer have to take the dogs out to their pen on leashes. Later that day we finally got our door!

There was only one glitch here. That door is about 2 1/2 feet off the ground – too high for anyone to be going in or out safely (not that Luke wouldn’t try it – and be able to do it most likely!). The contractors had poured the cement for three posts for the new deck that will be outside the door, but they would need the weekend for it to dry before they are ready to build on.

I was hoping there was still some way….and Friday after work the Dadz used some Yankee ingenuity to find a way we could use it for the weekend! While I took Samantha to the vet (which went well), by the time I got back home we had this, and the dogs were all outside. 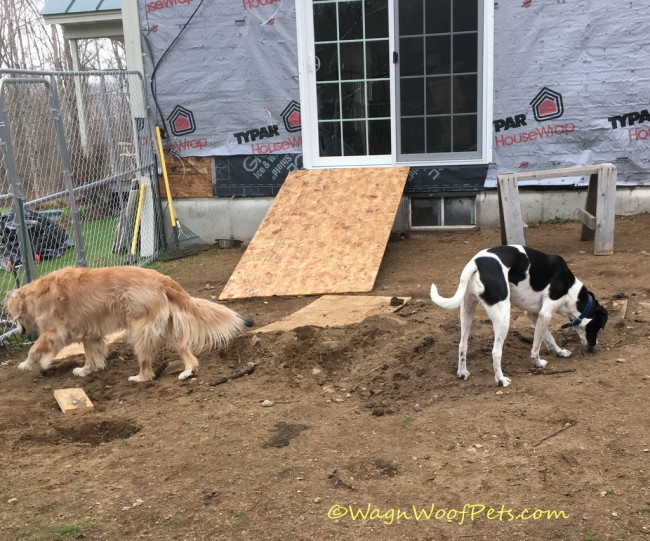 However, hubby told me that Luke wouldn’t use his improvised ramp. My answer was “Pfftttt…give me a handful of treats and I’ll have him using it in no time!” Luke almost made a liar out of me, because he balked at first, and even treats wouldn’t lure him down. I used my own ingenuity and got a leash. That was all it took. The leash made him secure enough to give it a try and that was all it took.

Sheba also had some hesitation coming in at times. Her blonde brain couldn’t figure out that she needed to go up the center of the ramp, not up from the side. On the other hand, I think she was just messing with us in the hopes that if she stayed outside we’d decide to come out and play ball! Dadz coaxed her in once or twice, showing her the way and then we’d just leave her. When she decided she wanted to come in, she could figure it out.

Not only does this mean that we don’t have to take them out on the leashes to get to the pen, but I feel so much better that I can now easily watch them when they’re outside. There are no other windows on that side of the house, so I would have to go outside to check on them, which I do often. They would always be right at the gate wanting to come in. 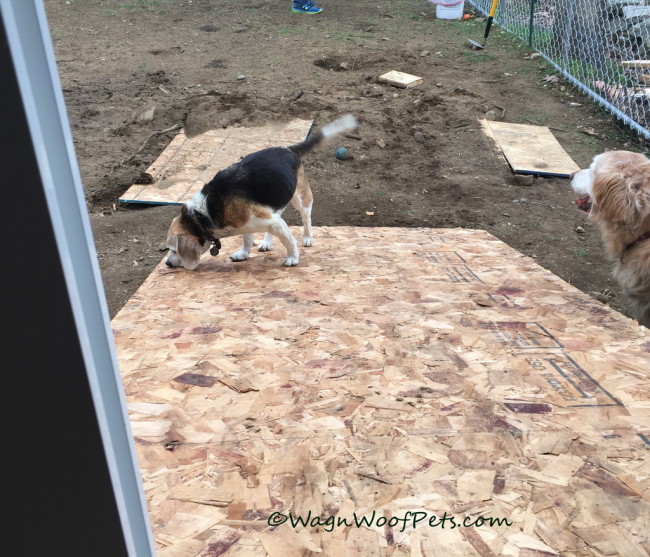 But now that they can see in too, Sheba especially seems happy to just be spending time out there. I have a feeling she’d come to the gate when I went outside, but she really didn’t want to come in. She loves to just lie outside in the fresh air and sunshine (not that we’ve had much sunshine lately!).

It actually took two of us to get the dogs out in the morning before. It was quite a process and it took us some time to come up with the best way to do it (Cricket can be wild in the morning – long story – and there had been a porcupine around as well so we needed to be very careful getting them out there); and yesterday morning, on Mother’s Day, I got to sleep in for the first time since we’ve moved!